Asia’s senior citizens being left behind by mobile revolution WHILE the mobile Internet continues to explode across Asia, recent research by the Telenor Group in four of its regional markets suggests that not all citizens in these societies are receiving access to the benefits of connectivity.

The findings suggest that the senior segment in some of these markets represent as little as 2% of active mobile users, with still fewer using smartphones.

“Given our vision of Internet for All, it is a source of concern for Telenor that senior citizens in our Asian markets are not fully receiving the benefits of the mobile Internet,” said Sigve Brekke, executive vice president and head of Asia operations, Telenor Group.

“The Internet can be a vital way of maintaining civic participation and even receiving basic citizen services in the near future, and thus the findings should be of interest to multiple stakeholders, from policy-makers to corporations, families, and individuals.

“This is particularly true as several Asian societies anticipate increasingly aging populations: We must work to achieve connectivity for all, not just the young,” said Brekke, who will be taking on the Telenor group chief executive officer role on Aug 17.

Telenor said its Asian markets have seen an unprecedented rate of mobile data growth and demand, and that GSM Association data shows that mobile broadband connections in the Asia Pacific region are set to almost double to 2.1 billion by 2017.

But the company said it remains sensitive to segments of the population that are being left behind by the digital revolution, and significant among these are senior citizens.

All across Asia, the number of people aged 65 and above is expected to grow dramatically in the near term, citing CNBC.

This rising generation of individuals who did not grow up with technology and who are not in a position to easily acquire new technical skills will be at a considerable disadvantage as the world moves online, Telenor said.

As aging populations are anticipated to be a major factor in the economic and social development of the entire region in the near future, it is important that society remains aware of senior connectivity, both as a means of preventing social isolation as well as increasing and prolonging productivity among this segment of the population, the company said.

Indeed, encouraging digital inclusion is not only socially conscious, but it can also be profitable: Already, sophisticated marketers in Japan – one of the most rapidly aging economies in the world – are beginning to see the value of tailoring products specifically to the needs of the senior segment, it added, citing an April 2015 report in The Economist.

Unfortunately, from data gathered by Telenor from its local Asian business units, it is evident that elderly populations throughout Asian markets are less engaged with the Internet, particularly via mobile.

A demographic breakdown shows that only about 10% of Telenor’s 45.6 million subscribers in India are over 45 years of age. Meanwhile, of mobile phone users in India overall, only 6% are over 50 years of age. This difference is exacerbated for mobile data users, with only 1% being 50 years or older.

Generally, non-data users have a lower income profile and higher age than the average mobile user.

Telenor’s surveys also found that the top reasons consumers cited for not using mobile data are related to perceived utility and complexity of the services. Of this demographic, 29% said they have no reason to use the mobile Internet and 24% reported that using the mobile Internet is ‘too complicated.’

In Malaysia, DiGi, Telenor’s local business unit, reports that only 3.9% of the local user base is over the age of 60.

On the other hand, data usage is strikingly higher in this higher per capita income environment: 38% of subscribers in the 60+ segment use smartphones (and almost half of users in the 0-60 segment), with 31% of this older demographic using mobile data.

Clearly, national prosperity has a strong correlation with the prevalence of mobile Internet usage, Telenor said.

Thailand meanwhile presents an interesting picture in terms of a slightly expanded user base in the oldest demographics: dtac reports a full 6% of users being over 60, although a mere 2% over 65.

This possibly reflects a more prosperous senior generation in a country with an average life expectancy of 74.2 years, as compared to only 60.2 in India.

Usage within these demographics too presents an interesting contrast to India and Bangladesh. The figures show that data penetration among the elderly is comparatively high, at 56% of users over 60 and 50% of users over 65 using data.

Smartphones, at 50-55% among the two upper age groups, far outnumbered feature phones, and mirrors the situation in similarly middle-income Malaysia.

Among the top two demographics, the male/ female split, while pronounced, is nevertheless encouraging, with 19% of Thai female users over 60 years of age and 15% over 65 using data.

Data penetration is clearly higher in Thailand’s higher per-capita income setting, although such levels among the elderly may also have to do with cultural issues – grandparents buying smartphones for teenager children, and having the mobile registered as their own – but this would need to be borne out by further research, Telenor said.

Elderly exclusion from the mobile information revolution is to some extent true throughout the developing world: Pew Research’s study of Internet usage across emerging and developing nations demonstrated that younger people (18 to 34) are more likely to have accessed the Internet than their older counterparts in every country polled, including differences of more than 15 percentage points in all but three countries studied.

The correlation of prosperity and Internet usage is also reflected in Pew’s findings in Asia, which reveal that 14% of Thais and 17% of Malaysians over the age of 50 use the Internet or own a smartphone, versus 7%, 5%, and 2% of the same demographic in India, Pakistan, and Bangladesh, respectively.

The figures should be compared with those in China, in which a full 25% of the 50+ segment report regularly using the internet or owning a smartphone.

Such lower Internet usage among higher age groups is also broadly similar with the rest of the world: In Europe, for instance, only 18% of Internet users over a three-month period aged 45-54 connected to the Internet from mobile devices, and only 11% of users aged between 55 and 74 did so.

Stakeholders need to weigh in

At the same time, given the challenges expected to emerge from Asia’s rapidly aging population, and the growing importance and affordability of the mobile Internet (often the only available access in developing markets, said Telenor), these effects will no doubt be felt all the more in Asia.

The Internet as a conduit for encouraging continued social participation and productivity can be a vital tool for senior citizens, Telenor said.

All stakeholders, from government to families and operators, should be cognisant of this impending crisis of connectivity, and be poised to respond, it argued.

From the hardware point of view, some manufacturers have already taken steps to offer handsets with larger icons and buttons, taking into consideration the physiological realities of aging (PDF).

Guidelines for website design too can ensure greater accessibility to the elderly, as has been implemented by the Government of Hong Kong.

At the same time, ICT mentoring programmes for seniors, as Telenor has successfully rolled out in Norway to encourage mobile data use, may also be effective in this part of the world. Families and loved ones of course have an important role to play in the mentoring process.

Data on India was compiled by TNS Gallup on behalf of Telenor Group Industrial Development and GfK on behalf of Uninor. Bangladesh, Malaysian, and Thai statistics were compiled and extracted from national surveys and customer data by Telenor Research, DiGi, and dtac, respectively. Thailand data represents postpaid only. 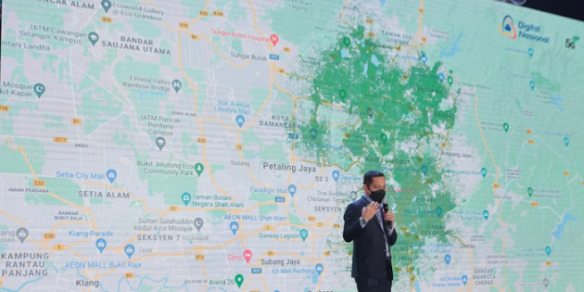