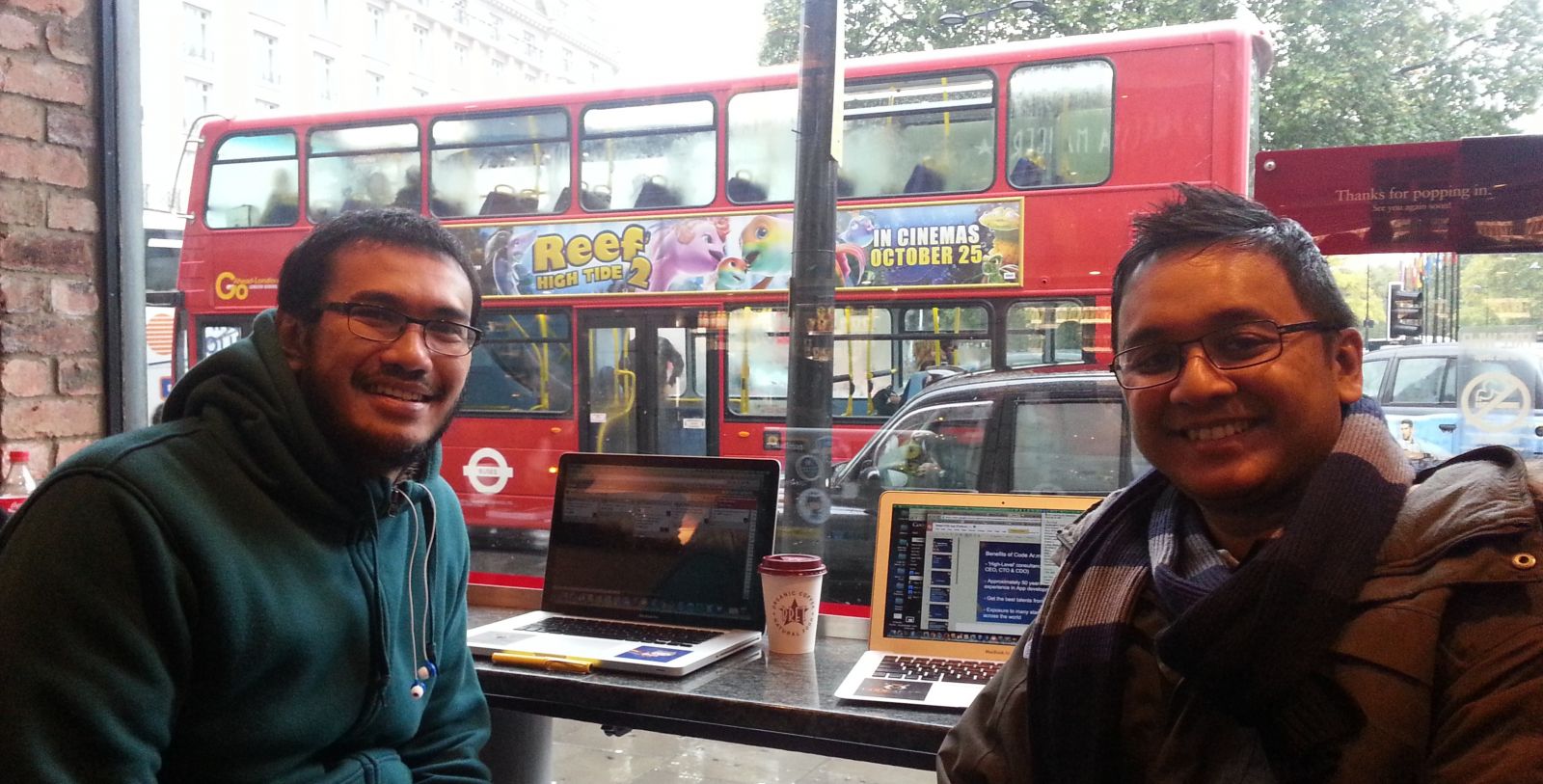 HOW tough is the startup journey? Tough enough that even 11 years of entrepreneurial experience under the belt does not guarantee that one will make all the right moves, or at least, avoid the major pitfalls.

This is the experience of Zafrul Noordin, cofounder of Code Army who says that he only found his niche in November 2013, more than two years after launch. Prior to that he was running a digital agency for seven years and had racked up a total of 11 years of entrepreneurial experience before launching CodeArmy.

In July 2012, Digital News Asia (DNA) had published a piece about Zafrul in the early days of his journey:

In his mid-30s and having run a digital agency (Motion Works Sdn Bhd) for the past eleven years, Zafrul is not your average fresh-faced Internet entrepreneur. He is applying sound business principles and logic he has acquired to the hustle and bustle speed-of-thought type thinking that exists in the Internet world, where ideas are global and competition is too.

However it was that very experience that worked against him, as Zafrul highlights a big weakness being the delay in seeking product validation and partly puts the reason down to how things worked in his previous business.

“Our background in IT and digital projects worked against us, as we were accustomed to getting the ‘user acceptance’ approved by clients, which meant months of development and testing before a release. This time around however, we were our own clients and were harder on ourselves – which delayed our own release,” he says.

Indeed, Code Army did not validate its idea in the market for almost nine months, seeking validation only after the platform was officially launched in March 2013. The idea was that it could use the principles of gamification to help solve the global talent crunch companies face. The platform was built to be the exchange where talents could be matched to companies seeking them.

It was a global problem to solve indeed, and every founder is advised to look for global problems to solve. What could be sexier?

Back in 2012, Zafrul had the wind in his tails with both national ICT custodian Multimedia Development Corporation (MDeC) and the Performance Management and Delivery Unit (Pemandu) of the Prime Minister's Department keen on supporting him and with an Entry Point Project (EPP) called “Kick-start the Gamification Industry” riding on his startup.

And yet, beyond the US$308,000 (RM1 million) raised from an angel and the US$246,000 (RM800,000) he put up of his own money, it has been a mighty struggle for Zafrul to build his platform, to then get traction and to raise further funding.
[Paragraph edited for clarity.]

He cites the lack of knowledge, exposure and experience as hampering his efforts to gain traction and building the right platform.

“As a startup, you are almost like a sniper. You have to really target your market and take aim. You need to find that someone to be your early adopter and use the product. We may have read many things on the Internet, but the actual application is a different story,” says Zafrul.

He adds that “as entrepreneurs, the fear that your product or service is not good enough is huge, that the market will spit it out after the first bite.”

To compensate, he says, entrepreneurs think that they've got to get it perfect and 100% complete before the world can see it. But this is a huge mistake.

While he prefers not to dwell on the tough times of the past, looking back he notes that they were actually “a classic example of what not to do” when launching a startup. Making the pivot, finding a niche

The company has since made a pivot and is now focused on helping non-technical founders match up with chief technology officers (CTOs). It has also dropped the use of gamification in the talent matching process.

The narrowing of scope came about as Zafrul realised that this was a major pain point for many startups themselves. And for the available top technical talents who are not tied up to any one company, “I found many of them were tired of helping others out for free.”

Code Army now helps founders get CTOs for one- to three-month structured engagements, which are conducted remotely for a £3,000 (RM16,500) fee, with the company taking a 15% to 20% cut as commission.

Zafrul claims that the company now has 70 CTOs on board, with all candidates vetted and holding at least 10 years of experience. He admits that the £3,000 fee may seem low by market standards but says that the candidates are mindful of that the fact that the core clientele are startups.

“The CTOs understand because it is for startups and they have agreed to work for the lower fee,” he adds. Incidentally, Zafrul’s own CTO is based in London.

Taking a cue from 500 Startups founder Dave McClure’s belief that startups need three types of people – the hustlers, the hackers and the designers – Code Army has also added design talents to its offerings as part of a package deal.

“Founders pay for this because they see value in such an engagement,” he says, adding that immediate target markets are Europe and the United States.

Zafrul credits the Lean Startup Model (LSM) with helping open his eyes. This happened when he and cofounder Riz Ainuddin attended a workshop by Tech Stars held at Google Campus, London, in October 2013.

The workshop was one of many events they attended during a two-month trip to Europe to better learn the market, improve their platform and promote Code Army.

Determined that other Malaysian startups do not end up wasting time, energy and resources as Code Army did, Zafrul is about to introduce the LSM methodology to Malaysia via a 48-hour workshop from May 23 to 25.

Another reason for bringing LSM to Kuala Lumpur was the realisation that most Malaysian entrepreneurs do not realise the importance of validating or asking the right questions early enough.

“I know this because when we go around talking to fellow Malaysian entrepreneurs, we find them taking the same route which we took earlier. We can see the 'fear' of launching their idea or even sharing it with other people.

“They rather have it locked up in the garage awaiting the 'lift-off' which could be months away. So the first time the market will 'meet the idea' will be after the six- to 12-month development period,” he says.

What happens next is that you can either get lucky and succeed or fail in a grand manner. “... The latter is the norm,” he notes.

Zafrul also meets many Malaysians who have an idea and wonder if it will work.

“We don’t know the answer either, which is why it's important to know the techniques on how to get this question answered by empirical evidence, not by gut feel or a hunch,” he says.

Describing LSM as a systematic process to go to market, Zafrul says the workshop will give participants hands-on experience in applying Lean principles in building products or services.

“We see LSM really kick-starting the adoption of Lean Startup principles with Malaysian startups, with the aim of increasing the chances of success and creating better startups. We also hope to see Lean Startup communities and meetups happen post the first LSM in Malaysia,” he adds.