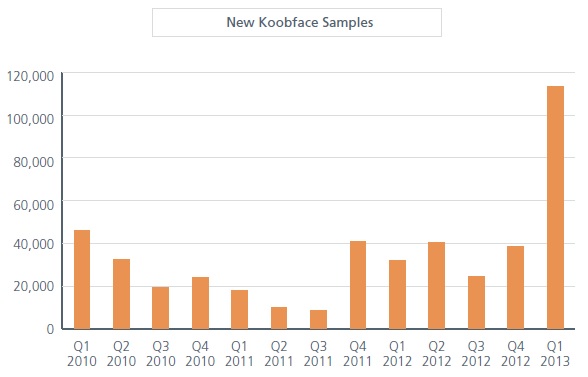 THERE has been a significant spike in instances of the Koobface social networking worm and a dramatic increase in spam, McAfee Labs said after releasing its McAfee Threats Report: First Quarter 2013.

In a statement, McAfee Labs said it also saw continued increases in the number and complexity of targeted threats, including information-gathering trojans and threats targeting systems’ master boot records (MBRs).

The cyber-security company found almost three times as many samples of Koobface (click to enlarge chart) as were seen in the previous quarter, which is a high point for the social networking worm that targets Facebook, Twitter and other social networking service users.

After three years of stagnation, spam email volume rose dramatically. One significant element behind this growth in North America was the return of ‘pump and dump’ spam campaigns, which targeted would-be investors hoping to capitalise on all-time equity market highs.

But the increase in the number and sophistication of targeted advanced persistent threats (APTs) represented the most notable evolution in the threat landscape, as information becomes as valuable as money on the cybercrime landscape.

The report found a 30% increase in MBR-related malware and new instances of password-stealing trojans being repurposed to capture information on individuals and organisations beyond the financial services industry.

“Cybercriminals have come to appreciate that sensitive personal and organisational information are the currency of their ‘hacker economy’,” said Vincent Weafer, senior vice president, McAfee Labs.

“The resurrection of Koobface reminds us that social networks continue to present a substantial opportunity for intercepting personal information.

“Within the enterprise, we see password-stealing trojans evolving to become information-gathering tools for cyber-espionage attacks. Whether they target login credentials or intellectual property and trade secrets, highly-targeted attacks are achieving new levels of sophistication,” he said.

Each quarter, the McAfee Labs team of more than 500 multidisciplinary researchers in 30 countries monitors the global threat landscape, identifying application vulnerabilities, analysing and correlating risks, and enabling instant remediation to protect enterprises and the public.