Review: Sony’s RX100 Mark VI is made for travel FOR the better part of six years, Sony has carved a niche out for itself in the premium compact camera segment. Its RX100 series has literally defined the market for photographers who demand superb photo and video quality but within a small compact body.

Fast forward to 2018 and Sony’s new RX100 Mark VI has entered the scene. Marketed as a high-end travel camera that can do it all, the Mark VI is a big departure from its predecessors.

But is this change a good thing or has it strayed too far from the RX100’s original vision?

It is hard to imagine that the RX100 series has existed for so long yet Sony has not changed the design by much at all. Call it lazy, call it classic. Whatever. The fact is, I was even able to use a leather carrying case meant for a Mark IV I on the Mark VI without any problem as it has the same size and dimension.

That said, the form factor is perfect for a casual camera you can bring around without the heft of a bulky DSLR camera. It weighs a featherweight 301g, slightly more than the Mark V, and fits perfectly in your pocket, making it great for snapping photos any time and anywhere. The biggest change on the Mark VI is that it has a very long 24-200mm focal range, that is roughly 8x optical zoom, which is very long compared to the Mark V’s 24-70mm. This squarely puts it within the sights of travel photographers who want one camera to do it all.

Now there is some trade-off with the extended range as the camera has a more variable aperture, the opening in the camera that lets light in, that goes from f/2.8 at the widest up to f/4.5 at the telephoto end. Honestly, it is not too bad if you are shooting on a bright sunny day, but it can pose a challenge in low light or indoor environments.

New this year, is a more versatile screen that not only tilts 180 degrees to the front for taking selfies but also allows you to tilt it 90 degrees, previously you could only go as far as 45 degrees This is great for taking top-down shots for foodies who want that great Instagram-worthy shot or taking a nice shot from above a tall vantage point. With smartphones becoming a de facto photography tool, adding a touchscreen display seems like the natural thing to do. The Mark VI benefits from having a pretty decent touchscreen you can tap to focus and shoot. Though this opens up a lot of flexibility, I found it strange that I couldn’t navigate the menus using the touch controls.

One of the mainstay features of the RX100 series is the pop-up viewfinder which is great for framing shots on a bright sunny day outside. This year’s version introduces a single action OLED pop-up viewfinder.

Let me explain. In previous generations, the viewfinder pops up and you would need a second action to pull out the viewfinder to activate it. Even closing it now is as simple as pushing it down to de-activate and turn off the camera. Revolutionary. That aside, not much else has changed with the camera. You still get a little pop-up flash on top that does a serviceable job lighting up a scene but at risk of “flattening” subjects.

Just as before, the ring wrapped around the lens can be used to adjust your settings or zoom on the fly. The controls on the back are identical and so are the micro USB and HDMI ports on the side.

Though this camera is just the perfect size for vlogging (that’s video blog for YouTubers) and real-world interviews, the main strike against it, is the lack of a dedicated microphone jack. This would have upped the sound quality that you can get with this camera instead of depending on the built-in microphones that pick every ambient sound up.

Taking the Mark VI out for some everyday shooting, I personally had mixed feelings using the camera.

On one hand, I really appreciated the extra zoom as it opened up more possibilities than my own trusty Mark V could. This was an advantage for me when I was capturing images or videos at events.

But as I used it more, I noticed that I missed the wider f/1.8 to the f/2.8 aperture on my Mark V. Shots were just not as bright and the aperture would get stuck at f/4.5 even after I went back to wide angle.

Now, the Mark VI has a really fast autofocus system that is amazingly at locking onto faces and even tracking moving subjects pretty accurately. This quicker focusing has to do with the fact that it inherits the algorithm from its bigger mirrorless cousin the Sony a9. It really came in handy whenever I was using it to photograph subjects at events or even my three-year-old son as he moved about. Even so, I found the focus to be slightly off at times though this could be in part due to the smaller aperture, especially when shooting indoors, which amplifies my shaky hands.

There are a variety of different modes to try including a Full Manual mode for photographers who want to take matters into their own hands. All the usual Program, Aperture and Shutter Priority are here too.

Photo quality wise, the results were just as good as the previous generation of cameras. The 1-inch image sensor, being bigger than your average compact camera sensor, captures a good amount of detail and colour. Take a good shot in daylight and you would be hard pressed to tell it apart from an image taken on a larger mirrorless camera.

Light sensitivity or ISO performance is respectable with usable images up to ISO3,200. Any higher will result in significant noise and softness to the image.

Aside from that, video quality is outstanding and is no different from the Mark VI. You get all the features including the useful SteadyShot for keeping videos from appearing like a fan remake of The Blair Witch Project. You can record up to 4K resolution video. The caveat is that you can only do so for five minutes. But the benefit is that this is some of the slickest and finest video quality outside of Sony’s highest-end cameras packed into a small body.

My main contention with the camera is its battery life. Understandably, in keeping the camera body so small it can only take a small battery. On average I was getting just barely over 200 shots on a single charge and it runs down quicker when recording video. This is strange as it is marketed as a travel camera but it really forces you to buy extra batteries.

On the bright side, the battery used by the Mark VI is the same as from previous generations so having owned some extras, I was in luck. 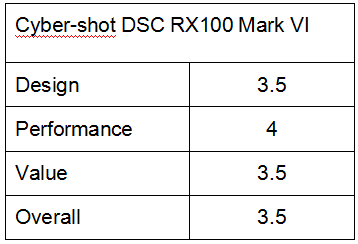 I have to say that the RX100 Mark VI really surprised me at just how versatile it is compared to the Mark V. The longer reach really aided me in day-to-day shooting and helped me grab shots I otherwise would never have gotten.

The added flexibility of the tilt screen opens a new world of options for snapping top-down food photos and the touchscreen makes framing and focusing on subjects so easy.

It is not just a great photo-taking camera either as I really enjoyed recording videos with the Mark VI, going as far as to use it exclusively for recording live events.

But here comes the bad news, as great as the zoom is, it just isn’t as good as the Mark V for low light photography. Also, the battery life is not terrific and won’t last you a full day of shooting if you take lots of photos.

Secondly, the Mark VI is a really expensive compact camera. At US$1,180 (RM4,899), you get what you pay for which is a high-end camera that snaps really good looking photos and videos.

Arguably, with that price, you could opt for a mid-range DSLR camera. Alternatively, if you are on a tighter budget and still want great image quality in a small body, there are the older but still excellent Mark IV or III versions and even the HX90V to consider.