Review: Samsung Tab A 10.5 an option for budget tablet shoppers TABLET technology has come a long way since I last owned one. The first tablet I owned was the first generation Google Nexus 7, which was introduced way back in 2012. Six years is a lifetime in technology terms and fast forward today, I’m reviewing the Samsung Galaxy Tab A 10.5-inch. Being a scaled down version of Samsung’s 10.5 tablet range, the specifications can’t be very high. The first thing to note is that it uses a 1920 x 1200 resolution LCD panel as opposed to the Tab S4’s 2560 x 1600 super AMOLED panel. The CPU is a Snapdragon 450 clocked at 1.8GHz, memory at 3GB and internal storage at 32GB. It does however support external memory.

It sports an 8MP rear camera and a 5MP front camera. The Tab A though supports LTE connection via a SIM card. The entire specs can be found here.

From a purely design perspective, the Tab A is well made. The bezels are thin, the thickest point of the unit comes in only at 8mm. It weighs about 550 grams, which isn’t too bad for a tablet. The feel is quite nice and I like the fact that the back has a matte, ‘rubberised’ aluminium feel, which makes it premium enough.

The SIM tray, volume and power keys are on the right side and there are four loudspeakers placed at the top and bottom corners, and four pins are on the left for connecting to the charging dock Samsung is selling as an accessory. The four speakers are a nice touch on the Tab A.

Though it isn’t a super AMOLED – which means the blacks aren’t as blacks as they can be – the display does perform as best it can being an LCD. The display is bright and crisp and does well under outdoor situations. Colours are well balanced and not too saturated. Reading at night can be a little tiring, unless the night mode on your app is on.

Overall, for a mid-range tablet, the Tab A isn’t too bad of a deal. Having a 7,300mAH battery is a boon for the Tab A. I easily got through the use of the tablet in a day without many issues. In fact on a single charge, it can last three to four days on light activity; two to three days on heavy usage.

Performance of the Tab A was also respectable. I didn’t experience any lag while doing the usual surfing, productivity activities with the Tab A. Being powered by a lower-end chip in the form of Snapdragon 450, some games played were a little sluggish. But games aren’t a big deal with me so I guess that’s something you should take note of, if this is your main criteria. Streaming video and offline video performance are also fine.

As for software, the Tab A runs Android 8.1 Oreo with Samsung Experience 9.5, but it doesn’t have most of the features you’d find on the Galaxy Tab S4 or any mid-range or flagship Galaxy smartphone such as supports or Dual Messenger. 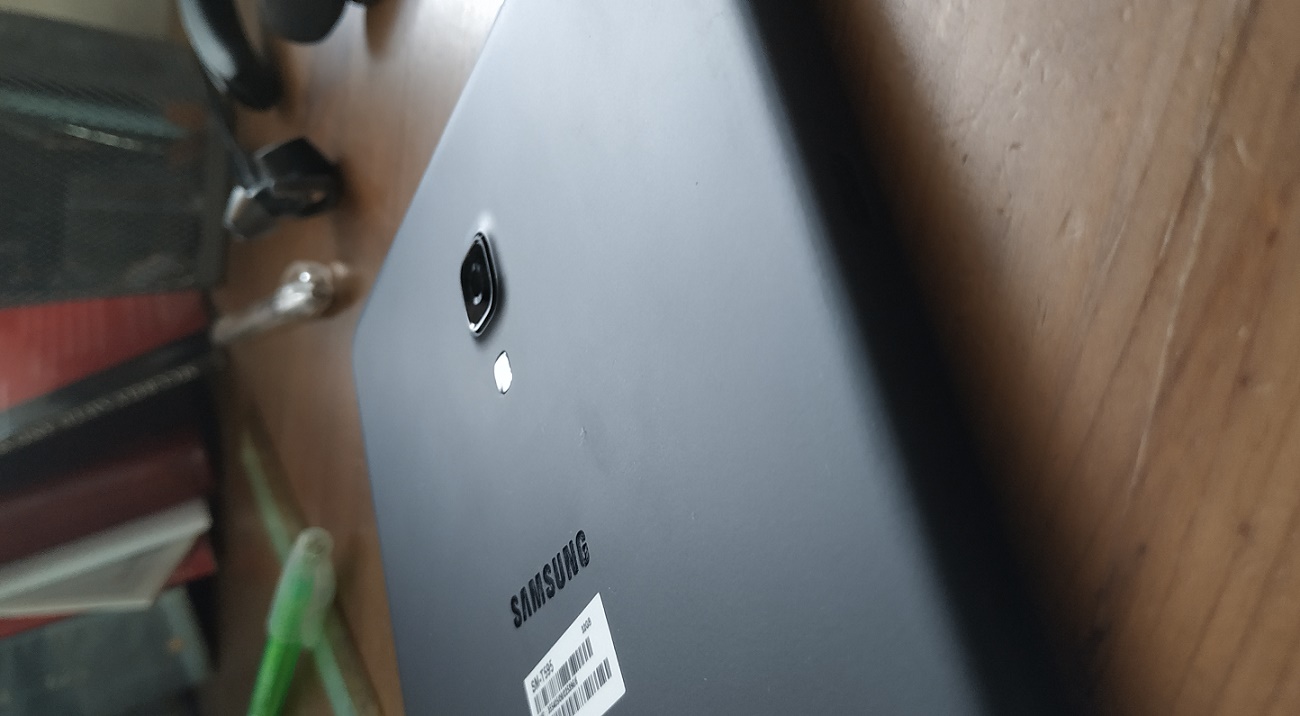 It does come equipped with basic features such as blue light filter, secure folder, and multi window, multitasking. It also comes with kids mode, where you can set up your child’s profile by entering the name, date of birth, and gender, then add some apps and games, emergency contacts, and images and videos that he/she can access. Kids Mode offers a few suggestions for children’s games and you can also set a daily usage limit.

As for the camera on a tablet, for me it isn’t a biggie as I don’t expect to whip out such a big device just to take a few shots. So the Tab A camera, I feel, is acceptable and functional at best. The pictures taken are decent, when there is good lighting. At night or in low-light situations, it isn’t that great. The front camera is worst off, and it shouldn’t be depended on for good selfies.

One of the reasons as to why I didn’t upgrade from my Nexus 7 is that I personally found that tablets aren’t for me. Between my 6-inch smartphone and my laptop, I felt I didn’t need something in between for my needs.

That said, there are some in the market who prefer a tablet while moving around and the prevalence of Apple’s iPad has also made the market more amenable to accepting a tablet, IMHO.

Thus, the Tab A is targeted squarely at those who want a device that does everything a smartphone does but with larger screen real estate. The Tab A isn’t a high-end device and those thinking of acquiring it should be mindful of this. It isn’t an inspiring device but at the same time has enough in its hardware and software arsenal to keep non-demanding users happy.

So is the Galaxy Tab A 10.5 worth buying? It depends. At RM1,699 and if you’re in the market for a relatively inexpensive Android-based tablet with a large and good screen, with good audio and for media consumption and a long battery life, the Tab A 10.5 may just be for you. The closest competitor isn’t in the Android world, as the iPad 9.7 is priced slightly higher.