Review: The Acer Predator Triton 500 is a beast in a slim frame COMPARED to the newly-launched Acer Predator Triton 900 – with its morphing, multi-functional form – the Predator Triton 500 appears relatively boring. It’s not breaking new ground in terms of design, and even by gaming laptop standards, one might say that it’s too conservative.

But its seemingly unimpressive look is one of the charms of the Triton 500, which currently positions itself as a notch below the high-end and excessively premium Triton 900.  It’s here to get the job done – to squeeze in powerful performances in a slimmer-than-most frame. By those values, the Triton 500 is superb.

What’s really important to emphasise here is the Triton 500’s size, which is its best feature. This 15.6-inch gaming laptop sits at a mere 17.9mm in thickness and weighs approximately 2kg, and is clearly aimed for portability, placing it along the likes of the Razer Blade 15 (but not quite as thin) or the MSI GS65 Stealth Thin (not quite as light).

I’ve lugged my fair share of gaming laptops around (and currently own one), so the Triton 500’s slim built and relative lightness was a boon to my shoulders, especially during long commutes. Plus it slides into most bags easily. Since it’s meant to be portable, it’s good to know that the Triton 500 feels solid and tough. Encased in black metal, it rightfully exudes a premium feel. The lid, however, feels a tad flimsy, but I suppose that’s expected for a gaming laptop given its slimness.

It’s also comparatively subdued in design. Sure, it has the Predator logo emblazoned on its lid and actually plays a revving, screeching sound when booting up (which doesn’t bother me, though it gets embarrassing at cafes), but the Triton 500 thankfully dials back down on the aggressiveness that is prevalent in gaming laptop designs.

I do very much like the blue accents that accompany the black, especially in the laptop backlight. You’ll also find traces of the blue surrounding the WASD and arrow keys on the keyboard. It’s simple and elegant.

You’ll find the usual collection of ports here, which include a HDMI slot, three USB 3.0 ports and jacks for headphones and microphones.

The keyboard works well – the keys register input nicely and I can hardly think of an instance where it failed me in responsiveness. The touchpad works well, too – you’ll hardly use it for gaming, but for working without a mouse, it’s responsive and precise enough.

It’s not a full keyboard setup though. To keep its more portable stature, the Triton 500 eschews the numpads. If I were to nitpick, I’d much prefer they use the space to enlarge the left CTRL key, which is often a vital key for most games (they opted for a larger right CTRL key instead, which feels rather baffling to me). 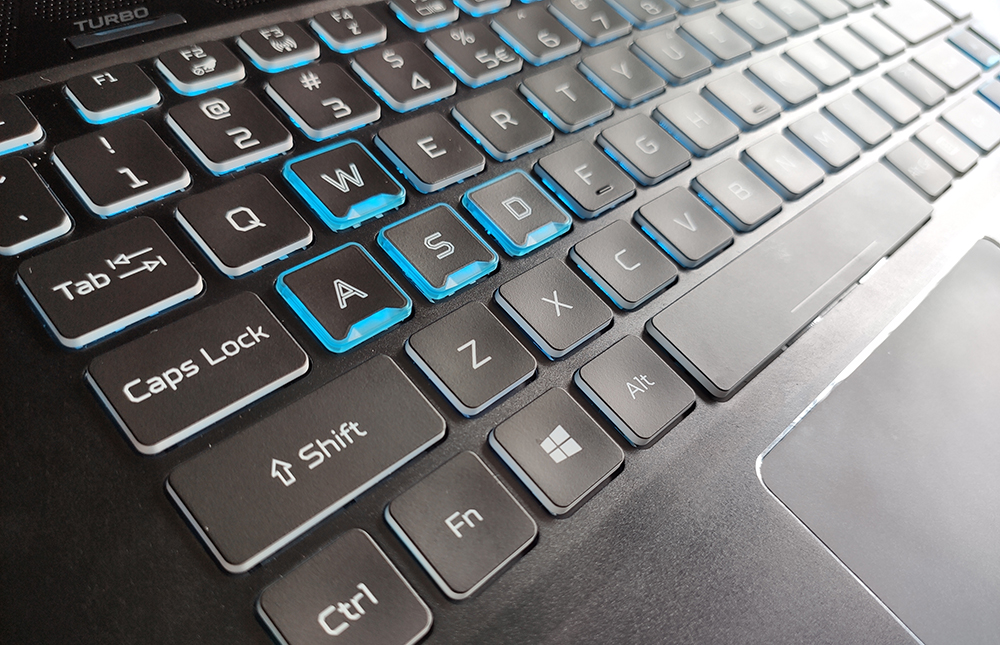 We have to note that the Predator Triton 500 comes in different specifications that you can purchase, which includes a version with an Intel Core i7-9750H processor coupled with an NVIDIA GeForce RTX 2070 GPU.

That’s the higher end of the spectrum. Our unit carries something a little more modest – this one is equipped with an Intel Core i5-9300H processor, 16GB of RAM, 512GB in SSD storage and an NVIDIA GeForce RTX 2060 GPU, all for RM6,999.

It’s still a powerhouse. I ran Rise of the Tomb Raider in Very High settings at 1920 x 1080 resolutions and observed an average of 85fps. Gameplay is silky smooth, further aided by the 144Hz display panel that Acer has opted over a slower 60Hz. The display works tremendously well in frenetic gameplay sequences, particularly when I tried it with Apex Legends.

This is a Full HD display though, which may bum out those hoping for a 4K option (or something higher, at 1440p perhaps). I typically find 1080p displays sufficient, but it would’ve been nice if Acer had included the option to upgrade for a better screen.

I’ll sing praises for its speakers as well. While I prefer gaming on headphones, the built-in speakers on the Triton 500 (which takes up a sizeable estate on the top of the keyboard) offers some sufficiently loud audio with stereo effects to boot. It’s nice to have, even if it’s not technically necessary for me.

Battery life on this laptop is expectedly poor. I say expectedly, because it’s unlikely that we’ll be playing through Metro Exodus without it being hooked up to a power source. Using it for a combination of work, surfing the internet, watching videos and squeezing in a few sessions of Enter the Gungeon here and there, the laptop flashes the low battery warning in two hours and 30 minutes.

The Acer Predator Triton 500 comes with few surprises, and certainly pales in comparison to the more unique (and significantly more expensive) Triton 900. But it’s still a beastly machine in a slim form factor that may very well deserve a look, if you’re in the market for a gaming laptop.