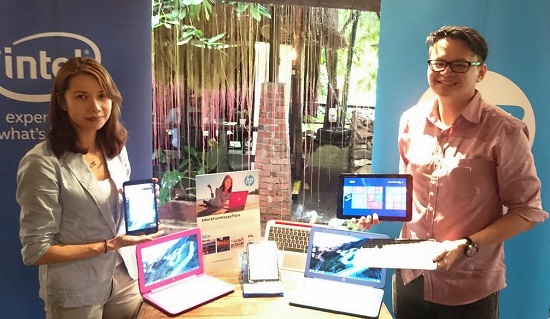 HP Malaysia is confident that its new range of ultraportables will be a hit among those who want more mobility without having to sacrifice productivity and power.

HP Malaysia has partnered with Intel Malaysia to launch several of these devices – which are not new to the market – for the #WorkFromHappyPlace campaign.

The two companies said the campaign was designed to help Malaysians “restore their work-life balance” by giving them the right devices so that they can work on the go.

Speaking to Digital News Asia (DNA) on the sidelines of the campaign launch, HP Malaysia’s market development manager for consumer notebooks James Low claimed that while there are many laptops and tablets in the market, these devices are competitively priced without having compromised on power.

“Take the HP Pavilion 10 x2 for example. It’s a fully functional ultraportable laptop with a 10-inch screen, a detachable dual-purpose keyboard/ cover that both protects the screen and serves as a multi-position stand, a USB and an HDMI port, a microSD card (64GB support) slot, and is powered by Microsoft Windows 8.1,” he declared.

“At the same time, it functions as a tablet as the screen can be detached from the keyboard – making it more versatile,” he added.

When asked what its other unique selling points were besides a detachable keyboard, which other vendors also produce, Low said that besides the split tablet-keyboard functionality, the Pavilion 10 x2 also has a slot for a mobile SIM card, which allows the users to use the device as a standalone PC connected to the Internet.

“There are similar devices at these price points in the market but many of them don’t have a 3G SIM slot, which would allow a user to access the Internet even when there is no WiFi connection,” he claimed.

Low said that the HP Pavilion 10 x2 is also powered by the latest-generation Intel energy-efficient Atom processor, that helps extends the battery life to between 11 and 12 hours of usage.

“It also comes with a one-year free subscription to Office 365 Personal,” he added.

Karen Chow, head of multinationals and telcos at Intel Malaysia and Singapore, said that users today are looking for mobility and enough computing power at the same time.

Asked why she believes these devices will do well in the market, Chow said, “The Intel-powered HP Pavilion 10 x2 and the HP Stream 8 are two examples of devices that can meet the productivity needs of most.

“What’s more is that they come in two different form factors and sport exciting colours, which I’m sure would attract a lot of users,” she added.

Pressed further as to why Intel Atom chips were used, Chow said Intel’s latest range of Atom chips are powerful enough for daily use and can easily handle multitasking for more productivity-concerned users.

“Chips such as the [Intel] i5 are only needed in cases where users need to run very power-hungry applications,” she told DNA. By all accounts, the HP Pavilion 10 x2 (pic above) is a well-built laptop. The front bezel of the screen also houses front-facing speakers, while the right side gives access to the power and volume buttons, HDMI, microSD and USB ports, as well as a micro-USB charging port.

The keyboard is also quite well built, and the pitch of the keys is not too shallow or deep. Typing is a breeze, although a full-size keyboard would be more comfortable for long daily use.

The removal and attachment of the keyboard to the tablet portion of the device is fairly easy to do and shouldn’t present many problems after the first few tries.

Combined together, the device weighs in at 1.14kg and isn’t too heavy to move around with.

Hardware-wise, the Pavilion 10 x2 has relatively good power. It comes equipped with 1.33GHz quad-core Intel Atom chip, 2GB of DDR3L memory and 32GB of storage space, which is expandable by another 64GB via the microSD card slot, while screen resolution is 1,280 x 800.

Featuring an 8-inch HD (1280x800 pixels) IPS display, the Stream 8 runs on Windows 8.1 and comes with a one-year subscription to Office 365 and one terabyte of Microsoft OneDrive storage for one year.

The HP Pavilion x2 and the HP Stream 8 and are available at RM1,377 and RM847 respectively.

Given the price range of these devices, the HP offerings look competitive at face value and should warrant a more serious look for those in the market for an ultraportable laptop replacement.

But whilst these devices have been positioned as mobile productivity tools, their specs seem a little short, especially in the memory and storage area, and might present problems to those using them as multitasking devices.

Granted, only a full review of such a unit will reveal if this is true or not.

Another point to note is that there are worthy competitors out there in the market from other vendors, so do check the other contenders out before committing.

Order your HP supplies via the SureSupply app