ACCORDING to IDC Indonesia’s Quarterly Mobile Phone Tracker, 6.5 million smartphones were shipped in Indonesia in the first quarter of 2016, reflecting a moderate 2.7% YoY (year-on-year) growth but declining 22.2% quarter-on-quarter.

The sequential decrease in Q1 2016 was higher than the same period last year when it also recorded a 2.7% increase YoY, the research firm said in a statement.

“Firstly, it was the relatively lower sell-out performance in Q4 2015 which resulted in a stock carry-over into Q1 2016.

“Secondly, the market also slowed down after the Chinese New Year period. Thus, shipments were slow in late February and early March,” he added.

Samsung was back in No 1 position in the Indonesia smartphone market, gaining 33% of the market share.

According to Reza, big promotional campaigns, cashback offers and telco bundling for Samsung’s J-series smartphones were the catalysts for growth.

China-based vendors continued to expand their share in the Indonesian market, rising to 23% in Q1 2016 from 21% in the previous quarter and 12% a year ago, largely at the expense of local vendors.

Oppo, which launched its flagship smartphone F1 in the quarter, was the winner amongst the China-based vendors. Its campaign was mostly focused on promoting this new model and retailers were also incentivised to receive attractive margins through selling the Oppo F1.

Lenovo, on the other hand, continued to establish a strong foothold by forming a partnership with six ‘etailers’ in Indonesia to sell its much awaited model Lenovo K4 Note that came bundled with VR (virtual reality) glasses, according to IDC Indonesia.

Online channels recorded a 40% YoY decrease, accounting for a 3.6% share of smartphone units in Q1 2016.

According to Reza, online channels still thrive on the introduction of new models, mostly through flash sales to generate hype. However, not many new smartphone models were launched through such channels in the first quarter.

There were 3.3 million 4G (Fourth Generation) smartphones shipped, accounting for 52% of smartphone shipment in Q1 2016 and surpassing 3G volume for the first time, coming mainly from the US$100-$150 range. 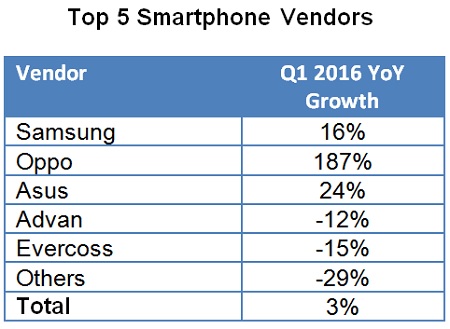 Not many new models were launched in Q1 2016 and vendors are expected to increase their shipments by launching new models and focusing on their bestselling models in the next quarter.

Historically, Q2 is a high season due to Ramadhan and Hari Raya, according to IDC Indonesia.

While the local content regulation (TKDN) towards 4G phones is still unchanged, more vendors are expected to follow the footsteps of those who initially complied with the regulation, the firm said.

“We have been seeing vendors such as Samsung and Lenovo take part in the development of DNA by conducting idea pitching roadshow in big cities in Indonesia. Thus,

“It is expected that more vendors will follow the steps of [Samsung and Lenovo] to promote smartphone local application development,” said Reza.

“Therefore, the growth of 4G smartphones will remain robust, with strong double-digit growth rates over the next few years,” he added.

Lastly, as individuals have increasingly gone mobile for business productivity, leveraging apps to access and transmit heavy corporate data, businesses must realise that the challenge and opportunity is getting bigger.

IDC said it believes that more and more enterprises in Indonesia will realise that to deliver true value from their mobility initiatives, they must mobilise their internal operations and customer interaction.