TODAY may be April Fool’s day but for one chief executive officer (CEO), the day is anything but for fooling around.

As was announced on February 12, Albern Murty, officially takes over the reins as CEO of one of the country’s oldest telecommunication companies – Digi.Com Bhd.

Previously the the chief operating officer (COO) of Digi, Albern succeeds Lars-Åke Norling, who moves over to become the CEO at Total Access Communication PCL (dtac), another Telenor affiliate based in Bangkok, Thailand.

What’s significant about this move is that Albern is the first Malaysian to helm the Telenor-owned telco player, a first for the company.

The appointment of Albern as CEO augurs well for the company. Firstly, it shows that despite its roots as a Scandinavian-led company, Digi is finally able to turn over its leadership to a local candidate, albeit only after 15 years of foreign leadership.

Secondly, it showed that the company has finally rewarded a loyal, veteran employee, who has over the years shown himself to be a capable executive, while grooming him to take over the leadership of a profitable telecommunication player listed on Bursa Malaysia.

The choice of Albern as CEO seems to be a good one. The 42-year-old executive has been with the company since 2002, and has worked within the company in various capacities, spanning project planning and control, product development and management, as well as sales and marketing.

For a time, he was also the head of strategy and new business, a posting that finally led him to the top job in sales and marketing as Digi’s chief marketing officer (CMO) in April of 2012. In January 2014, he ascended to the COO position.

Albern (pic) also has the unique distinction of having worked under all the five aforementioned CEOs, and would been mentored by different personalities and styles of management.

Having had the chance myself to interview all but Norling, I can testify to this very fact.

For example, Johnsen was an engineer-turned-CEO and he had a very consensus-building type personality and came across more like a father figure-like executive. Lundal, by contrast, was very much more business-like, and was perceived as a no-nonsense doer and go-getter type of executive.

I’m sure much would have been learnt under their respective tutelage.

I’ve personally known Albern for a dozen or so years. I first met him during an interview when he was in charge of Digi’s rollout of EDGE (Enhance Data rates for GSM Evolution) data technology.

Prior to joining Digi, Albern worked for the American telco vendor, Lucent Technologies Inc, a divestiture of the former AT&T Technologies’ business unit of AT&T Corporation, which included Western Electric and Bell Labs. The company later merged with French telco giant Alcatel SA, and is now known as Alcatel-Lucent.

My first impression of Albern was that he was an affable and ambitious young executive, ready to roll up his sleeves and work hard towards his goals, which he once told me amongst others, was to one day helm a telco operator.

I remember him to be knowledgeable, able to articulate himself well and he exuded confidence and had just about enough 'salesmanship' needed as a company spokesperson and a telco executive.

Digi had a lot riding on the EDGE project back then. The design and rollout of EDGE technology for Digi was key to its go-to-market strategy at a time when it was desperate to challenge its rivals – the bigger and stronger Celcom Axiata Bhd and Maxis Bhd.

At that time, the latter two operators had won the licence to build a third generation (3G) network in 2003 whereas Digi had chosen to stay out of the 3G bidding process.

But despite winning the licence to rollout 3G, Maxis and Celcom took their time doing so due to the complexity and the associated costs of building such a new network. Digi knew this and sought to capitalise on the situation by going to market first with EDGE.

3G utilises a different frequency spectrum, wireless technology and handsets while EDGE upgrades were a much easier prospect given that the technology was closer to second generation 2G (GSM) technology than it was to 3G.

Albern was the key person tasked at that time to ensure that EDGE would eventually give Digi the edge (no pun intended) in capturing the then burgeoning mobile data market approximately two years ahead of what its competitors could bring to the market with 3G.

If my memory serves me right, Digi was largely successful with the design and rollout of EDGE. Through its aggressive marketing campaign, the telco did make headway in the then nascent mobile market and cemented itself as a serious player in the market despite not having a licence to operate 3G.

This was what I remember as one of the earliest triumphs for Albern as he sought to prove that he had the chops to make it big in the telco business. Throughout the years at Digi, Albern has shown himself to be a pretty diverse executive having taken up various roles within the company. Later, when Digi finally acquired its 3G spectrum – albeit indirectly via the purchase of Time dotCom Bhd’s 3G assets and not via direct bidding – the company continued to innovate, often coming up with marketing campaigns as well as products and services that the market liked.

Last year, the company was even shortlisted in Forbes World’s Most Innovative Companies 2014 list.

Progressively, Digi found further footing in the market, especially the prepaid segment, and became a true upstart to the bigger players, Maxis and Celcom.

In fact, in its most recent filing with Bursa, Digi showed itself to be the only one of the three big mobile operators still to grow its revenue for the full year ended 2014, compared with Celcom and Maxis, which had failed to do so.

But as Albern slips into the CEO role, several significant challenges await him. Granted most of which he’s already used to tackling, there are some new curves he would need to manage as the CEO.

From a technological standpoint, there are quite a few developments in the industry he would have to handle.

New technologies such as software-defined networks (SDN), Voice over LTE (VoLTE) – a form of enhanced packetised voice – network functions virtualisation (NFV), and enhancing customer analytics; and even future technology like fifth generation (5G) are but a few that need to be worked out.

And I don’t mean so much the technical implementation but rather how all these new technologies are ultimately going to increase customer loyalty, reduce churn, increase average revenue per user (ARPU), stem declining SMS and voice revenues, and manage return on investments for Digi.

Then there is an issue of tackling the changing market dynamics in Malaysia. Subscribers today are becoming more demanding and requiring operators such as Digi, and rivals Maxis and Celcom, to merely go beyond offering good coverage and basic services.

There are many value added apps and services, which operators need to manage, in order to differentiate themselves from one another.

Closely related to this issue is how to manage the growing invasion of Internet players, which are continuously riding off the network bandwidth while not having to pay for the costs of building such networks. There’s no stopping these players and so cutting intricate partnership deals with these giants will be key going forward.

For example, Facebook-owned instant messaging app WhatsApp has launched its calling feature for Android smartphones (iOS to follow soon), which would in time gain traction and disrupt Digi's and other operators' traditional voice revenues.

Yet another challenge has to do with skillset retention and manpower requirements. In today’s globalised environment, skilled workers are hard to find, and even harder to keep.

Such a challenge includes the issue of ensuring that Digi’s staff are cross-trained amidst growing demand for workers in the telco business to be multi-disciplined, be they an engineer, a marketing or a customer service executive.

Last but not the least, effectively managing vendors, which is becoming increasingly tough as more and more vendors promise the sky but can't deliver in reality. 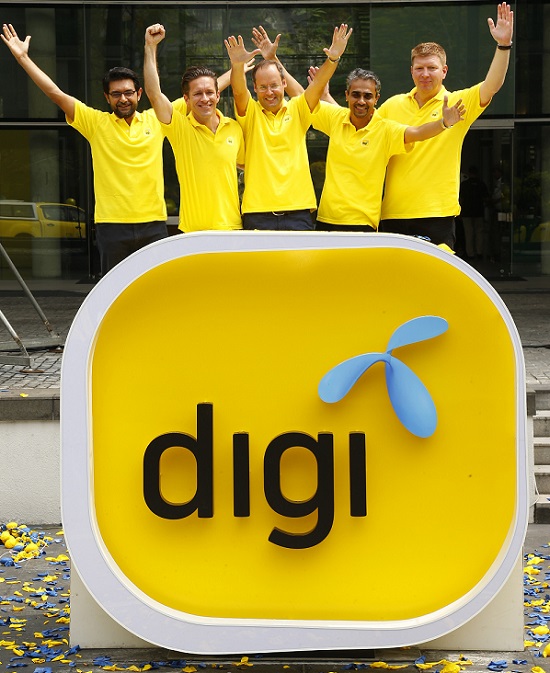 But by far the greatest challenge for Albern and Digi remains the thorny issue of frequency spectrum allocation or the lack thereof.

For years, the smallest mobile operator by spectrum allocation has argued that it is disadvantaged by the fact that it does not own a significant portion of the 900MHz spectrum, which Maxis and Celcom do.

The industry regulator, the Malaysian Communications and Multimedia Commission (MCMC), has been toying with the idea of re-farming the 900MHz and 1800MHz bands for some time now.

This means that exiting spectrum could be redistributed amongst the mobile operators, thereby giving a chance to those who do not own the bands to bid for them.

In a report by The Edge Financial Daily last September, Norling acknowledged that Digi had been meeting the industry regulator, on this matter. He also conceded that Digi needs the “spectrum for driving mobile Internet and hoped that that there will be a structured refarming process.”

“We’ve had a positive dialogue with MCMC and [then chairman] Mohamed Sharil Tarmizi and I think he is open to [hearing] the industry’s views on this. He definitely [wants to understand] the future needs for [the] spectrum,” Norling had said.

However, Sharil’s tenure as chairman of MCMC abruptly ended last year, and the MCMC is now under the helm of a career bureaucrat in Halim Shafie.

Put simply, the issue of spectrum re-framing remains in limbo.

The right to use 900MHz is acutely important for Digi as it is the only operator today that does not own vast quantities of the lower 900MHz frequency band that is needed for wider coverage. Digi currently only has a measly 4MHz of the 900MHz band, while Celcom and Maxis has 32MHz and 34MHz respectively.

Gaining the 900MHz band would also help Digi to offload some of its 3G traffic from its current 1800MHz band to the 900MHz band thereby enabling Digi to provide Long Term Evolution (LTE) on its 1800MHz spectrum, something its rivals Celcom and Maxis are able to do.

This issue remains one of the company's greatest Archiles heel as it struggles to squeeze more subscribers into its network. So it remains to be seen what will happen here.

Add to this the day-to-day headaches of running a growing mobile network, Albern will have his work cut out for him from today onwards. He will have to be at the top of his game to manage this next transition in a bid to ensure that Digi achieve long-term survival.

Still, I can’t think of a better and more experienced candidate, who is already steeped in Digi’s Telenor-derived culture, to take the company forward.

So here’s wishing him and his team all the best in his endeavour to take Digi to the next level.