IT’S that time of the year again as Digital News Asia (DNA) looks back on the favourite stories written for the year, and as I did so personally, I’ve come up with the following five, arranged topically.

The world has been talking about digital transformation for a number of years already. Numerous surveys and one industry panel have been conducted, and all of them point to one thing – there is a need to embrace digitalisation but not all do.

Many enterprises either fall into one or more of the following categories: Those that aren’t prepared to do so; those who don’t know how to; those who are slow in doing so; and those who are not strategic about doing so.

The last of these is what a regional bank chief information officer (CIO) spoke about, which is the title of this story. In last year’s Red Hat Summit in Boston, David Gledhill (pic, above), also DBS’ head of group technology and operations, said that as a bank, it had no choice but to use technology to drive change within the bank.

“We have to build technology as good as what the best technology company on the planet has,” he stressed. “You have to do that in a radical way and not just put ‘digital lipstick’ on the bank.

“As we thought about this transformational shift in the culture, we started by looking at how the best tech companies – Google, Amazon, Netflix, Apple, LinkedIn, Facebook – operate, and asked ourselves, ‘How do we become like them?’,” he said.

As large as it is, Gledhill said it needed to embrace digital holistically or risk being overtaken by banking rivals and even non-financial competitors.

“As part of our journey of how we shifted ourselves from [being] a traditional bank to being a technology or software company, one of the key questions for us was, 'How to set free our developers and businesses, so that they can design new creative products and not shackle them to the traditional ways of doing things?

If there was one piece of advice smaller enterprises should follow, it would be what Gledhill advised. 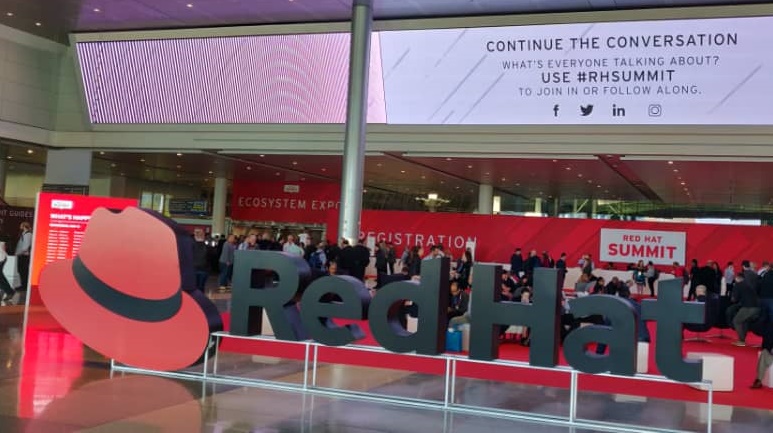 Speaking about last year’s Red Hat Summit, the open source company reassured businesses and developers that its acquisition by computing giant IBM Corp will not fundamentally change how it operates but instead would give it a leg-up in the enterprise hybrid cloud computing space.

IBM CEO Ginny Rometty had earlier explained that the acquisition of Red Hat was a "game-changer" as it changes everything about the cloud market.

“IBM would become the world’s No 1 hybrid cloud provider, offering companies the only open cloud solution that will unlock the full value of the cloud for their businesses.”

There were initial fears as to how the acquisition was going to affect how developers worked with Red Hat but these executives at the conference spent time allaying these fears. Part of their strategy was to drum up its vision of the hybrid cloud, something that Paul Cormier, Red Hat’s executive vice president and president of products and technologies did consistently throughout the conference, as did Red Hat’s CEO Jim Whitehurst.

“I think everyone recognises that some cloud providers are going to be better in some services compared to others in [alternative] services,” Cormier said. “Customers are [still] going to have applications running on premise – some in virtual machines while others in containers – and they’ll want to access all of that.

Red Hat certainly has their work cut out for them, as noted by a couple of analysts in the story. Gartner argued that at Red Hat’s revenue is, understandably, still heavily influenced by its operating systems business and may struggle to ramp this up.

And Wikibon noted that the chasing pack of aggressive public cloud providers – AWS, Microsoft and Google Cloud, all of whom are already addressing hybrid deployment scenarios in their solution and partnering strategies – which may serve to challenge Red Hat.

Time will tell what happens at this year’s conference, where we won’t be seeing Rometty as CEO anymore as she’s been recently replaced by long timer IBMer, Arvind Krishna. No story for 2019 will be complete without mentioning the term “5G.” At the start of 2019, the government, via its industry regulator, The Malaysian Communications and Multimedia Commission, made a big fuss about the dawn of a new age for the country, and declared Malaysia as one of the first nations in the world to embrace this new technology.

Showcases, launched no doubt by the Prime Minister, were put on by operators, interviews conducted with key players and press releases about collaboration amongst players inked were aplenty.

But after this flurry of activities, the MCMC still has not yet come out with a definitive announcement on how the most important resource for 5G to come into being – frequency spectrum allocation – is going to take place. At most, the government indicated at a recent ra-ra 5G event that it expects 5G prospective players to accept its idea of allocating spectrum to a single consortium.

Yet fundamental to the question of how 5G can be a success given all its benefits is the question of trust, or the lack thereof, argued GSM Association (GSMA) director-general Mats Granryd at last year’s Mobile World Congress Asia in Shanghai, which is the focus of this story.

The head of the GSMA said there needs to be a concerted effort to foster better trust amongst all stakeholders and that the industry needs to build a better future by demonstrating leadership in security and trust issues, if 5G is to take off properly in Asia.

“We must all avoid becoming like the man who trusts nobody, which is the kind of man nobody trusts,” he said.

Granryd further argued that trust issues had to do with collaboration on security best practices, cooperation between buyers and suppliers as trusted business partners, and the need to embed security into the culture of every stakeholder within the supply chain and in every aspect – “from product design to decommissioning.”

Trust certainly is a major issue because 5G isn’t just about a communication technology anymore – it can be turned into a global arms race, as I’ve written about this before. From 5G, we dovetail nicely into Industry 4.0 (IR 4.0). In this story, industry representatives, including the Deputy Minister of the Ministry of International Trade and Industry (Miti) Ong Kian Ming, urged small- and medium-sized enterprises not to shy away from IR 4.0 but instead embrace it wholeheartedly.

That said, SMEs can’t be totally blamed for being wary of IR 4.0, as there is so much confusion over what it is in the first place.

“We believe the industry is not so much reluctant [to adopt Industry 4.0] as it is ignorant [don’t know how to do so], and so it’s our aim to give them the knowledge to do so, depending on their needs,” said Raja Teagarajan, the president of the Malaysian Industry 4.0 Association.

To this end, deputy minister Ong noted that from the government perspective, the term ‘The Fourth Industrial Revolution’ differs from the term ‘Industry 4.0.’

The former describes a larger, overarching trend that encompasses all industries, while the latter is a more specific term that refers to the fourth industrial revolution efforts undertaken particularly in the manufacturing sector.

“As far as the government is concerned, the fourth industrial revolution affects every single ministry and sector. For example, in the agricultural sector, people are using drones to capture topological information and embedding sensors in the ground to mine for information; in the healthcare sector, there are devices to capture data to improve diagnosis.”

Ong said to help SMEs move towards Industry 4.0, Miti has rolled out a Readiness Assessment Framework, where three government bodies – Sirim, Mimos and MARI (Malaysia Automotive Robotics and IoT Institute) – will assess how ready SMEs are to undertake these efforts.

Once again, the ball is on the SMEs’ court but it remains to be seen if they will get moving on IR 4.0. The last story on my list involves a topic that cuts through all previous four stories: Cyber-security, and how a new approach is needed.

Through my exclusive interview with one of the world’s leading cyber-security experts, Rik Ferguson (pic, above), we learn that there are three areas that enterprises must look into: Business oriented machine learning; orchestrating security architecture; and autonomous response and machine learning.

“Ask yourself how you can leverage on machine learning as a technology within your business to make cyber-security more manageable,” he said of business-oriented machine learning.

As for orchestrating security architecture, he said, ““I think there are an average of 52 different products and interfaces in use in an SOC environment, which is unmanageable.

"Companies would need to either look for a technology or a suite of products that is designed to work with each other or look at a layer which you can build over the technologies and which allows you to orchestrate those tools as one."

Finally, he said of autonomous response, “If you don’t allow your machine learning to do that triage for you, to respond autonomously to those events that need to be looked into, and then only surface the rest to your human operators for root cause analysis, you’re never going to get ahead of the mountain of data.”

Enterprises take note –  because in cyber-security, it’s not a matter of whether you’ll be breached but when.