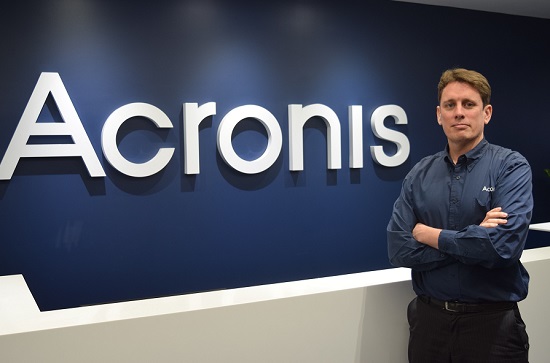 DATA protection specialist Acronis continued its ‘cloud-first’ transition with the announcement of version 3 of its Backup as a Service (BaaS) solution, and also the ‘full-blown’ availability of the service in Malaysia.

Acronis BaaS was first rolled out last year, and while as a cloud service it was essentially already available to customers here, the company has recruited a domestic partner which can offer it in-country, WerX Technologies Sdn Bhd.

“The product was here before, but WerX has actually set up its own storage here as well, so it’s totally in-country,” said Jason Frisch (pic above), Acronis Asia Pacific cloud director.

WerX is a full subsidiary of ServerWare Sdn Bhd, whose core business is to provide cloud backup and restoration services to businesses via local service providers, value-added resellers (VARs) and system integrators.

Giving service providers multi-layered options of how to sell the service was an important part of the design, Frisch told Digital News Asia (DNA) at a recent partner event in Subang Jaya. This also comes at a time when the cloud model has undergone a shift, he added.

“Previously, telcos wanted to do everything themselves. Everything was white-labelled,” he said.

However, telcos and other types of service providers have begun to realise that to do so, they had to be prepared to do all the support and even the marketing.

“You always had to stand in the middle, ready for anything,” said Frisch. “But everyone now is moving to what we call ‘the best of the best’ proposition, which is to get the best suppliers with the best technologies, and to support all that as a service provider.”

Clients still get one invoice, but the solutions providers take care of the backend stuff, he explained.

In the ‘old days’ of just a few years ago, these offerings would be branded as the service provider’s offering, with the solution provider being largely invisible to the end customer. But even that has begun to change.

Meanwhile, Acronis Backup-as-a-Service is a multi-tier/ multi-tenant solution that provides local and hybrid storage of backed up data, local backup on customers’ premises, and local recovery plus recovery from the cloud.

“Acronis BaaS not only enhances opportunities for service providers and resellers, but via our channel partner programme, it also brings a new stream of revenue without any entry cost to channel partners,” he said in a statement issued by Acronis.

Version 3 is another milestone in the ongoing transition of Acronis into a full-blown cloud company. While it has been providing cloud backup since 2010, in 2013 the company took the decision to convert all its solutions from on-premises to the cloud.

That 2013 decision also marked the start of its ‘cloud-first’ strategy, Frisch told DNA.

“But it’s what you do with the front end. Some of the features from the on-premises product have not been ported over to the cloud version yet, but the next major release next month will support things like Exchange, MS SQL, Active Directory, application backup, and granular backup of your email.

“That’s all already on our core product, but we don’t have it on the front end yet,” he admitted.

So when is everything going to be on the cloud?

“I would say within the next six months. It will actually be interesting because from the second quarter of this year, we will begin to have features that aren’t on our core product, like backup for Azure and Office 365, for example.

The service is hardware-agnostic, and runs on any platform or operating system, but for Frisch, one main selling point is the flexible deployment model and the easy-to-use management console.

“We have a very diverse set of customers in Asia – some have good broadband infrastructure, some don’t. Some want their data stored in-country, some don’t.

“We allow for that by having multiple data centres around the world, but we also allow our service providers to set up their own storage so that they can set it in multiple locations and offer that to their customers.

“And if broadband is not up to speed, you can have local backups as well,” he said.

Often, in countries where the broadband isn’t so good, customers would take a full system backup locally, so in cases of complete server failure they can restore their systems very quickly – but they will keep their critical data in the cloud.

“It may take a little longer to get back their critical data, but it’s okay as long as it’s safe,” Frisch said. As a privately held company, Acronis keeps its numbers close to its chest. The company, originally founded in Singapore, is Swiss-headquartered but last year ‘returned home’ by setting up its international headquarters in the island-republic.

It claims annual licensing revenue of hundreds of million dollars, has more than 650 employees worldwide (330 of them engineers), 30,000 partners in 90 countries, more than 300,000 businesses (including Fortune 500 companies) and five million consumers in 154 countries as customers.

It sold more than three million licences in 2014, but its cloud business grew by 10 times in 2014 over 2013, said founder and chief executive officer Serguei Beloussov (pic).

“In fact, we’re a very Asian company. We’re more Asian than just about any other company of our size. We have about 30% of our business currently coming from Asia,” he said.

“We have good business in Malaysia too, which we do through partners,” he added. Its customers here include big names like Star Publications, Tesco, Parkson and Malaysia Airports.

Acronis believes there is a potential US$1-billion market opportunity for the company’s BaaS offering in Malaysia.

“In fact, our business almost doubled in Malaysia last year,” said Beloussov, although he admitted that it’s not as big as in countries like Japan, Singapore and South Korea.

“But the IT market in Malaysia is bigger than in Singapore, so I believe we have the opportunity to grow our business here by about five to 10 times,” he added.

And the cloud-first strategy is going to be key to this.

“When people think about the cloud, they always think of it as something that is cheap,” said Beloussov.

“But it’s not about it being cheap – it is about the fact that as IT becomes a very important part of our lives, it becomes very comprehensive, it consists of many different components … and so the only way to be good in IT is to have a complete offer.

“But doing it inhouse has become more and more complicated, especially if you talk about smaller businesses, so making data backup easy is only possible in the form of a cloud service.

“And we believe it’s very good business for our partners,” he added.

He also believes that data backup makes more sense as a cloud service than as on-premises solution, for a number of reasons.

“One is that it’s easier to manage software, another is that you don’t have to manage storage – because when you do backup as a service, storage is managed by your service provider,” he said.

One problem with traditional on-premises backup is that a relatively small number of workloads is protected.

“Sure, in large businesses, most of the data will be protected, but as you go down the market to smaller businesses, fewer and fewer workloads are protected,” said Beloussov.

“This is because it is complicated. One of the main advantages of backup as a service is that it makes it plausible to protect every workload because it is very simple: All you need to do is to point to a device that needs to be protected, and it installs an agent, and that device is protected.

“You don’t need to manage storage, you don’t need to worry about versions of the software or configurations – and that opens a huge opportunity in Malaysia for family, micro and small businesses, and even large enterprises.

“We have a very modest goal: We just want to be No 1 in Malaysia for backup as a service and disaster recovery as a service, and we want to have a majority market share for protecting those workloads, working with our partners.

“We believe that eventually, every piece of data needs to be protected – because there is no reason not to protect it, and it’s very easy to protect it. We’re very well-positioned to do it,” he added.

Next: The strange case of Serguei Beloussov