Singaporeans most emotionally dependant on the Internet: Study

AS many as 78% of Singaporeans feel a negative emotion when they are without Internet access, according to the Tata Communications’ Connected World II report.

Also, 43% of Singaporeans actively use the Internet for over six hours every day – the second highest percentage after India.

However, despite Singapore’s dependence on all things digital, nearly one-quarter of those surveyed do not understand where the Internet resides, Tata Communications said in a statement.

The company conducted an online survey that comprised 14 closed questions, aimed at capturing behavioural, technical and philosophical responses in relation to people’s associations, understanding and emotional connections to the Internet.

The findings of this survey were then analysed as an aggregate of the responses and further based on age, gender and location to arrive at the insights, Tata Communications said.

The impact of the Internet on global economies has been phenomenal, the company said.

A third of the world’s population is now connected to the Internet according to Internet World Stats, and by 2020, the number of connected devices is expected to rise to 26 billion according to research firm Gartner.

With so many of us checking in online each day, it may come as a surprise to learn that the public still does not really understand just how the Internet works, Tata Communications said.

Only half of all global respondents accurately identified where the Internet resides (i.e. in network connected data centres), while 82% did not know that the fastest mode of Internet delivery to their device is through subsea cables.

In fact, 74% of surveyed Singapore citizens did not know the fastest mode of Internet delivery.

“The survey results also found that 77% of global respondents believe the most beneficial impact of the Internet is its ability to connect people globally with incredible speed,” said Julie Woods-Moss, chief marketing officer and chief executive officer of Tata Communications’ Nextgen Business.

“This belief has been the guiding force of our business strategy in the past, and is the essence on which we have built our networks to support the present and the future.

“Over 24% of the world’s Internet routes use our network, and this affords us a rare advantage and a perspective that helps connect with our customers globally across emerging markets and developed economies,” she said.

While nearly a third of the world’s Internet users are spending six hours or more per day actively using the Internet, Singapore’s reliance is much greater.

At 52%, Singaporeans rank high on FOMO (fear of missing out) when they are without an Internet connection. Overall, 78% percent of Singapore respondents state that not having Internet access sparks negative emotions versus 64% of global respondents.

In addition, Asian respondents appear to be the most ‘Internet-dependent,’ with less than half of Singaporeans and Indians capable of lasting up to 12 hours without Internet access compared with 86% of German, 77% of French, 75% of US and 70% of UK respondents.

Respondents from Asia and those from the United States and Europe are distinctly different in their vision of the most ‘inspirational opportunity’ that the Internet will deliver in the future.

Thirty-two percent of surveyed Singaporeans and 27% of surveyed Indians identified ‘smart cities’ as their preferred choice for what the Internet will enable in the future.

Respondents from the United Kingdom, France, Germany and the United States, meanwhile, picked ‘light speed connectivity’ as their preferred choice for the most inspirational opportunity for change in the next three to five years that the Internet will facilitate (click infographic to view in full).

Other highlights from Singapore include:

The complete global report can be found here. For those interested in how the Internet actually works, click on the video below:

Malaysians digitally connected; Malaysia not so much 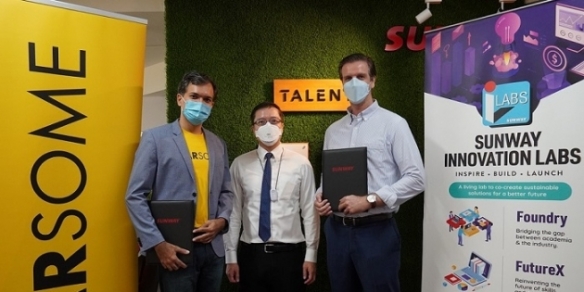