ADRIAN Vanzyl, chairman of Bangkok-based fulfillment startup aCommerce, has a message for traditional retailers: “You will never build another Amazon in South-East Asia if you do not compete within the next 12 months, in this market grab that is going on.”

The market grab he is referring to is the battle to win the hearts and minds – and wallets – of consumers in South-East Asia. It is currently being fought out between a few players, but with the Rocket Internet-powered Lazada seen by Vanzyl as having a “massive opportunity” to be the dominant player.

“Lazada came in early and massively overinvested, but as a result, it is now the undisputed No 1 player in the region,” he says.

Saying that its fulfillment platform is being used by all the major e-commerce players in South-East Asia, Vanzyl claims that aCommerce has better insight on anything happening in the e-commerce space in the region than anyone else.

aCommerce was launched in July 2013 by Ardent Capital, an early stage venture fund that itself was founded in January 2012 by Thai-American brothers Paul Srivorakul, John Srivorakul and Tom Srivorakul, as well as Piers Bennett. Vanzyl joined in June 2012 as cofounder of the fund.

aCommerce was a natural move as they had a clear understanding of how big a pain point fulfillment was across the South-East Asian countries they operated in when running their own e-commerce startup Ensogo, which was later sold to US-based flash sales site Living Social in July 2011 for an undisclosed amount.

Later, LivingSocial sold its South-East Asian assets – including the Thai-based Ensogo – to Malaysia’s iBuy Group, which rebranded itself to Ensogo to take advantage of the latter’s brand recognition.

‘A world of hurt’ While Lazada races to build its dominance in the region, unencumbered by the worry of profitability in this early stage of the region’s e-commerce growth, it is this very early stage that gives incumbent retailers a window to still jump into the game.

Vanzyl estimates that with e-commerce constituting 1% of total retail purchases in the region, but expected to hit “roughly 10% in five years’ time,” the window for traditional retailers to “participate and be a serious player in the e-commerce space is only in the next 12 months.”

The jump from 1% to 10% is massive and translates to billions of US dollars in retail moving from the physical to digital world. The startups that are in this space now will be enjoying rapid month-on-month growth, and have the opportunity to build valuable companies and brands, he predicts.

“The incumbent retailers are going to be in a world of hurt unless they get their act together,” he cautions, predicting that they will “never catch up if they miss the 12-month window.”

Is Vanzyl exaggerating the window that traditional retailers have in which to get into the e-commerce game?

Such retailers have spent decades in the retail space and have strong domain knowledge, deep supply chain relationships, access to credit and customer information. Does this count for nothing?

You can ask Vanzyl these questions yourself as he will be speaking at the What’s Next conference.

He will also be sharing his insights on consumers in Malaysia, Thailand and Indonesia, specifically within the generation categories, and their interest or lack of, in e-commerce. Don’t miss it, especially if you are a traditional retailer.

The What’s Next: The Business Impact of Disruptive Technology conference (#WhatsNextDNA) will take place on Tuesday, Sept 29, from 9am-5:30pm at the Cyberview Resort & Spa. Tickets will cost RM980, with a group rate of RM730 (for three or more). To book your tickets, go here. 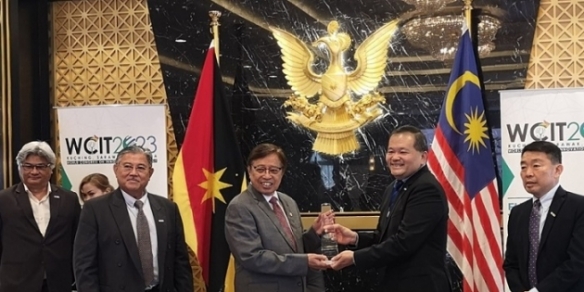