BLACKBERRY Ltd, the struggling Canadian handset maker that once dominated the enterprise market has done what it arguably should have a long time ago: release an Android-powered device.

Well, better late than never. When it was first announced back in late September that it would adopt the Android operating system for its latest smartphone instead of its very own BlackBerry 10 platform, the market was curious on what it would bring to the table.

Now that the BlackBerry Priv has launched in Singapore last week and in Malaysia on Dec 7, and having used the device for about a week, we can confidently say that the company has become relevant again.

Going by reports of the device being sold out, it seems many other people feel the same, including the reviewers. Which is good news for BlackBerry, since this will be the last handset it will sell if it doesn’t make a profit (or shift 5 million smartphones) by the end of fiscal year 2017, according to company CEO John Chen.

The Priv brings enough differentiation to an increasingly commoditised Android hardware market, and would be able to attract those who need a solid productivity tool, as well as access all the apps, games and services found in the Android ecosystem. “If you go late to a party, you want to make a big entrance, so we didn’t hold back on the hardware in terms of implementation, we put everything we could into the device,” he added. Tay pointed out that the Priv utilises a 5.4-inch curved glass display sourced from Samsung, giving it a nice rounded edge on the sides. Sliding your finger from the edge will bring up a ‘productivity tab’ which provides you with information from your calendar, tasks and favourite contacts (pic below). The AMOLED screen is visibly a high-end component protected by Corning’s Gorilla Glass 4. Sporting a widescreen Quad HD (2560 x 1440) resolution and 540 pixels per inch, it is sharp, bright and simply  lovely to look at, especially when we zoomed in on high resolution photographs or played high quality videos.

The downside of such a high-resolution display is the additional toll it takes on battery life. Thankfully, BlackBerry included a relatively large 3410 mAh battery, which the company claims would provide up to 22.5 straight hours of typical usage. During our limited time with it, it didn’t last quite as long, especially after we spent time playing games, downloading and installing apps, answering e-mails, taking notes and just generally keeping the screen turned on with some activity or other. The good news is, in spite of this intense usage, the phone stayed powered till the later part of the evening.

What makes the BlackBerry Priv stand out however, is not so much the display but what’s beneath it. Slide up the screen, and the 4-row physical keyboard underneath is revealed. We deem this to be an achievement since the thickness of the device, at 9.4mm, hides the fact that there is a keyboard to be found anywhere. Some may say that the physical keyboard is a relic from a bygone era and meant for BlackBerry diehards who don’t wish to adapt to on-screen typing. To a large degree this is true, and even BlackBerry executives we spoke to, admit that many of today’s younger smartphone users probably don’t have any experience with physical keyboards. Virtual keyboards have become the norm and easier to use. In fact, the Priv itself comes with both the physical keyboard and a very decent soft keyboard (pic below), although you can also replace that with any of the keyboard apps you can find on Google Play (like Google’s very own keyboard app, which is one of our favourites). 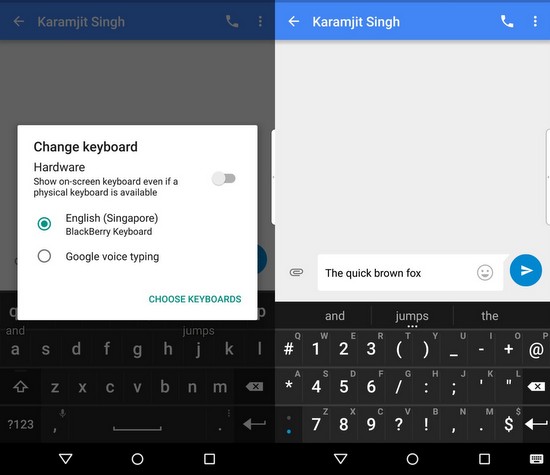 Tay, however believes that once users start experiencing the physical keyboard, they can get hooked. “You don’t know what you’re missing until you’ve used it,” he said.

“A lot of work went into the usability, like the weight, and what we did with the capacitive keyboard for example,” Tay said, noting that the device is well-balanced and not top-heavy despite the long form factor when the keyboard is out.

BlackBerry ported over the capacitive keyboard which Tay referred to, from the company’s previous device, the Passport. This gives you the ability to use it like a touchpad, so rather than swiping on the display itself (as most of us would usually do), you can gesture across the keys to navigate around the desktop, scroll web pages or your Facebook newsfeed. You can even select the predicted words that show up as you type, simply by swiping upwards.

Typing on the keyboard was comfortable, although it didn’t feel as good as the BlackBerry Classic keyboard. It’s flat and feels mushy, and on many occasions, we actually reverted to BlackBerry’s on-screen keyboard instead.

Still, it’s far better than anything produced by any other vendor, going back the last few years, but wait – that’s because it has been that long since anyone else manufactured a slider device. That market seemed to have dried up ages ago. Which begs the question – is the physical keyboard all that necessary? For a lot of us, probably not – but this is BlackBerry after all, and this is what the company is known for – creating killer keyboards. If you’re the type of user who still can’t get used to on-screen typing, or would rather go back to the days of feeling that satisfying click as your thumbs hit the keys, then this is the device for you. The other highlight about the Priv which BlackBerry has focused on are the security and privacy aspects about the device.

Android and security aren’t usually said under the same breath, considering the kind of mobile malware and exploits this operating system has faced and is still currently struggling with.

However, BlackBerry has made a significant number of tweaks to the operating system (in the thousands, apparently) to improve the security of the software. Additionally it also created ways to secure the hardware at the manufacturing level.

We were disappointed at the absence of a fingerprint reader which helps to conveniently unlock the device, but we suspect this is already specced in for a future model down the line.

Tay said BlackBerry will also be more active in releasing software patches and fixes in order to address bugs and potential exploits, and promised more frequent software updates – something which he pointed out, not all vendors actually do.

The company has also included an app called DTEK (pic below) which rates your device in terms of how secure it is, and guides you towards improving the security rating. Through the app, you can also check on all your other apps to see how they could potentially be accessing your information, but this feature will probably be superseded by Android 6.0 Marshmallow when that comes around.

Yes, unfortunately BlackBerry Priv runs on Android 5.1 Lollipop rather than the latest Android flavour, which is a missed opportunity. Since we’re on the topic of software, don’t expect to see too many apps on board. Aside from DTEK, BlackBerry-related apps (like BBM or BlackBerry Hub)  and Google’s suite of apps, you’re pretty much on your own to download the rest of your apps from the Google Play store, including a voice recorder and a file manager, both of which are not preloaded. You will, however, find a ton of shortcuts for different functionalities. There is a serious amount of shortcuts on this phone (pic above). Oh, and by the way, all 26 letters on the physical keyboard can also be customised with a shortcut.

Software and unique features aside, how does the BlackBerry Priv perform as an Android smartphone?

Inside, the device is powered by Qualcomm’s Snapdragon 808 processor, which puts this pretty much at the top of the range in terms of pure horsepower. Similar to the LG G4, the 808 performs admirably when it comes to loading apps, loading game levels, browsing with multiple tabs and running a dozen apps at a time.

Paired with 3GB of RAM and 32GB of storage (with support for external microSD cards), the Priv has more than enough going for it in the grunt department. The only bugbear here is that, like Qualcomm’s other high-end processor, the 810, it would tend to heat up a fair bit when playing games or installing and downloading apps. But thanks to its back plastic shell covered with what it calls a ‘glass weave’ anti-slip material, the heat is muted and it doesn’t get  uncomfortably to hold. As for the 18 megapixel rear camera (featuring a Sony image sensor and a Schneider Kreuznach lens), we were happy with the quality of the images, even though the autofocus would sometimes take slightly longer to lock on and the shutter lag is evident in low-light situations.

On the upside, there is a dual LED flash and optical image stabilisation on board to help deliver decent photos in dark environments.

Some examples are found below: The front camera however, comes with only 2 megapixels, and the quality of the image is more suited for Skype calls rather than selfies. 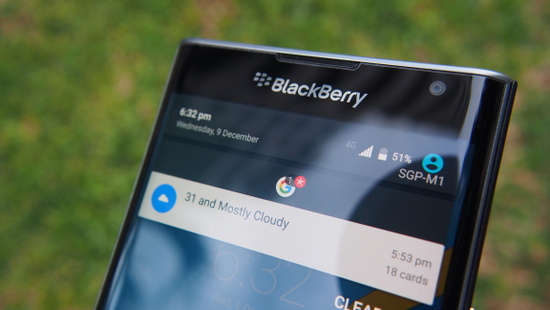 In terms of audio quality, the front-facing speaker delivers decent sound for conference calls and just passable for music. There aren’t any option for equalisers when listening to music either, so you’d probably have to rely on a good pair of headphones instead.

Even though everything about this device points towards it being targeted at business users, Tay said the Priv is really targeted at all Android smartphone users, since it comes with a ‘no compromise’ offering.

Unfortunately the compromises are there, such as the lack of a fingerprint reader, found on many other smartphone flagships, as well as the weak front camera.

Still, some buyers may be willing to overlook them in order to have a physical keyboard and device with improved security - or perhaps the sharp AMOLED display will win them over.

Based on its premium price point, this device isn’t going to sell by the truckloads compared to low and medium priced smartphones. But what’s key for the team is margins, rather than market share gains.

Tay said, “We’ve cut quite a lot of cost from the device business but clearly we want to be profitable, so that’s one, but we’re just launching it and from all the reactions we’ve received from partners, it has been good. The price obviously is in the high end, but we need to be profitable.” The BlackBerry Priv is available for pre-order from today in Malaysia at RM3,388 inclusive of GST, but from Dec 15, the price will revert to RM3,559.

In Singapore, the device is priced at S$1098 and will be available through operators M1, Singtel and Starhub as well as BlackBerry authorised partners.