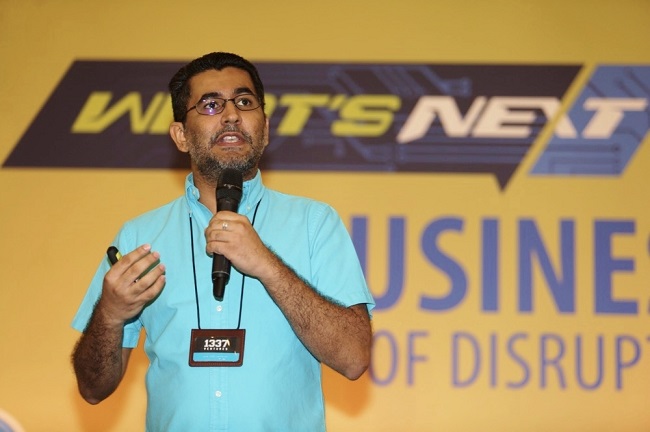 INSTEAD of worrying about startups disrupting traditional industries and large corporations, the question now should be: Why not work together?

1337 Ventures founder and chief executive officer Bikesh Lakhmichand (pic above) said such collaboration could be very valuable, as long as both parties play their cards right.

If you want to create a programme to cooperate with startups, he advised large corporates, the secret is to pay attention to the building blocks: What your programme design looks like; ensuring there are measurable outputs; and assuring there will be implementation.

In designing such a collaborative programme, you need to be very specific and start on a small scale, he said, arguing that most corporates want to go big on their first journey, which can instead be a big mistake.

“We see a lot of companies wanting to jump in to invest in 15 companies or acquire 20 companies – they go too big and create a big fund, without taking the baby steps to try and work with startups first,” he said at Digital News Asia’s What’s Next 2016 conference in Kuala Lumpur yesterday (July 28).

According to Bikesh, one of the first things large companies should do before embarking on a startup collaboration process is determine what they want to achieve – whether it is to diversify, expand, or innovate.

He said that he found that in his more than 10 years’ experience training companies and entrepreneurs via his other company, iTrain (M) Sdn Bhd, the most difficult part in working with large companies was their inefficiency and bureaucracy – sometimes it could take up to three months to sign a simple deal.

“What more if you want to start a pilot programme with startups – can you imagine the amount of paperwork you need to go through?” he said, adding that large companies should not let too much bureaucracy drag them down when dealing with startups or starting an investment programme.

Bikesh also noted that despite having separate innovation centres, many large companies still need to go back to the head office or parent company to approve any initiative – this defeats the purpose of having an innovation centre in the first place.

Indeed, he argued that creating such an innovation centre was not even necessary if the company could build a cross-departmental team that understands the importance of business and innovation.

If you like it, put a price on it

Many startups these days want to work with large and established companies, and the reverse is also true.

This means startups have options. If they are not attracted to any deal, they can walk away much more easily and quickly, Bikesh cautioned.

Bikesh argued that startups would value the company based on how the company valued them. And with money on the table, it would be a lot easier to start the innovation and collaboration process. He also shared nine ways on how traditional companies could have a successful collaboration with startups.