However, except perhaps in the case of really large organisations, inhouse teams may find it tough to generate a constant and regular stream of content that can engage their customers, so increasingly, these tasks are being outsourced to dedicated consultants.

We summarise some of their findings below: 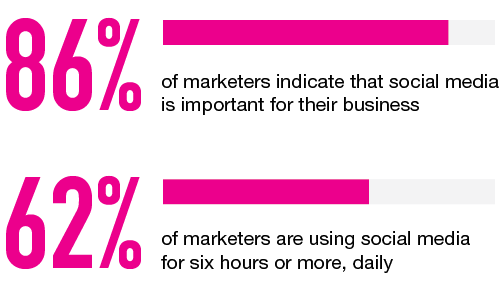 Although these facts and figures were primarily culled from a US-based survey of companies and marketers, they speak of a trend that will also eventually become true here in Asia, if it hasn’t already: Social media is now part of the enterprise space, and companies that do not embrace it are jeopardising their business.

Despite the reality that social media is essential in today’s business environment, not many companies are being strategic about it, even in the developed world. According to a recent Harvard Business Review article, companies still aren't sure what to do with social media.

A survey sponsored by analytics firm SAS Institute entitled The New Conversation: Taking Social Media from Talk to Action, found that much of the investment in social media is “future-oriented.”

“Although 79% of the 2,100 companies surveyed are either using or planning to use social media channels, a measly 12% of those firms feel that they are using them effectively.

“These social media all-stars engage beyond the tired method of ‘shout marketing’, by using social media more often to promote their brand, monitor trends among customers, and even research new product ideas,” the report read.

So what should companies do?

First and foremost, enterprises should realise that social media is about communication – the communication of a company’s strategic and corporate goals, objectives and marketing messages, rather than just a ‘webpage’ for curious readers to check in to now and then.

The first thing you’ll need to do is to come up with a coherent strategy. Ernst & Young (E&Y) suggests that for many companies, creating rigorous social media strategies is necessary to ensure consistent customer experiences, reliable content creation, data governance and regulatory compliance.

Social media strategies would be different for different companies. They can vary depending on whether these companies are in the B2B or B2C space; the industry they’re in (heavily versus lightly regulated); and a variety of corporate culture factors (risk-averse versus risk-taking), the consultant firm said in its Social media strategy, policy and governance report.

There are however some basic steps in social media strategy development that tend to be universal: Many of today’s chief executive officers (CEOs) were born between the 1950s and 1970s. As a result, they are not digital natives like those born in the 1980s, and are generally less social media savvy, although there are exceptions such as Tony Fernandes of AirAsia fame.

So how should one start getting into social media?

Sridharan Nair, managing partner of PwC Malaysia, candidly admitted that it wasn’t easy for him to get on social media but he was committed to making it work and that required a mental change and a New Year’s resolution.

“Today, Twitter helps me connect with our Gen-Y people and our potential recruits, and learn about what’s important to them. I also get a feel of the pulse of the market and environment we’re working in,” he said after getting into Twitter in January, 2013.

Getting into social media may be hard for many C-level executives, and would require a mind-set or cultural change. In today’s highly connected world, they must see social media not as a passing fad but rather as a tool to project themselves (and their organisations) on the Internet and to connect with their customers.

Even with this, the next step for these C-levels is to start understanding the various applications of social media and how they can be used to achieve business benefits – it is only then that they can start using this medium effectively, according to PwC. The consultancy firm also recommends that the relevant departments have open conversations with their top bosses.

This means that marketing and digital teams within a company should start educating their CEOs and C-level leaders on how social media fits into the business strategy; why it can be a vehicle to differentiate themselves; and why they risk becoming irrelevant if they don’t start doing something in this space.

“Lastly, as with anything new in life, make the leap. For the forward-thinking business leader, embrace this method of communicating: Twitter, Facebook, LinkedIn and more,” PwC says.

“Drop the notion that social media is for ‘fun’, or is the playground of the Gen-Ys only. After all, aren’t a large number of the consumers out there Gen-Y anyway?”

Next month: Monitoring and measuring returns, and the dos and don’ts of social media