NOW, serious photographers should look away. This article isn’t for you, simply because you’re too advanced for it.

The Olympus OM-D E-M10 Mark II (okay, that’s quite a mouthful there) is designed for photo enthusiasts who want to step up quality, and are just moving into the entry-level DSLR (digital single-lens reflex) segment.

At S$1,148 (single-lens), one will not have to dig deep into one’s pockets to own a camera with such a pleasing design.

The E-M10 Mark II may seem intimidating at first, with all the adjustment dials and buttons, but it is really not that bad.

With its metal and faux leather touches, and despite its many controls, the E-M10 Mark II has an appealing retro feel. Because of its small grip, it might be better suited for smaller hands. The light weight of 390g also seems to support that. The front ridge and thumb grip offers a relatively comfortable grip. In a throwback to cameras of yonder years, the E-M10 Mark II has a power switch that is even more retro. Pushing it beyond ‘on’ pops up the flash, and this also incorporates a hotshoe for mounting flashguns.

Next to this is one of three programmable function buttons. This particular one can be set to the Simulated Optical-Viewfinder (S-OVF) function. It supports the 2.36 million dot OLED electronic viewfinder that shows the actual exposure and other camera settings.

Turning the S-OVF on allows it to mimic the electronic viewfinder’s capabilities, and in dark scenes and backlit photography, improves visibility of the intended scene. This is better than using the 3.2in LCD display (pic above) with 1.04 million-dot resolution, which tilts up to 90 degrees and angles down to about 45 degrees, to frame the scene, as such eye-level viewfinders are not affected by bright sunlight and reflections.

Users who are used to using point-and-shoot cameras, which usually have only LCD displays, will find using the viewfinder awkward at first, like looking through a tunnel. But really, after a while, one will find it so much more conducive and effective. On the right side of the camera are a number of dials (pic above) that, for new users, need a little figuring out.

There is a mode dial, which switches between manual, semi-manual, automatic, movie, Photo Story (which creates a photo collage automatically) and effects mode. When in movie mode, the LCD touchscreen is activated, and operations like zooming and exposure can be controlled.

The two adjacent adjustment dials can be programmed to control functions like exposure and aperture.

The movie-record and function buttons are just on the right. The function button can be pre-set as a multifunction control, and it adjusts functions like colour to control hue and saturation. 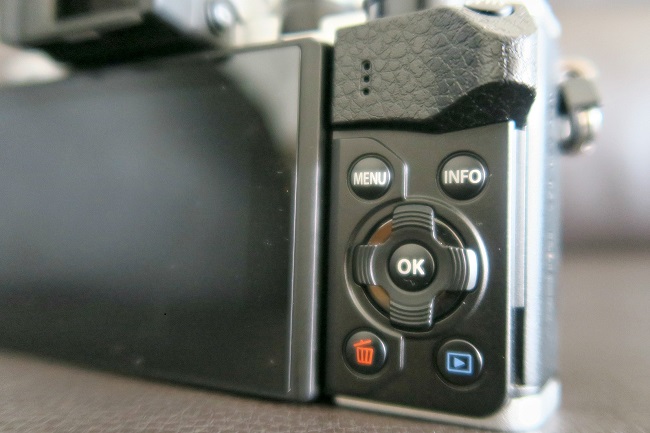 We do like the thumb grip, which is suitably placed and rather comfortable. Just below is another programmable function button, and a navigational pad with the usual menu, info, delete and review buttons.

Generally, all the buttons and dials are well-placed with a good tactile feel. They are functional, yet also add to the near retro feel of the camera.

No wonder our day out with this camera turned heads.

A bit of focus on the 16.1-megapixel camera’s design, but really, we think that is what will grab most people’s immediate attention.

Looks aside, the E-M10 Mark II’s performance is rather decent. It has a fast focus system, which focuses and shoots in about 0.2 to 0.3 seconds, in good and low light conditions respectively.

It is able to sustain a burst rate of 8.5 frames per second, which produces good focused shots. This is quite sufficient for capturing fast moving shots. Powered by a BLS-50 Lithium ion battery pack with a 1210mAH capacity, the battery life is capable of delivering 320 shots when fully charged. Couple still image photo captures with movie taking, and the battery clearly delivers what it promises.

Some of the features we like include the AF Track Pad with touchscreen AF point selection, which allows one to reposition the auto focus area by gliding the finger on the LCD screen while setting up the shot through the viewfinder.

Okay, it sounds like a huge coordination task, but it’s actually not that bad. One soon gets the hang of it.

Onscreen shooting information is quite comprehensive, with a histogram, a dual axis levelling gauge and alignment grids being called up using the ‘info’ button.

The ‘OK’ button also calls up different usable on-screen menu systems, depending on which shooting mode is activated. The ART and SCN modes call up the menus for selecting various effects and scenes.

In the PASM modes, the menu practically takes over the screen with various options such as ISO and AF Track Pad in a grid that can be controlled by touch and the pad.

Other useful features include in-camera HDR, time-lapse and focus bracketing.

WiFi connectivity seems to be the in thing now, but we’re still quite old school – we still prefer transferring photos by the physical memory card. That’s probably why we like the E-M10 Mark II’s retro feel.

However, our gripe is that the E-M10 Mark II’s LCD screen doesn’t flip around for selfies. Really, in this selfie-crazy age?

Overall, the E-M10 Mark II’s photo quality is decent, and satisfactory for users like us who are not looking for top-notch professional quality.

Images are good around the range of ISO 800, and that, we find, is quite sufficient to deliver neutral colours with good saturation. Now this is useful, especially in low-light conditions. One can slow down the shutter speed to take photos, and with the stabilisation system enabled, the camera can be held on to without the shakes.

In terms of shooting modes, the E-M10 Mark II has the iAuto, ART, SCN and Photo Story options, on top of the traditional PASM modes.

This means that lots of creativity can be employed. One can experiment with exposure variables offered by the PASM modes – let the camera select the optimum shutter speed and aperture, determine depth of field by adjusting aperture, work with different shutter speeds, or be totally in charge of deciding the exposure for each scene.

Not in the mood to experiment? Then just leave it in auto mode.

Or one can play with the options offered by ART and SCN options. We had lots of fun with the 14 different filters on our day out.

There’s also the ART Bracketing mode which allows one to take photos with all the effects, or a pre-selected few. In terms of pre-programmed scenes, there are 25 different ones once the dial is turned to SCN. Most scene presets are satisfactory.

Our gripe is with the Panorama preset. The preset on the E-M10 Mark II doesn’t really take panoramas. Instead, it assists the users to take panorama shots by displaying guides to line up each frame.

The resulting panorama still needs to be put together using a different software. This is quite inconvenient, and we wish Olympus can move this in-camera.

The Photo Story mode (pic below) is basically a collage function that arranges between two and five photos onto a single image. Various frame layouts can be chosen, as well as the border style and filters.

Once these are determined, the mode allows one to compose each image carefully in turn before moving on to taking the same image. At the same time, the E-M10 Mark II will put them together in a single image. With its price and looks, the Olympus OM-D E-M10 Mark II makes for a compelling choice, especially for photographers who like to fiddle.

Still, it is a more logical purchase than investing on a really cheap DSLR – one gets a camera with the looks and some really decent camera features.