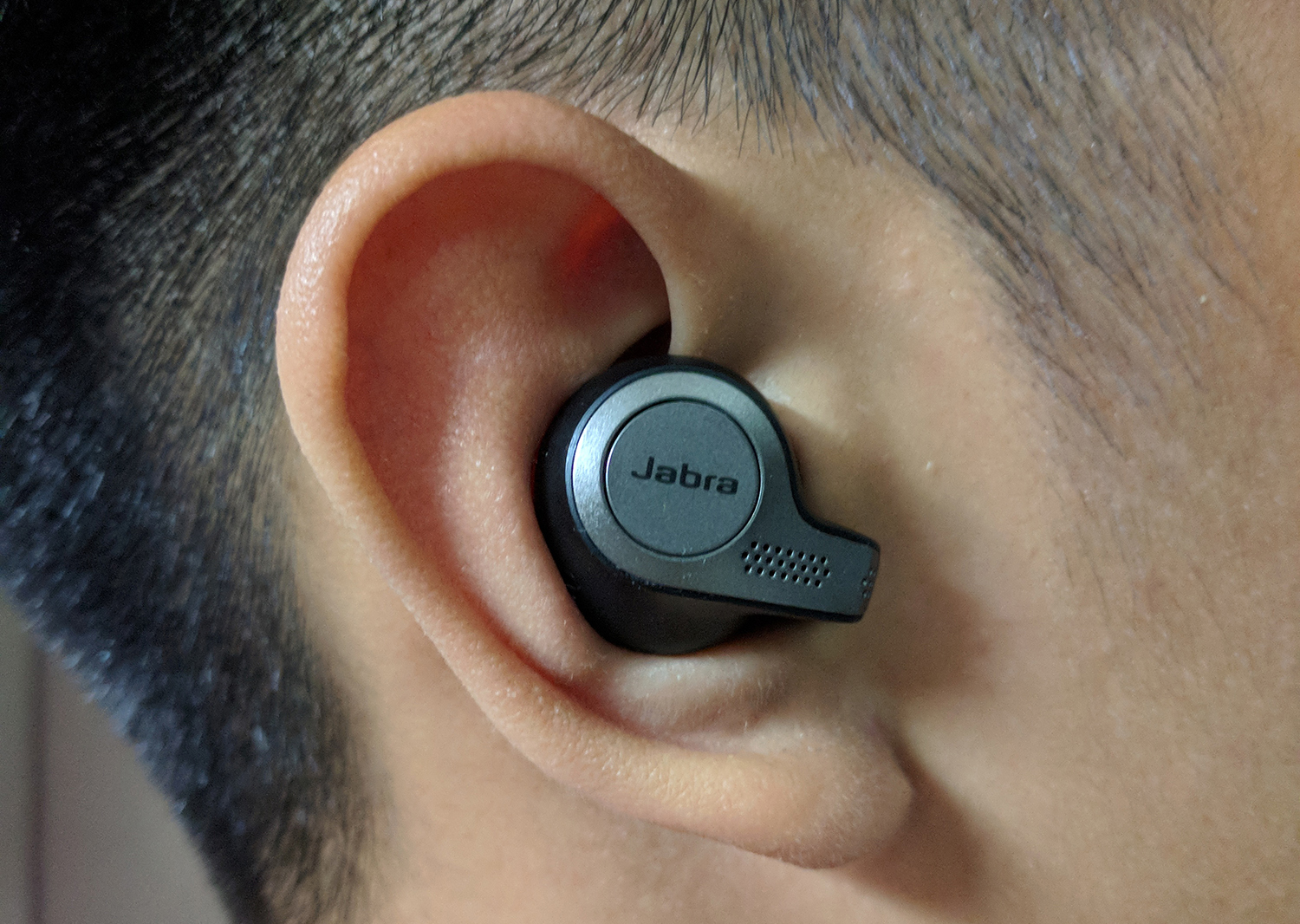 I LAST did a review on the Jabra Elite Sport last year and came away feeling only somewhat satisfied with the unit. It’s nine months later now, and practically, this is a long time in technology terms. This time the Copenhagen, Denmark-based consumer electronics player is introducing a new model in Malaysia for the year – The Jabra Elite 65t.

The difference between the Elite Sport and Elite 65t is that the latter is not really built for sports unlike the former. It’s designed more to rival what is known as truly wireless earbuds/ headphones such as Bragi Dash, Apple Pods and Samsung IconX in today’s market.

Let’s dive straight into it.

The design of the Elite 65t is very much like the Elite Sport. To be fair, there isn’t much design innovation that can come from a purely wireless earbud design as there isn’t much space to work with the electronics and at the same time have a tiny speaker attached to your ear canal.

Nonetheless, I felt that the Elite 65t is more comfortable than the Elite Sport of the previous year. Again, the charging case is similar to the one the Elite Sport had, except that Jabra has managed to shrink the size by about 25%, which is a welcome change. 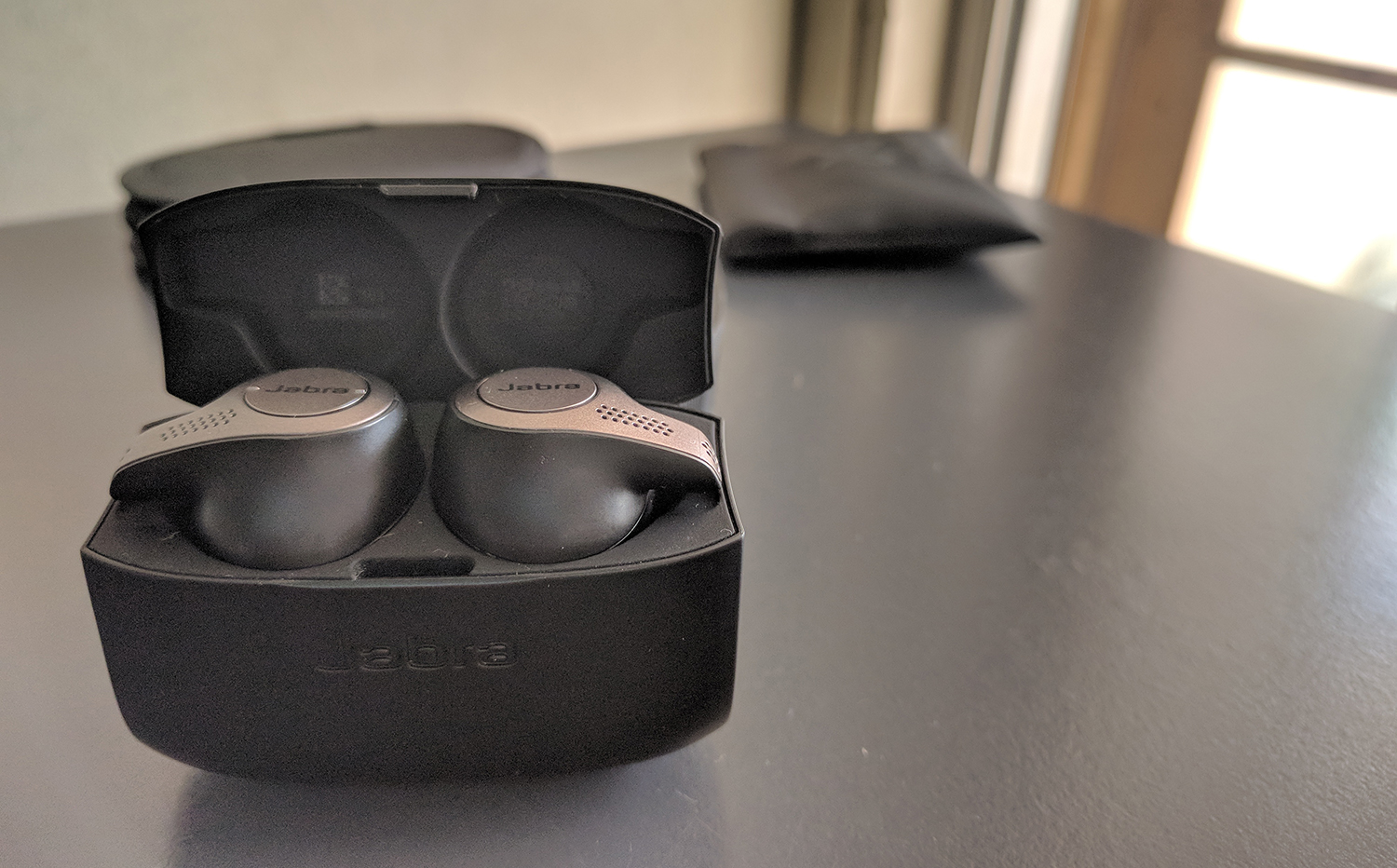 Opening up the case, you’ll see two snugly fitted earbuds. Like most other designs, the case also acts as a battery charger. To initially charge the earbuds, you’ll need to connect the charging case to a standard USB charger for about 1.5 hours.

While charging the case, the earbuds also get charged. When you place the earbuds back in the cradle, it turns off, and is charged by the case, which has an in-built battery.

I found the Elite 65t slightly more ergonomically designed compared to the Elite Sport. However, while the Elite Sport was rated at IP67 due to its sporting nature, the Elite 65t is only IP55 rated. This means it’s somewhat protected from dust ingress and from low pressure water jets from any direction. For more on IP ratings, check this out.

On each side of the earbud, you have the controllers. On the right is the multi-function button, which is used to turn on/off the unit, answer calls, and to do Bluetooth pairing. On the left, you have the volume up/down, which you press once to activate. For the next track/previous track functions, you long press the buttons.

I remembered that the experience of volume up/down and next/previous track wasn’t very good for me on the Elite Sport but I’m pleasantly surprised that Jabra has made the response to touch much better.

Back then, the problem was that the buttons were very stiff and pressing it meant hurting my ear canal. I’m happy to report that this is no longer the case with the Elite 65t. Kudos to Jabra for this.

Besides the controllers, the Elite 65t also features a “pass-through” feature aptly called HearThrough, which essentially allows you to hear ambient noise when the music is not on. This way, you can hear people speaking to you without having to take out the earbuds. You access this feature by double pressing the right side multi-function button.

The manual says HearThrough utilises the built-in microphones to enable you to pay attention to your surroundings and engage in conversation without needing to remove the earbuds.

HearThrough settings can be configured using the Jabra Sound+ app.

As usual, upon opening your package, you’ll find various earbud sizes for you to choose from. Comfort-wise, I did find the Elite 65t very light to wear. However, this still isn’t enough to avert the discomfort I felt after an hour or two of using the device.

A quick check around some chat forums also yielded the same conclusion. Personally, I think this is unavoidable as it just comes down to the way true wireless earbuds are made – the weight will wear down your ear canals compared to say a partially wired Bluetooth headset.

Lastly, one big selling factor going for the Elite 65t is that it’s equipped with Bluetooth 5.0, the latest in the standard. Apple’s iPhone 8 and 8 Plus, iPhone X, and Samsung Galaxy S8 already support it. Other smartphones will follow on so you’re quite future-proofed in this area.

Overall, I would describe the Elite 65ts as well engineered and having a solid quality to it. The rated battery life for the Elite 65t is 15 hours: Five hours on the earbuds and an additional 10 hours using the case to charge the unit, or roughly three cycles of charge.

As always, these are manufacturer’s claims as real-life readings are closer to 10 to 12 hours collectively using the device and charger, depending on how loud you listen and how far away your music device is. This isn’t a bad experience and is about what you can expect from such a small battery.

To conserve battery, the right earbud will automatically power off when it is out of range of your smartphone for 15 minutes and is not in the charging case, or when it has been inactive for one hour.

Setup for the Elite 65t is pretty straightforward. Just ensure your device is off, and then long press the right multi-function button past the point where the earbuds turn on. After a second or so, you’ll hear a voice asking you to pair with your music device, and upon selecting the Jabra on your list, you’re good to go.

Let’s get to performance.

The first thing that struck me about the Elite 65t was how clear it was. The sound was balanced, the highs and mids were pretty great. Vocals were also great.

I found the device more suited to vocal and light material such as jazz, classical and mainstream pop stuff, rather than heavy and complex riffs found in some rock and pop music. Now if you’re the type who loves lots of bass, look elsewhere as this Elite 65t doesn’t have such a character.

You’ll have to install the Jabra Sound+ app, available on both the Apple App Store and Google Play Store, if you want to interact with the settings of the device. Curiously, the app won’t work unless you install another companion app called Jabra Service.

The app allows you to tune your equaliser settings as well as select your voice assistant of choice. The app is not absolutely necessary as you can use the Elite 65t without any interaction with the app, like most wireless earbuds.

As for Bluetooth range, this was pretty impressive. In one test, I was still connected to my smartphone at least 15 meters away and with two walls in between. Only when I moved further out did my connection get cut.

As for noise isolation: Given that these aren’t active noise cancelling devices like the two Sonys I recently reviewed (here and here), the isolation is passive. But to my surprise, it wasn’t too bad. Softer sounds such as fans and air conditioner compressors were kept out. Only louder street noises seeped through.

Clarity when using the device to speak during a call was also pretty good. No complaints here.

Finally, for the most part, the Elite 65t sat quite steadily in my ear canals, even when I was at the gym doing my workouts. For RM749, I find the Elite 65t a good bargain. The sound was great, battery life respectable and well balanced and the build quality was also good.

The only caveat I had is the wearability of the device; it gets uncomfortable after an hour or two of use. It may be that it’s dependent on the wearer’s habits and size of ear canals but this is definitely something to think about when making a purchase decision.

Other than that, the Jabra Elite 65t is a worthy consideration.