A MONTH or so back, I took Sony’s WH-1000MX2 noise cancellation headphones for a spin, where I came back mostly impressed with it.

This month, I try Sony’s variant the WI-1000X (WI), the Japanese giant’s earbud version of the device. These days, earbud noise cancellers are an option that most would like to have. Their advantages are clear: They’re portable, lightweight and do not heat up around your ear when you wear them for long periods.

Conversely true is the fact that because they do not cover the whole ear, you may not get complete isolation from your surroundings. But that’s a trade-off that most are willing to put up with.

Sony’s design follows industry leader Bose in this respect. The American brand has the QC35s as the headphone version, while the QC30s are the equivalent earbud noise canceller. For this review, I will be doing a quick comparison with the QC30s, which I personally own. Right off the bat, I can tell you the WI is pretty well built. The unit comprises a semi-circular U-shaped band that sits on your neck. Out from this band comes two cords; one that connects the right earbud to your ear; while the other connects to the left. The back of the band is wrapped with aluminium and that makes the band flexible and bendable.

On the inner right side of the band is a green LED, which indicates that the unit is in operation. On the left side of the band, you have your controls; play/ pause/ next track/ previous track.

Further up are the volume +/ - buttons. And still further up is the on/ off button. Charging is via USB-B and is on the left side of the device. Lastly, there is a button called the ‘ambient sound,’ which users can use to manually let in ambient sound or switch off noise cancellation altogether.

As opposed to the Bose QC30, which has a dedicated control on the right cable, Sony opted to put the control on the band itself. This makes getting to it difficult, especially if you’re using the device on the move or at the gym. I found it took a while to get used to where all the buttons are because you have to feel them out.

Comfort-wise, I did the find the weight of the WI sitting on the neck comparable to the Bose QC 30s. However, the latter is more ergonomically shaped and thus more comfortable on the neck when compared to the WI (see above).

As with all neckband-type audio devices, you’ll find that the band swings to either the right or left when you’re walking or going about your normal routines. This happens too with the Bose QC30 so it’s not really Sony’s fault – it’s just the way these neckband-type devices are designed, something you have to take note of when shopping for one. 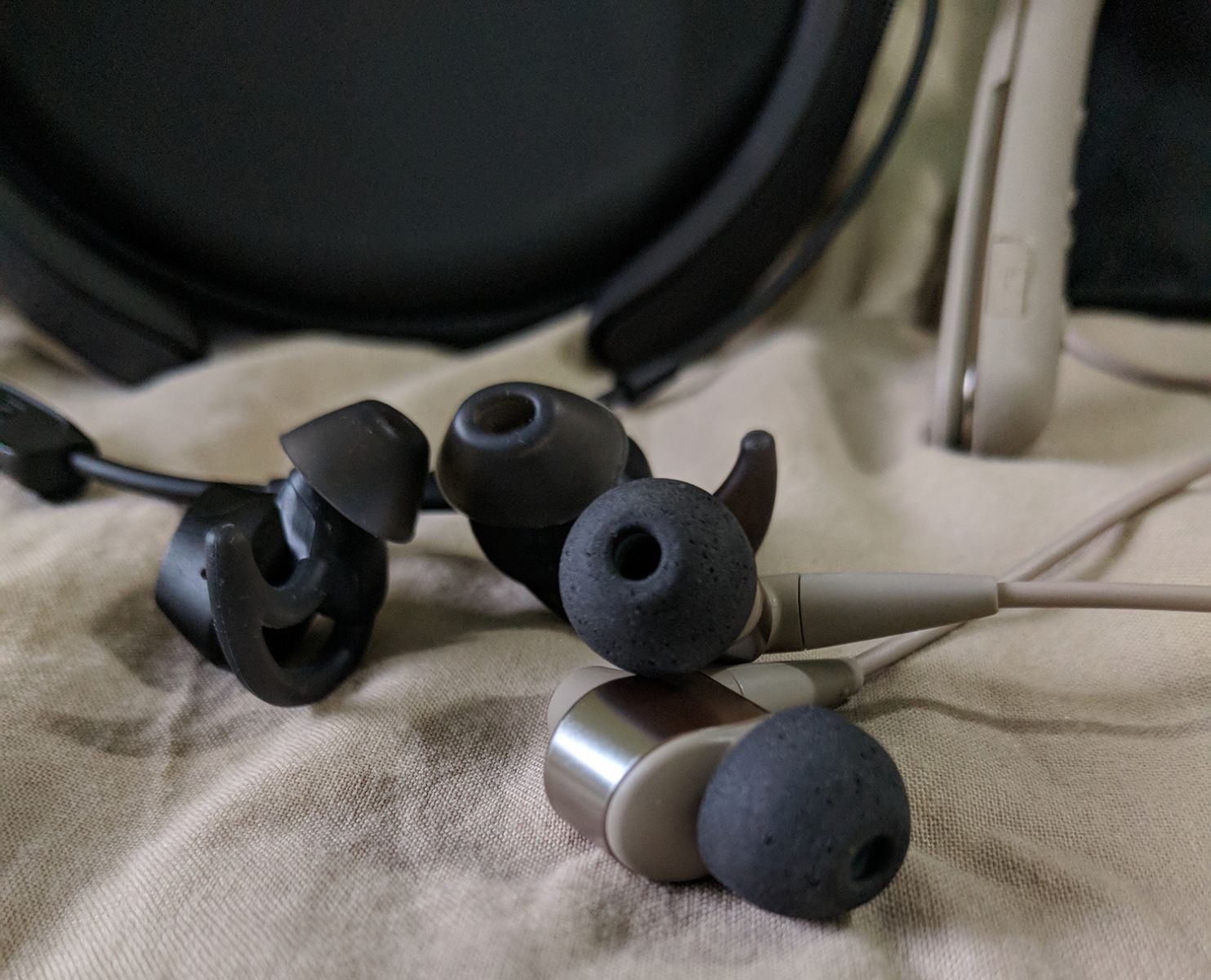 On the earbuds end, the Sony was not as comfortable as the Bose. I found the Sony earbuds good but after a couple of hours, it does get a little tiresome to wear. But still the comfort was better than full headphone cups, ala the WH-1000MX2. Noise isolation is also better with the Bose QC30, as its wingtips and earbuds do keep them in place more than the Sony.

The Sony also comes with a pouch, which holds a choice of earbuds of different sizes, so you can pick one that fits your ear type. It also houses a charging cable as well as a specialised 1- meter cable for you to connect to your playing device via a 3.5 headphone jack.

This is especially important when you’re using the device on a plane, something that the Bose QC30 does not have. Do note that you’ll need to carry this as the other end of the connection is via USB-B and so you can’t use a standard 3.5 jack to connect to the device. Also, when using the cable, the controls on the WI aren’t active so you can’t control the volume and track functions via the neckband.

The WIs come in two colours; black and beige. Overall, the WI were well-built, and are fairly comfortable to wear unless you’re wearing them for a long time. The rated battery life of the WIs are 10 hours playback with noise-cancelling on or 13 hours with noise cancelling off. In reality, the figures come to about 80% to 90% of that figure. So, if you’re on a long-haul flight, you might want to charge your device whenever you’re not using the unit.

Like its bigger sibling, the time it takes to fully charge the WI is painfully long – 3.5 hours. This is what I feel Sony will need to address in its next iteration of devices: To switch to USB-C ports so that it can incorporate fast/ quick charging technology.

As for the features, this is where the Sony shines. Firstly, it supports most new audio codecs such as SBC, AAC, aptX and aptX HD and LDAC, which should delight buyers.

LDAC is Sony’s proprietary high definition sound format and while the WH-1000MX2 supports all the aforementioned formats, you’ll need a player that transmits those corresponding formats to derive the maximum benefit from them. For more on Bluetooth codecs, go here.

Besides this, Sony boasts of a few other features such as automatic AI noise cancelling, atmospheric pressure optimising and ambient sound mode. All these features can be accessed via Sony’s headphone app.

The Ambient Sound Control feature is pretty effective. Using different profiles, users can set levels of noise cancellation at different levels. In all, you have four profiles: Staying, walking, running, and transport mode.

Essentially, it allows the user to tune how much noise gets through your device. For example, if you’re running, you wouldn’t quite want complete noise cancellation as you would need have some noise let through so that you’ll be aware of your surroundings. Conversely, in a train or plane, you would want full noise cancellation.

There is also an equaliser in the app you can play around with but as for me, I’d rather stick with the setting already set on my smartphone music player.

A caveat though: As with all noise cancellation devices, not every bit of noise can be cancelled. Sometime, people expect these devices to do just that. But remember they are not soundproof devices; they are noise cancellers. The devices are great at cutting of constant noises and noise with variable volume such as voice, TV, radio, cars on the street won’t be completely cut off.

Another point about the WI’s audio performance is that it’s great. High treble was just enough, the mids were transparent enough for vocal material, and the bass was punchy while not being distorted. I found the unit comparable to the WH-1000MX2, which means sound quality is better than the Bose QC30.

In the final analysis, the Sony WI-1000X is a worthy buy, if you’re looking at high-end noise cancellers. They are well made, have great sound and are generally comfortable to use. The only downsides I see to this is the long charging time. At the recommended retail price of RM1,499, this device is cheaper than its Bose equivalent at RM1,590. Do also note that due to the government's decision to zero rate GST, you might want to wait if Sony reduces the price in the near future.

Are there alternatives? Sure.

Big names besides Bose include Sennheiser, Beats, AKG, and a host of others. Other cheaper ones include Audio Technica, Phiaton and even Samsung. For a budget option, you can try a relatively unknown Korean brand, but nonetheless quite a good noise canceller called TaoTronics. Most of these are however only available online, but they are options nonetheless.