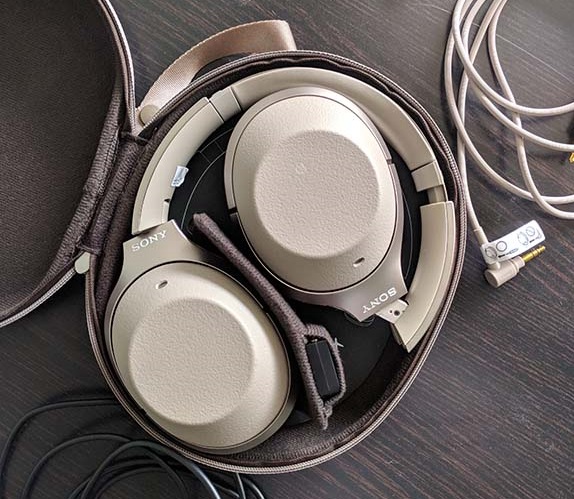 NOISE cancellation headphones have come a long way since they were just wired in nature. Today, major brands have incorporated Bluetooth-enabled models, but without compromising on both sound quality and noise cancellation features.

The leading de facto brand is Bose but others now play in its pool now. A few years ago, Sony Corp introduced the MDR-1000X and most recently, followed up with the WH-1000MX2 (WH), which as the name suggests, is a second-generation noise cancelling device from the Japanese maker.

So, let’s get straight down to it.

Sony has always prided itself on being a consumer electronics company that has great pedigree in the products that it makes, and the WH is no different. On the face of it, Sony has built a very solid headphone that is practical to use and store.

The ear muffs are made of soft leather and are, for the most part, quite comfortable to use. The only issue I had with the over-the-ear headphones is that it can get quite hot using them over long periods of time, which is the case with the WH. Using them in an air-conditioned environment helps though.

Some reviews do note that Bose’s QC35s, are more comfortable than the Sony unit but I’ve no direct experience of this. All I can say is that with my limited experience with the QC35, I do find that their ear muffs feel softer than the WH. In terms of colour, there isn’t a lot to choose from and Sony terms them as ‘black’ and ‘gold.’ The review unit I had was the gold one, but I think the colour is more beige than gold.

Storage of the WH comes courtesy of an oval carrying case, which I find to be pretty solid and as compact as can be for a headphone this size. The WH also comes equipped with a 1.5m cable, which is pretty handy should you not want to use the wireless Bluetooth for receiving music from your smartphone or music player. This is quite useful for frequent travellers, who can use it to connect with the plane’s onboard entertainment system via a standard 1-to-2 jack adapter supplied by Sony.

The WH also supports hands-free calling and touch controls (more about these features later). Like the capacitive screens we’re so used to on our smartphones, users are able to control volume up/ down and next track/last track by merely swiping across the surface of the right ear cup.

Double tapping the centre of the ear cups plays or pauses your tracks. If you’re on a phone call, double tapping it will answer/terminate your call. However, I did find that when using the cable connected to your player, the touch controls didn’t work. It’s probably because the command controls don’t traverse the cable as opposed to when it’s working in Bluetooth mode.

This was quite frustrating during a recent long-distance trip I took on a plane. So, do take note. The WH weighs 272 grammes and is slightly heavier than The Bose weighing in at 235 grammes.

Lastly, Sony says users of Google Assistant will receive support for this feature on the WH via a firmware upgrade coupled with the use of Sony’s Headphone app. The upgrade is expected to come during the second quarter of this year.

All in all, the WH exudes the premium quality and feel you would expect from a flagship noise cancelling headphones that rivals the best in the market. Full specification for the WH can be found here. Practically, this means about three to four days of usage in various scenarios such as working at the desk, watching a movie, or sitting in a car or train. My test on a plane gave me quite good battery life; I recently made an 20-hour plane journey (to-and-fro), with Bluetooth and noise cancellation on a single charge.

The numbers are pretty good and shouldn’t give you any issues whether you’re a casual user or a frequent flyer. If there is any weakness it is that charging the unit takes a painful four hours, which is a long time to wait unless you’re doing so while sleeping.

My advice is to charge the WH whenever you have a chance, say after two days of straight usage for a hour or so when you’re working at your desk. This keeps the thing going without you having to worry about running out of juice.

Besides the noise cancelling feature, the WH comes equipped with quite a few nifty features. On the sides of the left ear cup, you have two buttons. The first is the power on/off button. The second is a toggle switch, which allows you to turn on what Sony calls ‘ambient mode.’

This essentially allows partial ambient sounds to come through the unit, thus allowing you to talk to someone temporarily. Toggle this switch one more time and you’ll turn off the noise cancelling altogether.

I found the ambient mode convenient to have; however, the WH does amplify the surrounding sounds a tad too much for my liking. For example, if you’re standing under or next to a fan, you’ll hear the noise of the wind quite loudly, and that’s simply quite irritating.

One useful feature that was carried over from WH’s predecessor the MDR-1000X is that you can mute your music playback by covering the right ear cup with your right palm, arguably the coolest feature the WH possesses.

Personally, while the capacitive touch controls are quite cool to use, it does take a bit of getting used to. Sometimes, when I was trying to lessen the volume, I ended up inadvertently triggering the next/last track instead.

I’m not a big fan of using it and would have preferred that Sony built in physical buttons for controls, much like how Bose has done with the QC35s. The muting function however, was very useful.

Next page: Does it truly measure up?