In a blog posting on Aug 31, the search giant said, “Android Wear for iOS is rolling out today. Just pair your iPhone (iPhone 5, 5c, 5s, 6, or 6 Plus running iOS 8.2+) with an Android Wear watch to bring simple and helpful information right to your wrist.”

The Android Wear app is available for free through Apple’s App Store.

Google noted that it currently works with the LG Watch Urbane and all future Android Wear watches, including Huawei’s upcoming product.

It also stated Asus and Motorola will also support iOS, but didn’t mention specific models nor indicate whether it would be compatible with existing Android Wear devices.

Digital News Asia (DNA) however, tested it with the original Asus ZenWatch by performing a soft reset on the watch (within the Settings menu) and managed to have it paired up to an iPhone 6 with no issues (pic below). 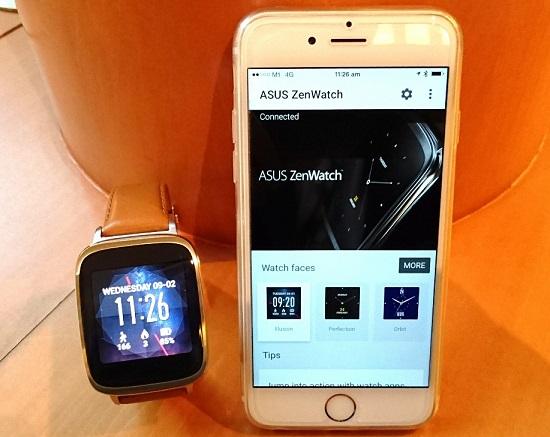 The features include the ability to check information like phone calls, messages and notifications from apps such as Facebook Messenger, Skype and Hangouts, as well as skip tracks and adjust the volume on Apple Music.

But unlike on Android, you won’t be able to respond back on the watch itself. You would still need an Apple Watch in order to make voice calls or dictate a reply.

Other functions include Google Now, which provides calendar notifications, weather updates, traffic information and personalised headlines on the watch screen.

It also works with the Google Fit app, so you can set fitness goals and receive daily and weekly views of your progress.

Using the ZenWatch, this writer was also able to measure his heart rate using the built-in heart rate sensor.

“This will help it to have a bigger audience to have more choices apart from the Apple Watch.

“However, due to the limited functions that it can support on the iOS, the lack of available services on the Android Wear smartwatches will deter the adoption by iPhone users,” he said via email.

Liew said he had expected this move by Google, since limiting its smartwatch software support to a single platform won’t help the market to grow.

“As the market is still exploring to find its killer applications, having a wider audience will help in the adoption of smartwatches. Eventually, more smartwatch makers will open up their OS (operating system) to be compatible with other smartphone OSes,” he added.

Only time will tell if that will actually take place, since Samsung just announced its new Gear 2 smartwatch (pic below) which is powered by the company’s very own Tizen platform, rather than Android Wear. Despite being one of the earliest vendors to produce a smartwatch, with at least five different models under its belt, the South Korean giant is ranked third behind Apple and Garmin, according to a recent report by IDC.

“Given Samsung's history of making its latest wearable devices compatible only with Samsung’s top models and nearly exclusive reliance on Tizen, the company has limited its potential reach,” the report noted.