SONY was one of the earliest vendors to get into the wearable space, launching its first smartwatch in 2012 and then following up with a second version a year later.

But the Smartwatch 3 is Sony’s first wearable that runs on the Android Wear platform – an operating system from Google that works exclusively with Android smartphones.

The Sony Smartwatch 3 initially came with a black rubber strap that made it look like an unattractive sports watch, but you can easily remove the watch from the band and change it for a different coloured one (white and pink are available).

It was also easy to adjust the strap, as all you had to do was to move the clasp along the rubber strap.

However, it’s a completely different story with the stainless steel Smartwatch 3. What Sony should have done was to include a label to inform consumers that the steel band requires a watch retailer to help you get the right fit for your wrist. We wasted at least an hour trying to figure out how to remove the links from the steel strap, and then trying to remove them with whatever tools we had at our disposal.

After all, Sony did provide some two extra steel links for larger wrists, so why didn’t it include instructions on how to remove the pins that connect them together?

In the end, we gave up and sought the help from a watch shop uncle, who kindly helped us get a proper fit by removing some links, without charging us a cent.

That initial hiccup aside, the Smartwatch 3 certainly looks a lot more stylish compared with the rubber strap, and something you wouldn’t mind wearing to work or a dinner date. The matte steel finish, coupled with the shiny steel clasp, exudes a professional, premium look. The clasp clicks in place securely and is nicely flushed with the rest of the strap. To release it, simply press the buttons on the both sides of the clasp. Like its previous iterations, the Smartwatch 3 has a square display, but it’s pleasantly rectangular in shape due to the thicker bezel below the screen. It’s softened by slight curves on the corners that join nicely to the band. Size-wise, the face is similar to a fitness watch and suitable for medium to large wrists.

Still, the shape may not suit everyone, especially those who prefer round watch faces like the Moto 360 or the LG G Watch R.

A power button sits on the right side which doubles as a switch for the display light (short press), as well as the Settings menu (long press), but using the touch screen was easier.

Sony utilised a ‘transflective’ LCD display that can emit light and also reflect light, which means that in well-lit situations, you could still read the display without activing the back light, thereby conserving on power. The downside is that colours on the display look a little washed out, and you won’t get the high contrast levels and vibrancy found on Super AMOLED screens used in products from Asus and Samsung.

But in terms of size and sharpness, the 1.6-inch touchscreen display is conveniently large enough for swiping gestures, and the 360 x 360 resolution is standard for smartwatches today.

Inside, the Smartwatch 3 is powered by a Qualcomm Snapdragon 400 chipset running at 1.2 GHz, providing more than enough firepower to run Android Wear. It comes with half a GB of memory and 4GB of storage, mostly for storing songs and voice recordings.

Additionally, the device comes with Near Field Communications (NFC) and Bluetooth 4.0 wireless tech, required for pairing up with your smartphone and wireless headphones for direct audio playback.

The NFC makes the pairing process a lot easier but you’ll need an NFC-enabled smartphone as well.

The Smartwatch 3 also comes with built-in GPS (Global Positioning System) – usually found in fitness-centric products from the likes of Garmin and Polar, but unique among Android Wear watches. It’s also IP68-certified, which means that it is dust- and water-proof. In our climate, where heavy monsoon rains are unpredictable and frequent during certain parts of the year, that definitely helps – especially when you go for a run or bicycle ride.

The 420mAh battery is one of the largest ones on an Android Wear smartwatch, but due to the relatively power-hungry software and the backlit display, you’ll have to charge it up every two days.

And if you’re playing music directly from the watch, or using the GPS to track your run, don’t expect it to last beyond a day. Battery life is still one of the biggest gripes about smartwatches, be it Android or Apple, so we were hoping for a quick and easy way to charge up the watch. Sony opted for the common micro USB standard, which is clever – but it placed the charging port under the watch face, sealed with a rubber cover. We’re convinced that cover will tear off over time, and it was cumbersome to plug in the cable or even remove it due to the strap getting in the way.

Still, it juiced up pretty quickly and was fully charged within 40 minutes.

Finally, it includes a microphone for voice commands, voice recording and sending messages.

Android Wear is a software platform that works pretty much the same across all brands of smartwatches, so we’ll just focus on some features that are specific to Sony – which aren’t that many, to be honest. 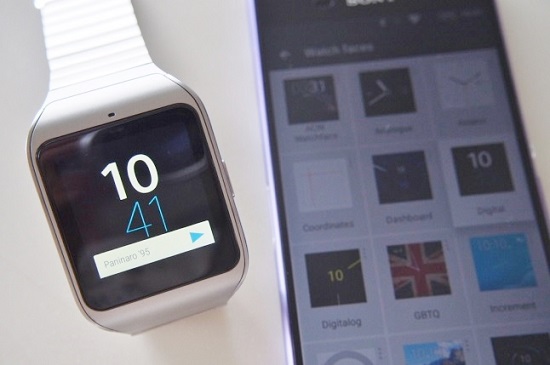 The company added specific watch faces (but you can purchase or download many more from the Google Play app store) and included a premium subscription to the Todoist task manager app.

The GPS hardware is barely supported, with Google’s My Tracks being the one app that worked well, although we understand other apps like Runkeeper have included support for it (it didn’t seem to work in our own tests, unfortunately).

If you’re using an Xperia device, Sony’s Lifelog app will utilise the data from the watch (like how many steps you’ve taken in a day) to add to your daily activities.

You can of course transfer music from the Walkman application to the smartwatch, but Google’s Play music application has this feature too. Generally it’s Android Wear without any bells and whistles, unlike for example Asus, which includes an app to lock the smartphone’s screen should the watch and phone exceed a certain distance from each other.

Android Wear supports messaging apps like WhatsApp which lets you read your notifications on the watch and send a reply through the phone by converting your speech to text (although the speech recognition is a hit and miss). It does help when it comes to ignoring and swiping away the unimportant notifications, so you don’t have to keep checking your smartphone – that’s truly a practical time-saver.

The smartwatch market is still nascent and new models are coming out every few months. As such, buying the Sony Smartwatch 3 Steel edition at the price of S$388 (retail stores) or RM959 (online) may seem like a luxury, especially when it’s more expensive than the regular model, which costs S$289/ RM799.

However, between the two, we believe the extra dollars are worth it since it is stylish enough to be used as a fashion accessory, rather than exist as a sports band or a geek toy. Compared with other Android Wear devices, we would say it’s one of the better models to consider, since the size is a better fit for [arguably] thinner Asian wrists, it’s weather-proof, and has a good-sized battery built-in.