THE midpoint of 2015 should certainly be historically significant. After all, it will mark the birth of Apple’s new music platform.

Back in 2001, the technology giant – then a niche PC maker – famously changed the game in the music industry when it introduced the iPod and its companion iTunes online music store.

Almost a decade and a half later, with hundreds of millions of iPhone, iPad, iPod and Apple TV users connected to iTunes, as well as Windows and Mac desktops, Apple hopes to change the world once again with a new offering, simply called Apple Music.

The company recently unveiled the service during its Worldwide Developers Conference keynote, announcing it would go live on June 30, and as promised, Apple Music arrived on July 1 local time through a software update.

The 218MB download brings iOS to version 8.4 and replaces both the Music and iTunes Store icons with Apple Music.  Along with that, the iTunes desktop software for Windows and Mac will also prompt users to upgrade to the latest 12.2 version.

A global rollout of this magnitude is clearly no mean feat, and by many accounts was a smooth one. There were, expectedly, some issues reported by users on various blog forums and Apple fan-sites worldwide.

Even our own initial tests showed that some of the functionalities didn’t work, or worse, crashed the app itself. I’m certain the technical hiccups will go away over time, but the complexity of the interface was more of a problem for me.

This, I suspect, is due to the nature of Apple Music itself, which isn’t really a single service, but a platform that cobbles together a few different services. Two of the components should be familiar with current users. The first is ‘My Music’ which refers to tracks you already own. These are the files you’ve ripped from CDs or obtained from ‘unofficial’ sources (oh, of course you didn’t) and songs you’ve purchased from iTunes.

This content could be residing in your current hard drive, or if you have an iTunes Match subscription, are also available through iCloud and accessible across your devices.

The playlists you’ve created continue to be here, and like before, you can create new playlists or edit the current ones. Things get potentially overwhelming when you start adding Apple’s curated playlists to ‘My Music’ as well, resulting in the need to start organising the playlists or filtering the views.

Really?  Filtering views in a music app, you may ask?  Well, yes.

Did Apple make it easier to just send transfer songs directly from the PC to a music folder in the device using a USB cable, without going through the hassle of using iTunes on the desktop?

Nope, still out of luck there. 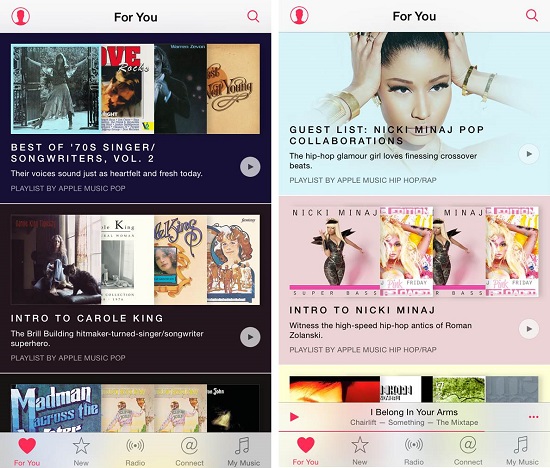 With Apple Music, the company has finally introduced a subscription-based, on-demand music streaming service, culminated from its US$3 billion acquisition of Beats Electronics.

The streaming portion of Apple Music is essentially a beefed-up, rebranded version of the struggling Beats Music service, enhanced with design cues from Cupertino, content from iTunes, and the global marketing and distribution machinery of the iPhone maker.

Here is where, as a paid subscriber, you’ll be able to search through Apple’s vast library of tracks and music videos and create your very own playlists, listen or watch them online or save them for offline use.

Alternatively, you could allow Apple’s algorithms to pick the music you’ll most likely enjoy, based on your initial set of preferences. These suggested playlists take up the default home section of the service, known as ‘For You.’ 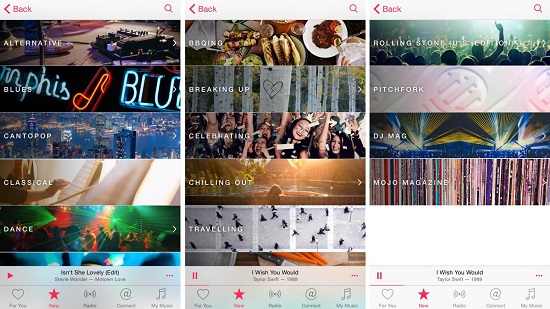 Within the ‘New’ section, you can browse through playlists curated by Apple’s ‘music editors’, as well as experts from music magazines like Rolling Stone or DJ Mag.

The biggest interface issue here is the label. ‘New’ is just misleading, since much of the content isn’t new.

This is also the main section where users would be able to browse playlists based on music genre and activities (like ‘Travelling’ or ‘Chilling Out’) – but you’ll need to spend time exploring this area  before you find it.

It’s surprisingly counter-intuitive coming from Cupertino. Also, none of this is game-changing, not when it existed as Beats Music, and certainly not now when it’s operated by Apple.

Rivals like Spotify, Deezer, Rdio and at least a dozen other players in the space already have similar search and browse functions, specialised channels, and more ‘expertly curated’ playlists than we care to remember.

Even MixRadio, a streaming service developed by Nokia and now part of Japanese messaging company Line, pioneered that very same playlist creation function based on a user’s music preferences. Plus, it offers offline listening for free. Clearly late to the party, Apple therefore is trying to differentiate itself with two additional tricks up its sleeves.

This broadcast is available in more than a hundred countries including Malaysia, Thailand and Indonesia, but is not accessible in Singapore and Taiwan at the time of writing.

A related aspect of this service is Apple Music Radio, or iTunes Radio with a new moniker, which continuously streams songs based on a particular genre. Apple Music subscribers have an unlimited ability to skip unwanted songs. Non-members get limited skips. Then, there’s ‘Connect’, a social media platform for artistes or curators to upload related content, such as behind the scenes videos. This is a place where fans or critics can leave comments and feedback to the artistes they’re following.

It’s too early to tell how this section will pan out since the number of feeds we’ve seen has been limited so far. But it looks like it has the potential to generate news and excitement among fans if the artistes themselves put effort in keeping their feeds fresh and interesting. I did mention that all the features I’ve described are available only to paid subscribers. So what will non-paying users get?

Those who choose not to subscribe will still get to listen to Beats 1 (unless you live in Singapore or a handful of other excluded markets) and Apple Music Radio (with limited song skips), as well as follow their favourite artistes’ feeds on Connect.

At the initial welcome screen, you’re greeted with a prompt to try Apple Music for free for 90 days, after which a paid subscription model will kick in. If you decline, you’re taken straight to your own music library.

Should you accept, the service will ask which subscription option you would prefer – an individual plan will set you back US$10 a month while a family membership that supports up to six users will cost US$15.

Next, it will link up to your iTunes account for billing approvals, and then to the music preference engine, which consists of bright red bubbles representing different genres and artistes for you to choose from. 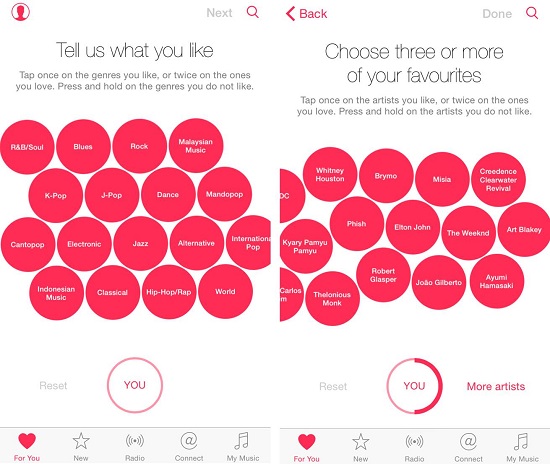 Based on your choices, the service takes you to the ‘For You’ screen with playlists that will hopefully suit your taste.

Do note that after the three-month trial period is up, the service will automatically renew and begin charging your credit card for the service, so if you don’t plan to continue the service, head to the Account section and turn off the auto-renewal function before the 90 days is over.

And what about the venerable iTunes Store, the largest digital content retailer on the planet with over 40 million tracks available for sale?

Within the new app, this component has been relegated to being a second-level menu option, rather than its own dedicated section, since the iTunes Store continues to have its own icon - although on the desktop, Apple Music is integrated into the iTunes software along with the Store.

Within Apple Music, ‘Show in iTunes Store’ is part of the list of actions whenever you tap on ‘More’ (look for the three tiny dots) for any song or album. Tap on that and you’ll be taken to the Store interface where you can purchase the content.

From here, you can then navigate to other parts of the Store in order to browse and buy songs, films and ringtones. Once you’re in the Store, however, there is no easy way to head back out to the Music app, except to hit the main Menu key on the device and relaunch the Music app.

Perhaps only Apple is able to pull off such a broad-ranging end-to-end platform that attempts to offer something for everyone, from single purchase downloads to subscription-based on-demand streaming to free non-interactive Internet radio and even its own 24-hour global radio broadcast and an artiste outreach service for good measure.

At the same time, bringing these different facets together takes a toll on the user experience, since the more options there are, the more complicated the interface gets, particularly when trying to navigate around the app.

It also assumes that users understand what those tiny (or small to the point of being hard to find) icons all over the app represent, and that may not necessarily be the case.

Important functions like direct access to the iTunes Store and adding tracks to My Music have ended up in second-level menus, reducing their visibility.

Not to mention that Apple’s recommended playlists are currently limited in number and scope, but I’m sure that will definitely expand over time.

At least we all have 90 days to play around with Apple Music, which in itself is a fantastic deal and one that not many service providers can afford to give away.

So for now, let’s enjoy that while it lasts, but I, for one, have switched off the auto-renewal function.