SONY Corp’s latest corporate strategy update, issued on Feb 18, is the biggest indication yet that the company is looking to find an exit for its loss-making smartphone arm, Sony Mobile Communications.

According to Sony then, the plan was to “integrate the mobile phone business as a vital element of its electronics business, with the aim of accelerating convergence between Sony’s line-up of network enabled consumer electronics products.”

That move towards convergence did materialise somewhat, especially in the area of  software – examples include the Walkman music app in Sony’s phones and tablets, the ability to stream PlayStation 4 games to the Xperia Z3 smartphone, and display technology gleaned from Sony’s Bravia TV business.

The 100% Sony mobile arm very quickly revamped its portfolio in 2012, focusing its efforts on the Xperia Z flagship, with the Z2 and Z3 follow-ups launching like clockwork within nine months of their predecessor’s arrival.

Mini versions of the Z were also introduced to address the market for smaller screen devices, while Xperia Z tablets were launched to target consumers who needed large display media consumption gadgets.

These Android-powered smartphones received generally positive reviews, particularly for the design, along with water- and dust-proof capabilities. Sony’s improvements on the updated models garnered even more kudos, especially with the Z3 family.

However, one point which reviewers often brought up was the premium price tag attached to Sony’s Xperia smartphones.

Costing within the same range as the Apple iPhone and Samsung’s flagship Galaxy S series, Sony’s models struggled to compete, particularly in markets where consumers pay the full price for their smartphone fix, rather than relying on operator subsidies.

Incidentally, these are the very same markets that have experienced the highest growth in smartphone adoption in the last three years – China, India and South-East Asia.

In these regions, consumers are not only highly spec- and price-sensitive, but the competition from local phone manufacturers is also very intense.

In China for instance, the last three years saw the rise and rise of highly credible Chinese manufacturers like Xiaomi and OnePlus that offer great design and comparable technology at a fraction of Sony’s prices.

Xiaomi, in fact, recently topped the rankings in the China smartphone market, according to research firm IDC’s numbers, beating Samsung for the first time.

Chinese brands have flourished alongside the growth of e-commerce in the country, where online marketing and distribution methods have enabled devices to be sold directly to consumers, bringing down prices even further.

“With the reduction in operator subsidy, operator-centric vendors in the past such as ZTE, Huawei and Coolpad have increased their shipments online through direct sales as well as through e-tailers,” said IDC Asia Pacific senior market analyst Tay Xiaohan.

“They have also established online brands for this purpose,” he said in a research note.

Meanwhile in India, local players like Micromax, Karbonn and Lava – all occupying a space in the country’s Top 5 smartphone vendors list – take advantage of their lower handset cost and extensive physical distribution network, to beat global players like Sony and HTC.

The growth from these emerging markets have also outshone mature smartphone markets like Japan, Western Europe and the United States, where Sony’s brand premium is appreciated and operator subsidies are available.

These subsidies often hide the true price of the phone, as they come along with a two-year carrier contract. Sony can also take advantage of its deep relationships with telecom operators in these countries to drive distribution and sales.

But even in these mature markets, Sony faces Android smartphone giant Samsung and a resurgent LG from South Korea, as well as competitive (and award-winning) smartphones from Taiwanese vendor HTC.

The low-end and mid-range offerings from these rivals, such as Samsung’s Galaxy Ace or HTC’s Desire series, have largely overshadowed Sony’s entries such as Xperia C3, T3 and E1.

Considering its challenges on all fronts, it comes as no surprise then that the losses have racked up at Sony’s mobile division. Despite having highly rated devices and a long history in this field, Sony just isn’t winning at where it matters most – in consumers’ pockets. 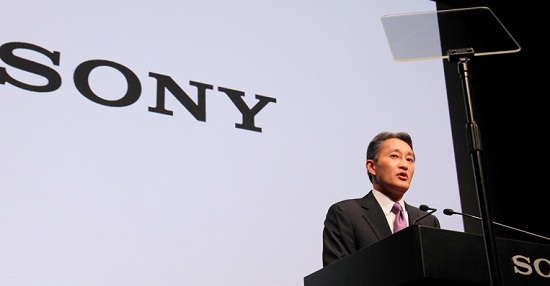 Despite the recent layoff of 1,000 employees back in late January, in line with its stated plan to shrink its mobile division workforce by about 30% by the end of next fiscal year (March 2016), Sony’s chief executive Kaz Hirai (pic above) told members of the press during the strategy briefing that he would not “rule out considering an exit strategy.”

It doesn’t mean that Sony will be out of the mobile space completely. The company’s business in selling camera CMOS (complementary metal-oxide semiconductor) image sensors for smartphones to customers like Apple is booming, and clearly a growth area that the electronics giant will invest in by “increasing production and enhancing R&D.”