US-based company Netflix Inc blew the lid wide open by announcing that it is rolling out its video-on-demand (VOD) service in 130 new countries, including Malaysia and other South-East Asian markets, but regional players were unfazed.

Indeed, Singapore’s Hooq and Malaysia’s iflix – which were both launched last year – said they were not only prepared, but also welcomed the competition.

“Hooq wholeheartedly welcomes the entrance of a large established player like Netflix to quicken the pace of the evolution of the OTT (over-the-top) category, which is still nascent,” said its chief executive officer Peter G. Bithos (pic).

“Our mission ​has always been to drive the entertainment revolution exclusively for the emerging market customer. We are happy that a large player like Netflix is now seeing the same opportunity we have seen,” he told Digital News Asia (DNA) via email.

Hooq is a joint-venture between Singapore Telecommunications Ltd (Singtel), Sony Pictures Television and Warner Bros Entertainment, and has rolled out its service to the Philippines, Thailand and India, with Indonesia next on the cards.

Meanwhile iflix, launched last year by Kuala Lumpur-based Internet investment company Catcha Group, has rolled out in Malaysia, the Philippines and Thailand, and is also eyeing Indonesia next.

“The announcement by Netflix is great news from an industry perspective. It reaffirms that the entertainment consumption shift towards an on-demand model is a global phenomenon,” said Azran Osman-Rani, iflix Malaysia chief executive officer and iflix Group chief operating officer.

“For consumers, it is great that at least a subset of Netflix-branded content is now legally available without a VPN (virtual private network),” he said via email.

The Netflix announcement came at the Consumer Electronics Show (CES 2016) in Las Vegas on Jan 6, where cofounder and chief executive Reed Hastings (pic below) said, “Today you are witnessing the birth of a new global Internet TV network.

“With this launch, consumers around the world – from Singapore to St Petersburg, from San Francisco to Sao Paulo – will be able to enjoy TV shows and movies simultaneously,” he said.

“With the help of the Internet, we are putting power in consumers’ hands to watch whenever, wherever and on whatever device,” he said. The expanded service is already live. In a statement, Netflix said that for one monthly price, members around the world will be able to enjoy Netflix original series such as Marvel’s Daredevil and Marvel’s Jessica Jones, as well as a catalogue of licensed TV shows and movies.

In 2016, the company plans to release 31 new and returning original series, two dozen original feature films and documentaries, a wide range of stand-up comedy specials, and 30 original kids series, available at the same time to members everywhere, it said.

DNA has requested additional information from Netflix, but it had yet to respond as at press time because of the time-zone difference. 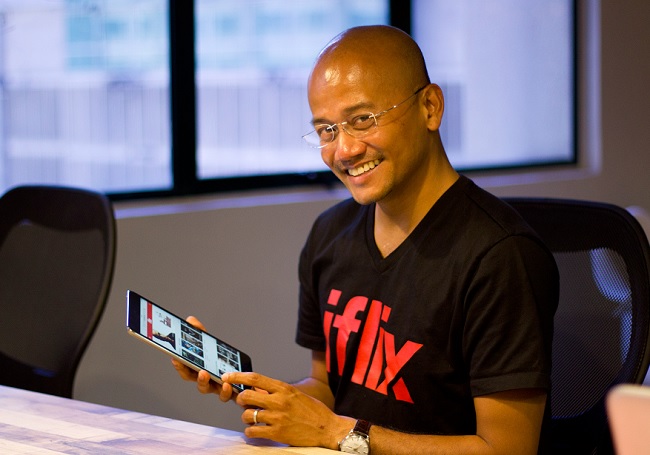 Both Hooq and iflix believe that the Netflix entry not only validates their VOD/ OTT play, but that they have a different value proposition that is especially suited for emerging markets.

“From an iflix perspective, we are obsessively focused on the unique challenges of emerging markets – whether it be pricing, payments, infrastructure challenges, cultural preferences, or local programming and languages,” said Azran (pic above).

“We will continue to provide the broadest and most relevant selection of content for local consumers, at a price that everyone can afford,” he added.

In a discussion prior to the Netflix announcement, DNA had also asked Azran about competing against big players like the US company, and he said iflix’s edge would be in the quality of its offering.

“There are many things that we believe will set us apart as the emerging markets specialist. We will win only if we can convince customers that we are the most affordable service – and that comes from having the leanest cost structure and operating model,” he said.

“Next would be having a reliable service that works – even with the patchy Internet connectivity and common in emerging markets.

“We’ve build a product that can stream even at 1Mbps 3G mobile Internet speeds with minimal buffering, and have added features like Download-Watch Offline for consumers to better manage their data quota and still use iflix even when there is no Internet connection,” he added.

Finally, key to the iflix game-plan would be telco partnerships, such as the ones it has established with Digi Telecommunications and Telekom Malaysia in its home market, and PLDT in the Philippines.

“Telco partnerships are hard work, but once we win their confidence and are able to deliver great value to our telco partners to help them increase customer ARPU (average revenue per user) and data usage, while improving churn through a ‘sticky’ subscription video service, we’ll be a service that is very hard to dislodge,” said Azran.

Meanwhile, when asked what Hooq plans to do in the wake of the Netflix announcement, Bithos said, “Our strategy remains the same.”

“We believe a ‘one size fits all’ approach will not meet the needs of everyone in emerging markets. To address the emerging market customer, pricing, content, payment methods and many other factors must be tailored – market by market,” he said.

“It is this combination which our target customers require. For them, local content is equal if not more important than just Hollywood,” Bithos added.