‘Staggering number’ of Malaysians unhappy at their jobs: JobStreet survey

A STAGGERING 74% of respondents in a recent JobStreet.com survey on Employees’ Job Satisfaction in Malaysia said they were not satisfied with their current jobs.

However, this was a slight improvement from the 78% who expressed similar sentiments in a survey conducted in September 2012, JobStreet.com said in a statement.

Despite the four-percentage-point improvement, the number of dissatisfied employees is still high, the online recruitment company added.

However, it must be noted that only 631 employees took part in the Job Satisfaction Survey that was conducted by JobStreet.com.

Salaries are often perceived as the main factor that influences job satisfaction. However, only 11% of the respondents disclosed that their salaries were a compelling factor in their job dissatisfaction.

A majority (71%) said that the main cause for their dissatisfaction is the poor quality of leadership or management in companies.

The disturbing matter, however, is that more than half of these discontented employees include senior executives and managers, JobStreet.com said. When asked about their opinion in terms of salary, 61% of the total respondents felt that their salaries were low or not enough to survive with. On the other hand, 37% of the respondents said that they are getting reasonable wages from their companies. From the 74% of respondents who are not satisfied with their jobs, 57% of them intend to leave their current job in less than a year. Some 32% of these unhappy employees plan to leave within the next three years.

Hence, these results suggest that 89% of these unhappy employees could leave their companies in less than three years, something employers should be mindful of, JobStreet.com said.

How long will unhappy employees stay in the company? 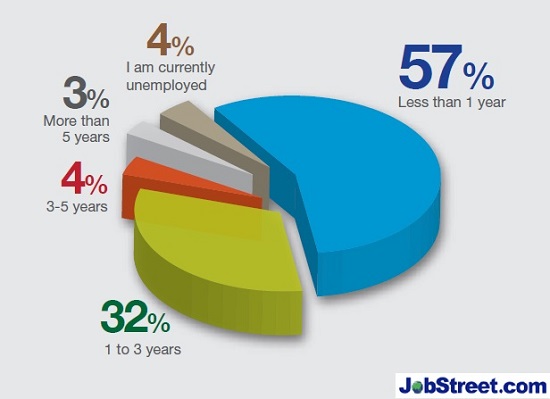 JobStreet.com operates in Malaysia, Singapore, the Philippines, Indonesia and Vietnam. It says it currently services over 230,000 corporate customers and has over 15 million jobseekers in its database.

Wooing talents to your startup, and Employee #1