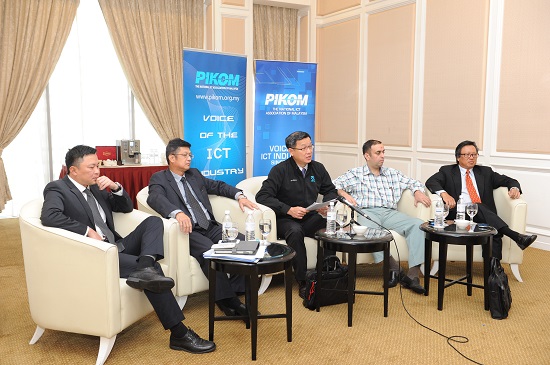 THE National ICT Association of Malaysia (Pikom), whose members currently comprise ICT-related companies and organisations, will allow individuals to become members sometime next year, as part of its move to play a bigger role in the industry.

According to Pikom chairman Cheah Kok Hoong, there are more than 400,000 ICT professionals in the country and there is little engagement among them.

“This is a great platform for individual ICT professionals to gather and share ideas among each other.

“We strongly encourage fresh graduates to join us so they can get a better understanding of the industry, as well as to equip themselves with the skills in demand,” he said after Pikom’s annual general meeting on Oct 21 in Petaling Jaya.

Pikom deputy chairman C.S. Chin said the association has submitted the necessary application to allow individual membership to the Registrar of Societies (RoS), and is currently awaiting approval.

For Budget 2015, Pikom said it had been hoping that the Malaysian Government would announce an exemption for ICT products when the Goods and Services Tax (GST) comes into effect in the country next April.

It had also been hoping for plans to make broadband rates in Malaysia more competitive. While the Government did announce plans to roll out more broadband access – 1,000 more telecommunications towers and a new subsea cable system – there was no announcement on reducing rates.

“One thing good about us (Pikom) is that we never give up. We will continue to try until we succeed,” said Cheah.

He said that the association’s next step would be to have dialogue sessions with the relevant authorities so that it can better explain its recommendations.

“We have already scheduled some meetings, closed-door dialogues, with the relevant authorities,” he said.

Pikom also plans to submit its recommendations and proposals for the upcoming 11th Malaysia Plan, the latest in a series of five-year national development plans, which will be unveiled next year.

“We will work closely with [national ICT custodian] Multimedia Development Corp, [industry regulator] the Malaysian Communications and Multimedia Commission (MCMC), and other relevant authorities,” he added.

Come April 2015, Malaysia will begin implementation of the GST. Once the new tax regime kicks in, it is expected that ICT products and services may see a price increase – which may result in lower demand.

Cheah (pic) believes that this would only be a short-term scenario. “I think there will be a knee-jerk effect, but I believe that as long as the economy is growing at 4-5% or more, there will be growth opportunities for the ICT sector,” he said.

Some of the areas he expect to see grow are after-sales services and support for GST-enabled ICT solutions, cloud computing and mobile computing, analytics, and also hardware.

“Let’s not forget that companies and organisations need to do a technology refresh once every three to five years ….

“Therefore I am quite optimistic about the ICT sector and believe that it would still be able to hit our RM95-billion revenue target by 2017,” he said.

In February last year, Pikom unveiled a five-year plan to create world-class Malaysian players, projecting that annual industry revenue based on transactions would hit RM95 billion (US$31 billion) by 2017.

That projection is based on a CAGR (compound annual growth rate) of 10%, the association had said.

“Woon brings with him over 28 years of experience in various fields such as ICT, business development and management, corporate affairs, branding, advertising and marketing to name a few,” said Cheah.

“With his extensive and well-rounded experience in the industry, I believe that he would lead the association to continue creating greater value for our members,” he added.

In this role, Woon will champion Pikom’s mission to be the ‘Voice of the ICT industry’ and head the management of the association, according to the association.

“He will play a critical role in the day-to-day operations such as enhancing our relationship with our stakeholders, upholding the interest of our members, as well as providing his foresights on gearing Pikom to achieve greater heights,” said Cheah.

He said the CEO role is similar to that of ‘president,’ a position which has been left vacant. “We renamed the position to CEO so that it will cause less confusion,” he added.