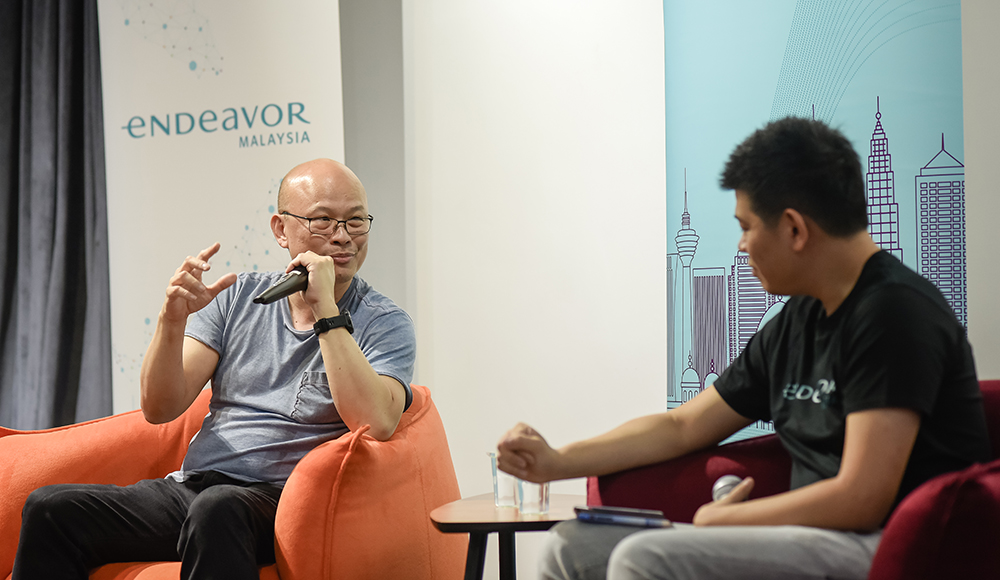 THE story of serial entrepreneur, Peng Tsin Ong, is definitely one with a difference. To briefly provide some background, Peng founded Match.com (an online dating site), Interwoven (content management solutions company) and Encentuate (software product) which collectively makes over US$1 billion in revenue. Today, Peng is managing partner at Monk’s Hill Ventures targeting startups in Asia.

At the third instalment of Scaleup Stories by Endeavor Malaysia, Peng engaged in a fireside chat led by CEO of Photobook Worldwide, Leow Wee Jonn, to share his tales of success and decision-making throughout the years. While his entrepreneurial narrative may bear similarities to that of others, he delves deeper to give a multi-dimensional perspective into his character, mindset and spirit.

The session begins with an open-ended and seemingly straightforward question – “Who is Peng?” - the answer to which slowly unfurls throughout the session. He begins simply, “I was born in Singapore and grew up there. After the army in Singapore, I left for the USA to study.”

Driven by intrigue with entrepreneurs like Bill Gates and Steve Jobs, Peng specifically opted to go to the US. “They were really shaking up the world,” he says. Describing himself as a “geek”, Peng says he took a cue from these entrepreneurs, thinking to himself, “Okay, geeks can do things and build companies.”

“So I decided to try and do that and basically ended up spending 18 years in the US building companies. But at some point, I realised this part of the world is home and came back,” he adds.

Lessons from a father

The entrepreneurial mindset or founder’s spirit is an intangible quality many struggle to put their finger on. It refers to persistence, drive and know-how but also the ability to know when to draw back and reassess directions. Listening to Peng’s story, however, gives one a clearer sense of what it takes to become an entrepreneur and perhaps even, how early on this “X factor” is ingrained.

Peng says his dad never had a job but always managed to provide for the family, “Sometimes it was hard but we never went hungry. This gave me lots of confidence that I could always find means to put food on the table when needed.”

Being a tech-inclined person with an engineering background and emulating his father’s entrepreneurial drive, Peng believes he’s had the best of both worlds. “It made me realise that if I’m willing to use my mind, work hard and push myself, I would figure it out,” he adds.

In a world where most people view entrepreneurship with trepidation and often choose a career as a safer option, Peng’s ideals are a stark contrast. “I thought I was being very conservative by doing startups,” he says.

He shares his philosophy and urges people to think about what risk is: “The one thing you don’t get back is time. It is more risky to have an uneducational year being bored versus trying a lot of things, meeting new people and doing something great. You may blow a hole in the ground but you would have learnt something.”

Three times is the charm

“Half of us founders have the idea first, and the rest of us just know we wanna build a startup,” Peng says, adding that he met people and tried around 50 different ideas on his notebook before starting Match.com.

Interestingly, Peng did not start off with the idea for an online dating site. “We were trying to build a sort of verticalised Ebay or Craigslist in 1993. We thought it was ridiculous that we had to go through newspapers to find classified ads. So we tried to get the classified ads to go online but that didn’t quite work.”

Sooner or later, this idea evolved into Match.com. “At that point, 90% of internet users were men which was a huge problem. So we just ignored men and we just marketed to women. It worked and the rest is history”

As for his next company, Interwoven, Peng says: ‘I started it not because I thought it was a huge market. I wanted to go public and at that point, we only needed US$20 million to go public compared to billions today.”

Peng’s last company, Encentuate, was founded based on technical interest. “I ended up selling to IBM simply because I thought it would take too much effort to scale and IBM had the sales force to make it big.”

Being a key part of three successful companies to date, Peng was asked how he knew his business ideas were solving problems that could be scaled up. “That’s where I think luck played a part.”

He believes there are huge opportunities within Southeast Asia for entrepreneurs to go after. “Emerging markets are very inefficient in many different sectors such as real estate, education, healthcare, logistics, transportation and areas of finance.”

Knowing when to move on

Peng reveals that he did not have the big picture mapped when he was starting out but instead just thought about what to do in the moment. “For instance, I asked myself what to do with US$50 million in revenue – should I go public? Do I sell the company?”

In the case of Match.com, Peng believes it was the best thing to sell the company especially since the company went through multiple CEOs in the first few years. As for Interwoven, there were more options. “We could go public, we could have sold the company or I could have continued operating the company.”

However, for personal reasons, Peng moved back to Singapore. “The company stayed public on Nasdaq for almost 10 years. In the end, it was sold but by then I did not have shares in the company anymore.”

Speaking of his third venture, Encentuate, Peng explains what prompted him to sell to IBM. “It was the realisation that it would take me a long time to build up a significant business and revenues if I were to do it organically. The business was not fast moving. So I decided, the best way to unlock the value of the company was to find a home for it in a big company.”

As such, there is no secret formula or pre-planning to Peng’s success. “It was just practical decision-making as I went along. I was rolling with the punches.”

In hindsight, Peng has advice to offer his younger self. “It is really, really hard to build companies. Every time you start from zero, it is a slog to get up to some level. Instead of doing that, it would be best to build one company and the next one on top of it. All the big companies are built that way.”

Like any other success story, Peng’s is not without its fair share of challenges. He says some of the most difficult decisions he had to make involved people. “Some of my best days in my life are around people and startups but so are some of the worst.”

He talks about difficulties and some of the toughest calls he had to make. “It was hard was laying off 400 people when a lot of them were friends, realising the CEO I brought in could not be trusted, or having the engineering team threaten to leave if the head of department was not fired.”

Nonetheless, Peng kept his head above water and remained positive. “In the big picture, it doesn’t really matter. It is not a matter of life and death. We just make these decisions and move on with it.” While it might feel bad, Peng believes there are lessons to reap from these situations.

Peng also talks about friendships breaking up because of soured business relationships. “Sometimes it’s okay because the friendship is not worth anything. But in strong friendships, you need to figure out what’s important.”

It is not often that businessmen hold this perspective: “I am not one to say preserve the viability of the company at all costs. At some point, it might not make sense anymore and you may want to stop doing it.”

Switching gears from entrepreneur to investor

There are two things that Peng finds very engaging. One is playing around with ideas that create an impact whether as a founder or investor. Secondly, Peng reveals: “Another thing that I like, but didn’t know I liked, was helping people grow.”

He shares a past experience: “One of the best days of my life professionally was during one of our IPO parties when spouses and family members came up to me and thanked me.” This opened Peng’s eyes to a bigger realisation beyond product and market. “I didn’t realise the amount of impact that you can have on the people you work with.”

As an investor, Peng may have found his sweet spot. “Being a VC is great because I get to try all these crazy ideas and meet all sorts of people who want to change the world in their own way. I get to engage with people and discuss how to create value.”