As people become more connected, security and authentication have taken on a new dimension, and banks looking to transition to the new digital banking reality are increasingly opting for biometric authentication to make it easier for consumers, and more secure for all parties.

In July, Malaysia’s largest bank, Maybank, rolled out a biometric feature for its banking app, allowing users to check their balance and access their accounts using fingerprint scans.

Hong Leong Connect was first rolled out in 2011, designed to cater to its core domestic market in Malaysia, as well as other markets such as Cambodia, China, Hong Kong, Singapore and Vietnam.

“Yes, we know that there are mobile banking apps with biometric authentication, but those are just for customers to check their balance,” said Hong Leong Islamic Bank (HLISB) managing director and chief executive officer Raja Teh Maimunah.

“We are the first one to allow customers to not only check their balance, but to also conduct transactions.

“We strive to lead in the field of digital banking technology to provide our customers with the convenience of banking at their fingertips,” she told a press conference in Kuala Lumpur on Oct 9.

Customers using smartphone models without biometric scanning abilities can continue to log on to the Hong Leong Connect portal.

With this, “HLB expects a 32% growth in its total of 700,000 active digital banking users, supported by a 72% increase in new user registration for Hong Leong Connect Online,” said Maimunah.

“Users and downloads of the Hong Leong Connect mobile app are expected to grow by 42%, all by the end of 2016,” she added.

Maimunah said HLB’s definition of active users is those who log on to use Hong Leong Connect at least once a month. HLB also hopes to facilitate entrepreneurship through Hong Leong Connect, according to Maimunah, adding that there are many traditional entrepreneurs in Malaysia who are still not digital-savvy.

“We want to create a digital ecosystem but how? Many of them [entrepreneurs] don’t have PayPal accounts, nor do they have MasterCard solutions.

“But many of them own a smartphone or a tablet. And that’s where Hong Leong Connect comes in – we are trying to convert these traditional entrepreneurs into digital merchants,” she said.

With Hong Leong Connect, merchants do not have to physically deposit their earnings at the end of every business day at the bank or a cash deposit machine.

“With the app, the money would go straight into your account,” Maimunah said.

Also, merchants no longer have to rent a credit card terminal, nor do they have to pay any merchant fees as all transactions can be done via a smartphone or tablet. The money collected upon payment flows directly from the customer’s account into the merchant’s account, she said.

“Unlike with credit card payments, you don’t have to wait till the batch settlement time. Isn’t this as good as cash?” she said. HLB is intent on leading in the digital banking space, which is becoming the new normal for banking in any case.

PEx is one of Hong Leong Connect’s prominent features, an award-winning P2P mobile money transfer service that allows users to transfer money to anyone using the recipient’s mobile phone number – regardless of whether the recipient has an HLB account or not.

PEx+ functions as an e-wallet that facilitates cashless and cardless transactions.

HLB is also working on building e-commerce features into its banking app, which should be rolled out within the next 12 months.

“(Hong Leong) Connect is not a product, it is a lifestyle proposition. And that is how we differentiate ourselves from other banks,” Maimunah declared.

HLBB to use Intellect to ramp up wholesale banking services 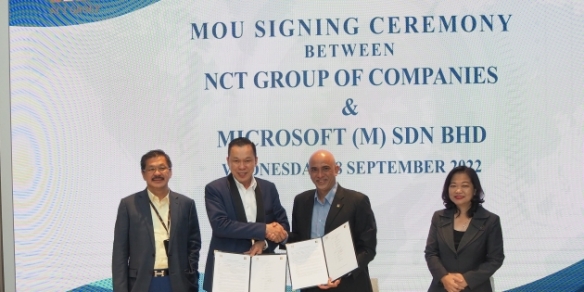