THE global average connection speed continued to improve, with a quarterly increase of 5.5% to reach 3.8 Mbps, according to the Fourth Quarter, 2013 State of the Internet Report released recently by Akamai Technologies Inc.

But even with this improvement, half of the countries/ regions listed among the top 10 in global average connection speeds – including the top four countries/regions – actually saw nominal declines quarter-over-quarter, ranging from a loss of 0.7% in the Netherlands to a drop of 6.7% in Latvia.

Based on data gathered from the Akamai Intelligent Platform, the report provides insight into key global statistics such as network connectivity and connection speeds, attack traffic, broadband trends and availability, and IPv6 adoption.

Overall, 133 qualifying countries/regions ended the year with higher average connection speeds than the year before, contributing to an increase of 27% from the end of 2012.

Both South Korea and Ireland experienced year-over-year growth of more than 50%, at 57% and 59%, respectively. The smallest yearly increase among the top 10 was seen in Latvia, which added 11% during the course of 2013.

Global average peak connection speeds recovered from a small decline in the third quarter of 2013 with impressive improvement of 30% to 23.2 Mbps in the fourth quarter, Akamai said.

A total of 138 qualifying countries/regions – and all of the top 10 – experienced higher average peak connection speeds than in the third quarter, with increases ranging from 1.3% in South Korea to 179% in Libya, which improved to 15.8 Mbps.

Hong Kong and South Korea boast the highest average peak connection speeds and remain the only two countries/regions above 60 Mbps, at 68 Mbps and 64.4 Mbps, respectively.

Year over year, the global average peak connection speeds increased 38% compared to the fourth quarter of 2012.

Global high broadband (>10 Mbps) adoption rates in the fourth quarter slowed from previous, double-digit percentage growth to a quarterly increase of 1.6%, staying at 19%.

Year-over-year improvement was strong, however, with the global high broadband adoption rate increasing by 56% from the fourth quarter of 2012, the company said.

Quarter-over-quarter, the global broadband adoption rate grew 4.3%, with 55% of all connections to Akamai taking place at speeds of 4 Mbps or above. South Korea and Switzerland topped the list at 94% and 91% adoption, respectively.

“We’ve reached a significant milestone in the improvement of average connection speeds,” said David Belson, editor of the State of the Internet Report.

“The fact that all of the top 10 countries/ regions’ average connection speeds are now at or exceeding the high broadband threshold – and continued strong growth in countries like South Korea and Ireland – is indicative of the progress that’s being made in broadband penetration.

“It’s reasonable to expect these promising trends will continue to be reflected in future reports,” he added.

Akamai maintains a distributed set of unadvertised agents deployed across the Internet to log connection attempts that the company classifies as attack traffic.

Based on the data collected by these agents, it said it is able to identify the top countries from which attack traffic originates, as well as the top ports targeted by these attacks.

It is important to note, however, that the originating country as identified by the source IP address may not represent the nation in which an attacker resides.

During the fourth quarter of 2013, Akamai identified 188 countries/ regions that originated observed attack traffic, which are three more than last quarter.

In contrast to its climb to the top of the list earlier this year, Indonesia’s attack traffic continued to decline in the fourth quarter to nearly one-fourth of its third-quarter attack traffic, falling to 5.7%.

Enterprise and commerce continued to be the industries targeted most frequently by the reported DDoS attacks in the fourth quarter, at 159 and 82 attacks, respectively. Together, they account for just under 70% of the reported attacks during the quarter, while slightly less than half of the total attacks were reported by customers in the Americas.

In the Third Quarter, 2013 State of the Internet Report, Akamai started looking at the likelihood of a company experiencing repeat attacks after an initial DDoS attack. In the third quarter, Akamai reported this as a one in four probability.

In the fourth quarter of 2013, the chance of a repeated attack increased significantly to just over one in three (35%), meaning that 56 of the 162 organisations that were attacked suffered repeated threats throughout the quarter.

As a result, future State of the Internet Reports will include insights using additional observations from Prolexic’s Quarterly DDoS Attack Report. Quarterly growth was also seen in eight of the top 10 countries/regions, with the greatest increase once again seen in Brazil, which added nearly 8% (or approximately 2.7 million IPv4 addresses).

The United States and select European countries continue to lead the world in terms of IPv6 adoption, with Europe again having seven of the top 10 leading countries. Japan and Peru are the only countries from their respective regions to make the top 10 list.

Double-digit percentage growth rates were seen in eight of the top 10 countries, with Peru and Germany seeing the largest increases, at 41% and 43%, respectively. The lowest rate of growth was seen in Romania, which increased by nearly 8% quarter-over-quarter.

Colleges and universities continue to be early adopters of IPv6, with moderate to large quarterly increases in adoption rates seen across most of the top 10. Iowa State, the University of Vienna Austria and the University of Saskatchewan all saw double-digit quarterly percentage increases. 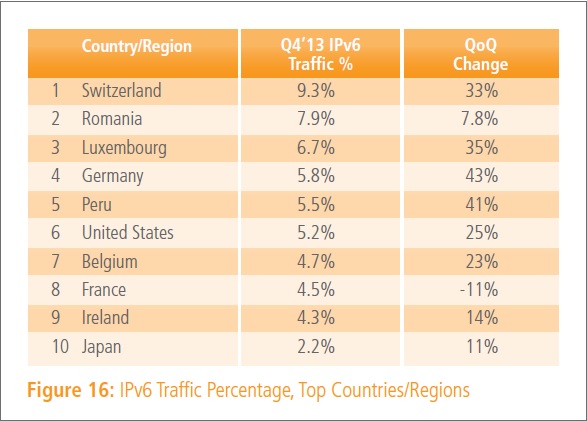 In the fourth quarter of 2013, average connection speeds on surveyed mobile network providers ranged from a high of 8.9 Mbps (Russian mobile provider RU-1) down to a low of 0.6 Mbps (mobile provider ZA-1 in South Africa). The high is down just slightly from the 9.5 Mbps reported in the third quarter of 2013.

Akamai also conducted a fourth-quarter analysis of Akamai IO data to determine which user agents were used most frequently for mobile traffic requests.

Based on data collected from a sample of requests from mobile devices to the Akamai Intelligent Platform over cellular networks, Android Webkit accounted for approximately 35% of requests and Apple Mobile Safari trailed at more than 29% of traffic.

However, for traffic from mobile devices on all networks (not just cellular networks), Apple Mobile Safari was responsible for more than 47% of requests, while Android Webkit drove only 32% of requests.