FREENOM, a free domain name provider controlled by the world’s largest privately-owned domain name system company, OpenTLD BV, expects to double its base of active domains to 60 million by April next year.

Freenom, which was previously known as Freedom Registry, currently has 30 million domain names under its belt, comprising top level domains like .tk, .ml, .ga and .cf.

“By end-2015, we will probably have six to seven partner countries added to our platform,” its chief executive officer Joost Zuurbier said at the launch of the .ml domain in Petaling Jaya on Feb 16.

“During the recently concluded Internet Corporation for Assigned Names and Numbers (ICANN) meeting in Singapore, we concluded another relationship with a new country.

“We can’t reveal the country's name yet, but we hope to roll them out [new domain names] by the beginning of next year, and aim to double the domain names that we currently have by April 2015,” he added.

Zuurbier said he believes that .ml has the right attributes to be successful, just like the .tk domain it manages as well.

That monetisation gambit has paid off, and is contributing up to 20% of Tokelau’s gross domestic product, according to Freenom. (Tokelau has a population of about 1,400).

While most of its domains are free, Freenom does charge for some of its ‘premium’ and ‘exclusive’ domains. It also provides additional services, such as website builder products, for a fee.

The company replaces abandoned websites with advertisements so that when an Internet user visits such a website, he or she does not see an ‘error page’ but one with related advertisements. “Approximately 95% of our domain names are free, but the way our business model works is that as long as 5% of them are generating revenue, we will be sustainable,” said chief operating officer Jeremie Godreche (pic).

Freenom closed US$3 million in Series A funding from a group of investors led by Kima Ventures in 2013. To date, the company has invested US$5 million into its operations.

Zuurbier said that Freenom is starting to show good traction, and he is confident that it will be profitable by the end of next year.

“Now, we are looking at growing the business to new heights. It is a game that we really understand, and with the countries that are coming on board, we are confident that we will be able to grow exponentially,” he declared.

The company believes that the .ml domain will address the needs of Malaysians who find it financially difficult to maintain their own websites.

Malaysian domain registrar MyNIC charges a maximum of RM120 (US$33.50) to register a .my domain, plus renewal fees.

“[We expect] Dot ML to be well received by the country’s 20 million Internet users. The .ml domain is fully localised and is able to represent the Malaysian domain. It is a clear and simple web address which the public can easily remember,” declared Zuurbier.

Dot ML is a privately funded joint venture between Freenom and Agetic, a governmental organisation responsible for infrastructure and communications in Mali.

Dot ML has offices in Kuala Lumpur, Bamako (Mali) and Amsterdam. Zuurbier said that with its management team, experienced staff and multi-redundant backbones in all countries, Dot ML can handle millions of registrations.

“Agetic and the Republic of Mali are pleased to be associated with this venture and are delighted to bring the Dot ML domain to Malaysia,” said Hawa Diakite, a representative from Mali’s Ministry of Technology, Information & Communication.

“Mali has experienced first-hand the positive impact of widely-available free domains. We expect the same for Malaysia.

“Free domains like Dot ML are for everyone, and just as with the Internet in general, enable people to express themselves,” she added.

Meanwhile Godreche said that Freenom expects two to three million .ml domains to be registered in Malaysia over the “next few years.”

“If only 10% of the Internet population in Malaysia signs up to the .ml domain, we will be very close to achieving our target,” he added.

In fact, Zuubier is confident that the .ml domain could one day surpass the .my domain in terms of total registrations.

“It is possible. In Turkey, the .tk domain has surpassed the .tr domain,” he said.

The .ml domain can also be marketed to other markets or countries. “If you look at the ML abbreviation, it can represent many things. For example, we can market it to users in Manila,” said Zuurbier. 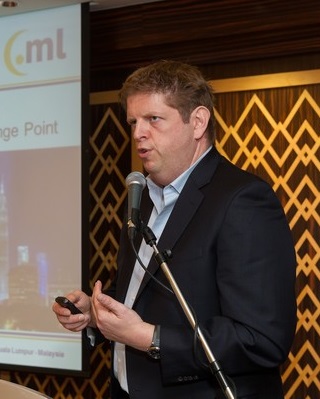 Some people may feel that when something is given for free, chances are there will be people who would want to abuse it.

Zuurbier (pic) accepts this, but said that measures have been put in place to minimise any such abuse.

“If we give something for free and if we can’t immediately take it back when there is abuse, then we will have a big problem,” he said.

He said that because the domains are being given out for free, this gives Freenom more power to remove domains and websites that are being abused.

He said that Freenom is working with various parties, including Facebook, so that they will alert Freenom whenever there is possible abuse of a domain name.