Culture of equality a powerful multiplier of workplace innovation A WORKPLACE culture of equality is a powerful multiplier of innovation and growth, according to new research from Accenture. Published on March 7 in the company’s “Getting to Equal 2019” report, the research found that in Malaysia, employees’ innovation mindset — their willingness and ability to innovate — is nearly five times higher in companies with a robust culture of equality, where everyone can advance and thrive, than in least-equal companies.

“Our research makes it clear that tapping the power of workplace culture is essential to unleashing innovation across the company.”

Most executives around the world (95% of those surveyed) agree that continuous innovation is vital to competitiveness and business viability.

The good news is that the research revealed people across all genders, ages and ethnicities show a stronger innovation mindset in more equal workplace cultures – more than other factors that differentiate organisations such as industry, country, or workforce demographics. Accenture’s new research builds on its report last year, which identified 40 workplace factors that contribute to a culture of equality, and grouped them into three actionable categories: Bold Leadership, Comprehensive Action and Empowering Environment.

For instance, Malaysian employees in robust cultures of equality are six times more likely to say that nothing holds them back from innovating (38%in most equal cultures vs. 6% in least equal cultures). However, organisations must close the important gap the research revealed between C-suite executives and employees. While 76% of executives globally said they empower employees to innovate, only 42% of employees agree.

For example, executives appear to overestimate financial rewards, and underestimate purpose, as motivations for employees to innovate. In a more equal culture, the strongest factors underpinning an innovation mindset include providing relevant skills training, flexible working arrangements and respect for work life balance.

Lee adds, “Everyone from the CFO to the CIO is saying that they want to use tech to innovate – but it’s never just about technology, it’s also about people. As we mark International Women’s Day, it’s an important message for everyone and especially employers, that a culture of equality enables people from all backgrounds to be equally successful.”

While diversity factors alone (e.g., a diverse leadership team and a gender-balanced workforce) significantly impact innovation mindset, a culture of equality is the essential multiplier to help companies maximise innovation.

The research found that innovation mindset of Malaysian employees is nearly seven times greater when diversity is combined with a culture of equality, compared to companies where these are least common. 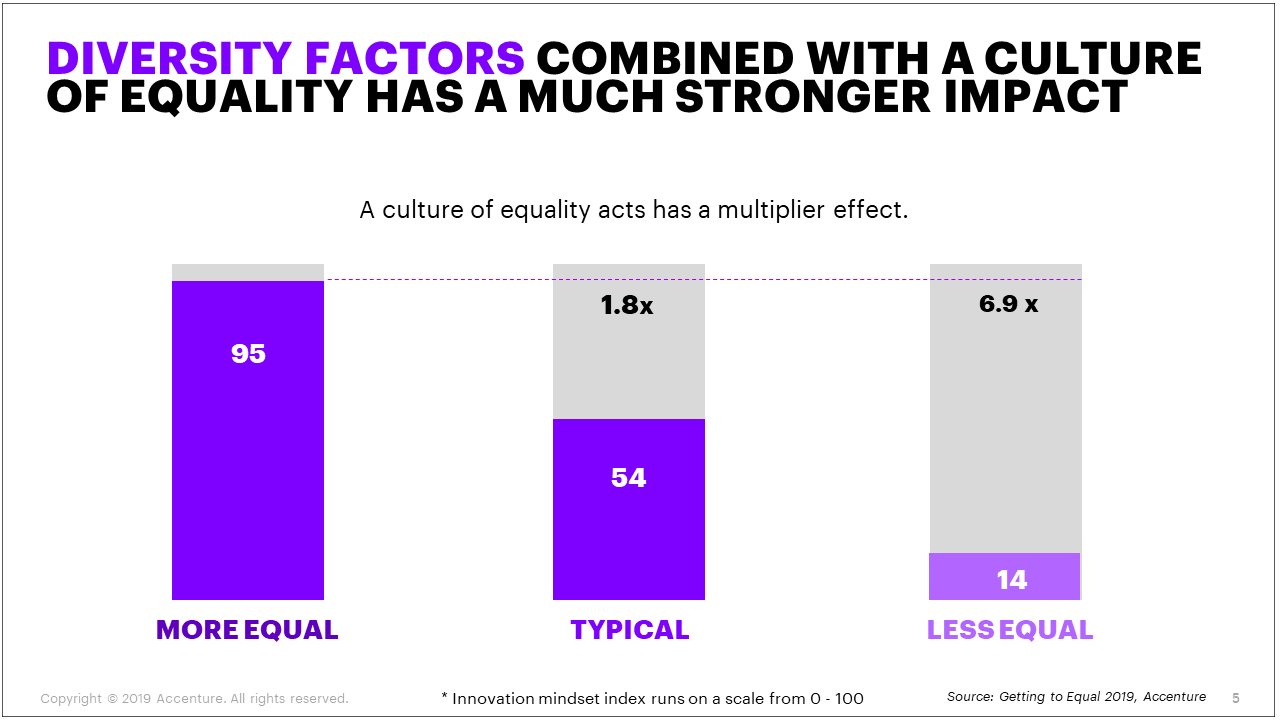 The research found that an innovation mindset is stronger in fast-growing economies and in countries with high labour-productivity growth. The opportunity is enormous: Accenture calculates that global gross domestic product would increase by up to US$8 trillion over 10 years if the innovation mindset in all countries were raised by 10%.

“We are ambitious to dream of a Malaysia reimagined, not in the future, but now, and we need an innovative workforce to achieve it. This is why accelerating equality in the workplace has never been more critical for driving innovation,” said Azwan Baharuddin (pic, right), Accenture’s country managing director, Malaysia.

“If people feel a sense of belonging and are valued by their employers for their unique contributions, perspectives and circumstances, they are more likely to advance and feel empowered to innovate.”

As part of its “Getting to Equal 2019” research, Accenture conducted an online survey of more than 18,000 professionals in 27 countries during October 2018, as well as a phone survey with more than 150 C-level executives in eight countries in November and December 2018.