“BY AND large, the women we talked to say that the mobile phone is one of the tools that helps them shape how they balance their personal lives with their professional lives.

“The mobile phone seems to be less of a leash to the office than we expected. We are seeing well-educated, professional women turn to mobile devices for entertainment, maintaining personal connections, and providing a break from the rigours of their busy lives,” said Dr Erica Gibson, VP of Product Management and User Research, Telenor Group.

“The survey has given us more crystallised and very useful insights into female digital habits and user needs. We wanted to talk to women about this because we know that they hold large stakes in connectivity and access to information and services, which they make clear in this survey,” said Gibson.

The survey was conducted on a sample of 1300 professional women aged 25-40 in Scandinavia and Asia (Malaysia, Myanmar, Norway, Singapore, Sweden and Thailand).

This was supplemented by in-depth interviews with women in Norway, Singapore and Thailand. The markets surveyed represent a range of economies, socio-political systems, stages of industrial development and mobile penetration.

All six markets share the use of social media, personal messenger apps, music and news as respondents’ most frequent mobile activities.

Between 50%-80% of women in all markets say they use social media apps most out of any other mobile features, despite much talk of social media fatigue. Messaging apps is a close second in most markets, but stands out as the top choice in Singapore.

Reading news is highly ranked in Norway and Myanmar, and listening to music is Sweden and Singapore’s third highest activity. Despite the popularity of wifi-calling, women in Malaysia and Myanmar highlight personal phone calls in their three most frequent mobile activities.

Interestingly, when looking at top mobile activities, the survey found that the degrees to which the personal supersedes the professional on mobile phones shifts as you head from West to East.

In Norway and Sweden, women list work among their least frequent mobile uses, and try to completely shut out the office in the evening.

Women in Southeast Asia allow work to percolate through more of their personal time. Women in Thailand and Myanmar, however, both list work-related messaging and phone calls as fourth and sixth most frequent activities. 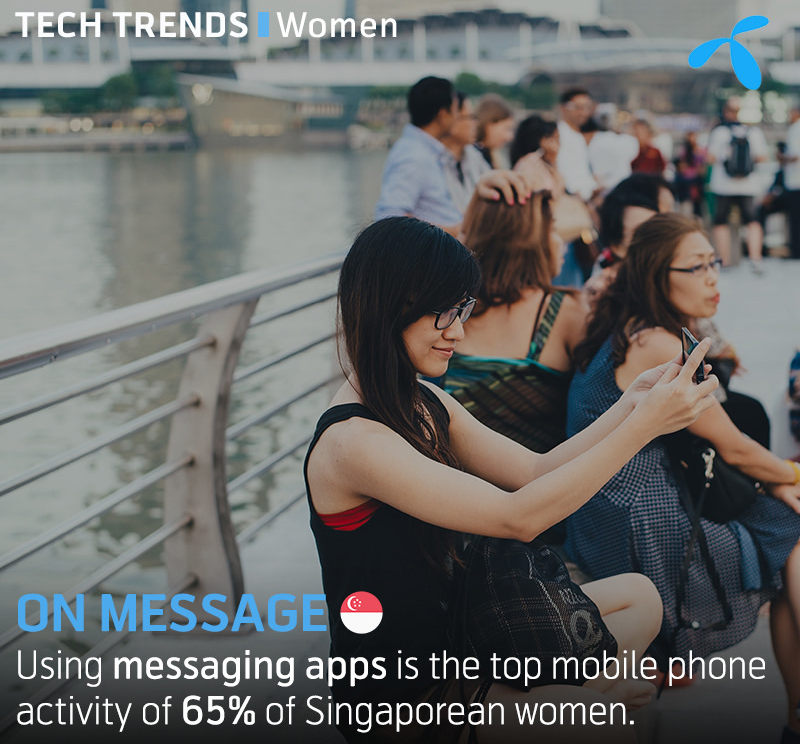 Most common emotions when using the mobile

When it comes to feelings associated with mobile usage, women in all six markets were aligned in feeling “entertained” and “connected to the world” when using their mobiles. Interestingly for the third choice, Swedish women say they felt “addicted” while Myanmar women report being “optimistic”.

Malaysia, Norway, Singapore and Thailand all share feeling “relaxed” while on their mobile. Feelings such as “depressed”, “stressed”, “overwhelmed”, and “exposed” were least frequently identified across the board.

Mobile activities in the evening - and if waking up at night

To shed light on what happens after office hours, respondents were also asked about their last three mobile activities before bedtime and in the middle of the night. Social media came in first across the board, but subsequent options vary greatly.

Ten percent of Swedes cite a midnight online shopping habit. Women in Norway and Myanmar read news as a primary before-bed activity, though in Norway, one in five admits that “news” shifts to “reading gossip and tabloids” as the night wears on.

Not allowed before bed or in the middle of the night are work activities – the least frequent undertakings mentioned by women in all markets.

Next page: A female-only internet anyone?