MANY agencies in charge of city development around the world are working blind, making decisions without the ability to see the impact these decisions have on the complex and dynamic ecosystem of a city.

“That is the reality of how they work and the reason is because it’s so complex, with issues ranging from energy and waste management, to space utilisation and even the lifecycle management of buildings,” said Dassault Systèmes president and chief executive officer Bernard Charlès (pic above).

“And most of the assets to plan the lifecycle of a city is very poorly documented, and with poor maps – some digitised, others not – there is no holistic approach to city management or planning,” he told told a recent media briefing in Singapore.

Enabling that forms the core mission of Dassault Systèmes with its involvement in Virtual Singapore, a S$73-million (US$53.4-million) research and development programme which was launched in December 2014, and led by the National Research Foundation (NRF).

The Virtual Singapore goal is to create an intelligent information platform that will be used by the Lion City’s citizens, businesses, government and research community to solve emerging and complex urbanisation challenges.

Virtual Singapore is part of the Smart Nation initiative, whose focuses include optimising urban spaces and enabling better city planning by leveraging on technology.

Expected to be completed by 2018, the Virtual Singapore programme will deploy Dassault Systèmes’ 3DEXPERIENCity platform to create a dynamic, 3D digital model of the city and connect all stakeholders in a secured and controlled environment.

The Singapore Land Authority (SLA) is providing 3D topographical mapping data and will own and operate the project once it is, while the Infocomm Development Authority of Singapore (IDA) is providing information and communications technology expertise. 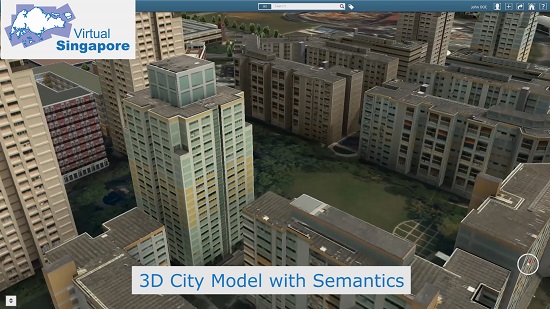 Calling it the process of building Singapore’s ‘digital twin’ – or the “digital definition of what’s happening in the reality’ – Charlès said Dassault Systèmes’ has been in the business of helping build such digital entities for many years.

“For the last 30 years, Dassault has been creating ‘digital twins’ for many industries, beginning with aerospace.

“It’s not a question of viewing but understanding. And it’s a question of collaborative work so you can predict the decisions that are going to be made,” he said.

Virtual Singapore is intended to be a showcase of what is possible using the company’s 3D platform and the role of a ‘digital twin’ used in 3D modelling simulation collaboration scenarios.

“Having been deployed for complex industry solutions from aerospace to biotech, we’re saying that it is now possible to apply this approach to an entire city,” said Charlès.

“A city is no longer a ‘flat thing’ – it is multi-dimensional organism and incorporates space and time. If you look at multi-modal transportation for example, a system cannot be effectively put in place without a true 3D definition of the city,” he added.

Charlès said that questions for creating digital twins of cities centre on three key issues: Is it feasible? Is it expensive? Where do we start?

Much has been said about the benefits of big data in urban planning and smart city management, but the fact is, its potential can’t truly be harnessed without a reference point and, more importantly, context.

“When it comes to big data and cities, the problem is, you don’t know what to do with it. You can’t use it if you don’t put in … the real context of a city to understand.

“With Virtual Singapore, agencies can use a ‘master model’ to put things into context, to leverage their sets of existing information to evaluate the impact of any changes such as traffic optimisation, planning infrastructure development or risk management,” he said.

Charlès said that access to a 3D model simulation is more than just about visualisation but is about enabling cross-agency collaboration on a common platform, to help arbitrate the impact of new initiatives.

There’s also the potential to expand this to mobile devices to enable new services and offer access to citizens in the decisions shaping how their city develops.

In response to security concerns over sensitive data being handled by a third-party vendor, Charlès said that Singapore will retain ownership and management of its data, and Dassault’s platform only indexes it.

“We have no visibility into the data and it stays where it is. I don’t want any data to be under my control – the one who owns the data should control it,” he said.

“The Virtual Singapore platform is currently an on-premises installation within a Singapore-controlled environment – one day it might be on the cloud and we have the capability to help secure that, but for now it’s not,” he added. Charlès (pic) said that the Virtual Singapore project is now in the experimentation phase of its development, since work began on the project a year ago.

“There are multiple milestones that we need to cross and with the experimentation stage that kicks off this year, there will be trials with small selected groups of citizens to get feedback about what’s valuation information for them.

“It’s not just about learning from agency specialists and their needs, but also ensuring accessibility for citizens for certain decision-making processes and services.

“So we’re at that stage now with experimenting with agencies and select groups of citizens,” he added.

In terms of challenges faced in making Virtual Singapore a viable and thriving tool, Charlès said that dealing with legacy data is one.

“There’s a lot of value in legacy data but there is good data and bad data, and cases where people believe that bad data is good when it’s not. You need to show that some of the legacy data is of poor quality and needs to be rectified.

“Having the open architecture in place so you can use reuse that existing data is one consideration, and the other is having people recognise that data they’re supposed to have, may not be at the quality they require.

“There could be gaps that need to be filled or improved upon. For example, is the height of every building in Singapore known?” he added.

Many government agencies with their own tools, historical habits and processes may also find that making the switching to a less ‘siloed’ and more collaborative approach would be a challenge.

Charlès believes that this is a challenge not specific to Singapore but exists in companies and cities alike.

However, he added that adapting to a new collaborative approach would be easier to execute in Singapore versus other markets.

“It’s related to change management and business transformation. Where goals are good and well-defined, there’s a clear value to solving problems and a new attitude in the commitment of working together and recognising the value of new tools versus legacy ones,” he said.

It’s also about walking the talk, which Charlès noted is the best way to convince people.

“People don’t just believe, they have to see it. Thirty years ago I signed a contract with Boeing with the commitment we could do a US$3-million component, one of the most complex in the world, on a computer without a physical prototype,” he said.

“But people didn’t believe it, so we built a US$12-billion programme to show to the world that it could be done and we did it,” Charlès said.

“We’re at a similar stage now with the Virtual Singapore project and building digital twins of cities. With Singapore, I’m convinced and confident that we can significantly improve how urbanisation is happening,” he added.

Dassault and NRF to take Singapore into the Matrix