THE eureka moment occurred in 1989 when Bernard Charlès was observing his son playing with Lego. The latter had thrown all his blocks on to the floor, before choosing his pieces and proceeding to construct a new creation.

It was then that Charles realised that visually disassembling a product, much like how his son worked with Lego, was a much-needed technique for manufacturers and designers the world over.

At the time, he was working at Dassault Systèmes, a French software company that specialises in the production of 3D design software. The insight above formed part of the inspiration behind the digital mock-up (DMU), which allows design engineers to produce full-blown 3D models of products. Charlès (pic) was appointed president and chief executive officer of Dassault Systèmes in September 1995, and since then, has worked to fulfil his belief that technology should contribute to progress in society.

“He tells us that for every product brand, the mission is not to sell the brand but create a promise to the user, with providing software that goes beyond its function.

“The vision is to develop software with passion and the way to develop that software is to enable the creation of the passion of the user to use that software beyond basic functionality – that’s the user experience we want to deliver,” says Samson Khaou, managing director, Asia Pacific South, for Dassault Systèmes.

A 26-year veteran of the company, Khaou was sharing some insights with Digital News Asia (DNA) in Singapore on the company’s history and core principles.

Dassault began with automotive, aerospace and heavy industries such as construction as its key verticals, and these sectors remain key contributions to the company in terms of revenue, he adds.

Today the company now counts customers from the energy, healthcare, consumer packaging and consumers goods (apparel) sectors in its current business portfolio, and is still expanding into new segments.

“These sectors are important for us and are also interesting, because you have to include the consumer experience. You have to think about how to support not just the product’s creation but the incorporation of the consumer’s experience as well,” says Khaou.

This expansion is most notably encapsulated by the 3DVIA brand formed in 2007, with the mission of democratising 3D technology for use by consumer markets, new media, and non-engineering professional markets.

Asked about how its efforts have fared against Autodesk, a competing American maker of computer-aided design (CAD) software, that has also launched similar offerings aimed at consumer markets along with cloud-based products, Khaou declines to comment, citing company policy.

“We don’t talk about our competitors, we only talk about what we are doing,” he adds.

Asked about the company’s own moves into cloud-based offerings, Khaou notes that the shift to cloud computing was the next new trend in the larger IT picture, following on from the 1970s' mainframe movement and the desktop era of the 1990s.

“There have been requests from industry to be able to minimise IT infrastructure with cloud-based offerings as a trend.

“However we do not follow the trend in how we develop software; that would only end up being a survival game. What has driven our transformation over the last five years is the desire to not create products but experiences,” he declares.

According to Khaou, Dassault wanted to create a platform which could incorporate that user experience, to build products and simulations with social collaboration tools and enable companies to retrieve market and consumer sentiment to more accurately define the needs of a new product.

This rethink of how the company serves the market was launched in late 2013, with the introduction of its new logo and 3DExperience platform.

The new logo is meant to evoke a compass and represent a different way of carrying out product development, which the company envisions as a more collaborative and cross-departmental process.

The 3D virtual model is no longer the centrepiece of the development cycle. Instead, all aspects of a product definition are intended to be captured, stored, shared, implemented and validated from requirements to commentary around the concept, to simulation results.

“What we wanted to create with this platform is to be able to give the openness for any third party, from business to developer, to put their own apps on it. When you go to cloud, it’s not about having an offering that can be successful but about how you can provide a platform that can host all the content and community-based work and collaboration.

“That’s the reason why we’ve opted to proceed slowly with our cloud product release cycle, as we believe a cloud offering should come with a platform that has relevant content for the community to drive its expansion,” says Khaou.

In terms of regional performance, Europe remains the company's largest contributor with revenue of €243.9 million, followed by the Americas (€165.4 million) and Asia (€152.8 million).

During the third quarter, Asia revenue rose 12% to €152.8 million. However, after eliminating the effect of changes in currency values, Asia actually registered a growth of 22%, making it the fastest growing region in the third quarter.

For the nine-month period, the group registered revenue of €1.62 billion, representing a growth of 8% against the same period a year ago. During this time, Asia registered 2% growth to €425.8 million. Under constant currencies calculation, Asia would have registered a growth of 14%.

“Our revenue results demonstrated solid demand across our largest brands. We were particularly pleased with the sharply higher new licence revenue growth for both Catia and Enovia, in the quarter as well as year-to-date on a constant currency basis.

“Turning to our objectives, despite the more difficult economic environment, notably in Europe, we reaffirm our financial objectives and update them for the inclusion of the recently closed Quintiq acquisition and currency exchange rate assumptions,” he added. 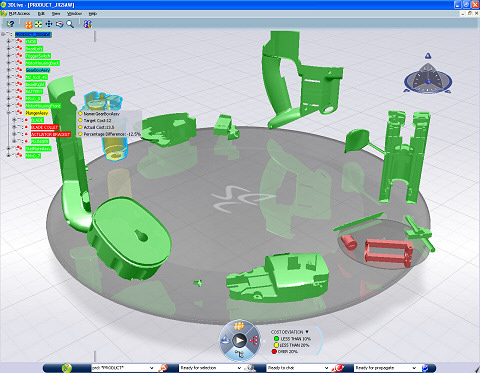 According to research firm Companies and Markets, the global 3D CAD (computer-aided design) market is projected to reach US$7.1 billion by 2018, primarily driven by falling prices of entry-level 3D CAD packages, rapid adoption of the technology among small and medium businesses (SMBs), and the growing need among manufacturing companies to leverage faster time-to-market competencies.

The firm notes that given that “most of the critical, high impact changes are made only in late stage product development, the most important advantage offered is the flexible modelling agility that provides the power to make late-stage design changes.”

This will be driven by increased outsourcing of ODM (original design manufacturing) activities to Asia and the resulting increase in the number of low-cost manufacturing and designing companies in the region, which is expected to push up investments in CAD software, thereby driving opportunities for 3D CAD.

The firm added that the massive shifting of manufacturing bases into Asia such as in India, China and Singapore, propelled further by fears over natural calamities like earthquakes and tsunamis in Japan, “has and will continue to drive demand” for CAD systems including 3D CAD.