She revealed that around 36,000 Malaysian LinkedIn members reside overseas (see map below), with slightly more than 20% living in Singapore, and just under 10% in the United States. The 36,000 were identified as Malaysian based on the fact that they went to secondary school in the country. Roza suggested employers do not overlook this talent niche.

Almost 40% of LinkedIn’s 25 billion pageviews a month comes through smartphones, she said. The traffic comes from its database of 313 million users.

With smartphone penetration rising above 30% in Malaysia, this mobile trajectory is expected to jump. As a result, Roza urged employers to have a clear mobile strategy with which to target talent.

Malaysia has over one million LinkedIn account holders, as does Singapore. [Singapore figure corrected]

While there are four key activities Malaysia engage on LinkedIn, the most popular is for professional insight with 51% using it to stay on top of news and trends in their industry, while 39% use it to connect with other professionals, according to Roza.

An interesting snippet was a table that revealed the type of jobs that were being lost and gained in Malaysia due to migration. It showed that IT along with Oil & Gas were the two sectors most impacted by migration.

For while two of the Top Five jobs in the category of those migrating into the country are Java Programmers and Software Engineering Management (for example, project managers, software architects and team leads), this was offset by the fact that among the key skills of those migrating from Malaysia, software engineering management, Microsoft .NET Application Development and C/ C++ were three of the top five skills.

This is a sobering reminder to employers here that the best Malaysian tech talent is marketable globally.

For 2013 [year corrected], LinkedIn data showed that the migration of skilled jobs cancelled each other out, with 13,000 executives migrating out and 12,500 migrating in. For those migrating out, Australia, Singapore and the United States were the most popular destinations.

The strong flow of tech talent in and out of the country, together with LinkedIn’s Talent Pool Report on software developers for South-East Asia, shows that the demand for such talent remains strong across markets.

The Talent Pool Report is series of reports produced quarterly by LinkedIn, tapping its expertise and networks.

The South-East Asia software developers report also offers employers tips on where to look for talent in software development. For instance, both the Philippines and Indonesia are considered ‘hidden gems’ by LinkedIn as defined by the availability of talent versus cost.

As for the industries which hire software developers, there is little surprise here with IT & Services, Computer and Software, and Internet leading the way before Banking at No 4.

In terms of where to look for good hires, not surprisingly professional social networks came out as the second best resource after recruitment agencies and ahead of Internet job boards.

Interestingly, print publications and trade journals were listed as the least important of 10 sources in finding good people. 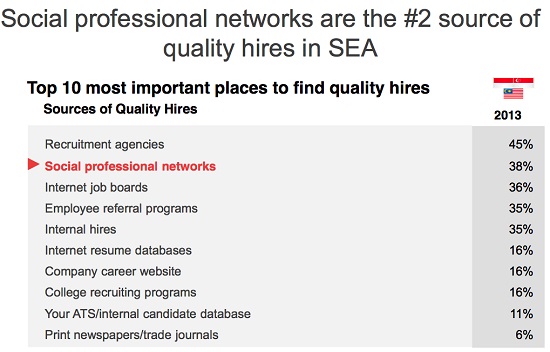 Why you should pay attention to LinkedIn

MDeC to private sector: We’re not your training factory