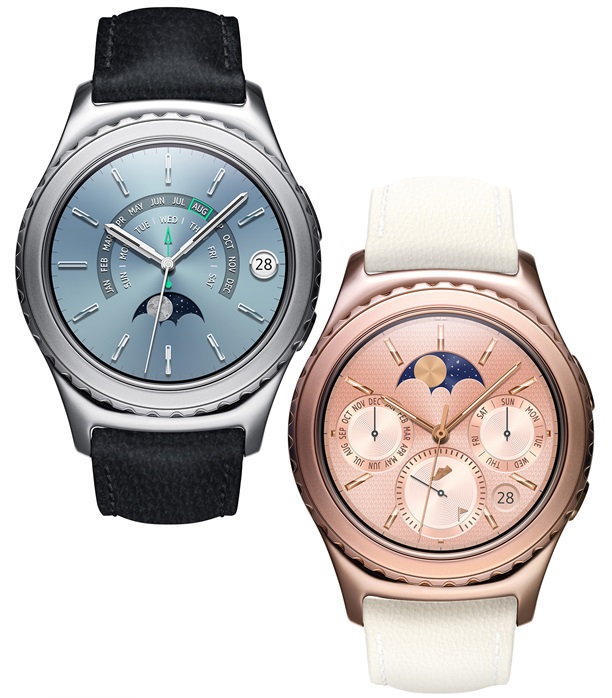 SAMSUNG Electronics Co Ltd unveiled a horde of new or updated products at the annual Consumer Electronics Show (CES) in Las Vegas, including two new editions of the Gear S2 classic, one encased in 18K rose gold and another in platinum.

The new smartwatches offer users diverse options to express and match their style, but also come with added functionality, the company said in a statement.

Samsung said it is openly working with partners to provide more convenience and expanded user capabilities – these include apps from Bloomberg, CNN, eBay, ESPN, Uber and Voxer.

The new Gear S2 classic will include NFC (near-field communications) technology to offer Samsung Pay, which will be available to Gear S2 users early this year starting in the United States.

Samsung is also expanding its line of watch straps and watch face options, and has partnered with exclusive designers, such as Colombo, on premium watch straps for the Gear S2. The new tablet caters to high-efficiency users seeking to maximise their productivity at home, in the office, or on-the-go, the company said.

The tablet delivers full PC functionality with both Windows 10 Home or Windows 10 Pro for business, so that consumers and business users alike can enjoy all the features and functionality of the Windows 10 operating system, as well as compatibility with their existing IT infrastructure.

At 6.3mm and weighing only 693 grams, the Galaxy TabPro S is designed to be easily carried around all day. A full-sized keyboard cover, which comes included with the device, also enhances usability, Samsung declared.

Delivering the very first Super AMOLED display for Windows to the market, the Galaxy TabPro S also features a multitouch screen and a deeper colour contrast with 94% of natural tones to show true-to-life colours and more precise details for a best-in-class viewing experience, it added.

Its battery can fully charge in just 2.5 hours, and offers up to 10.5 hours of battery life for all-day use. It is equipped with the latest generation Intel Core M processor, designed for a fanless 2-in-1 tablet, featuring only 4.5W of power consumption to eliminate noise disruption and maximise efficiency.

The Galaxy TabPro S will be available globally, starting from February 2016. The company also unveiled two additions to its Samsung Notebook 9 series, a 15-inch and 13.3-inch laptops that it claimed are extremely portable and lightweight.

The new Notebook 9 series is ideal for professional and ultra-productive users who are often on the go, Samsung said in its statement.

The full-HD display provides superior brightness with a wide angle and low-reflective screen for a comfortable viewing experience from a variety of positions.