WHILE EMC Corporation’s storage revenue fell short for the first quarter of 2015, it’s full steam ahead for its storage and converged infrastructure solutions, with the company making multiple announcements on additions to, and upgrades across, its portfolio.

EMC reported first quarter earnings of 13 cents a share and 31 cents on a non-GAAP basis. Revenue for the first quarter was US$5.6 billion, up 2% from a year ago. Revenue from information storage products and services in Q1 2015 was US$3.66 billion, down from US$3.68 billion in the same period last year.

Wall Street was looking for first quarter earnings of 36 cents a share on revenue of US$5.74 billion.

READ ALSO: With US$1bil in revenue, XtremIO unleashes ‘The Beast’

In a statement, EMC chief executive officer Joe Tucci said that the company wasn’t “executing as crisply as we had expected,” adding that its strategy was however on track.

That strategy and the company’s ambitions were on full display during the first day of EMC World, its annual conference in Las Vegas, which this year also saw a record attendance of over 14,000 participants from 99 countries.

Speaking to Digital News Asia (DNA), Jeremy Burton, president of Products and Marketing at EMC, said that when it comes to storage strategy, many organisations don’t have clarity into the next five years due to the still-changing technology space.

“Do you go with all-flash, software-defined storage, or a converged infrastructure?” he said.

“What we’ve been doing is spending a lot of time on how we create licences and agreements, especially with a lot of indecision still from organisations on which direction they want to head towards.

“EMC has always had a portfolio play, and we have something called a transformational licence agreement or TLA, where customers pay us but have the ability to be flexible with the option of interchangeable product deployment,” he added. During his keynote address at EMC World, Burton (pic) said that he was fine with EMC cannibalising its own product lines if it meant keeping customers happy.

“Well, if we don’t do it, somebody else will – and it’s a matter of how we approach it. It’s about making it a ‘Team EMC’ win, and not incentivising on revenue for specific products because then your team starts optimising for its division and not its customers.

“You can’t have siloed internal teams fighting for success at the expense of others. It’s one division and one goal, and beneath that, we tell the teams that there is a sweet spot for each product and to identify what that is,” he said when asked to elaborate on this point.

Guy Churchward, president of the Core Technologies Division at EMC, said that the company has been moving rapidly to offer better integration across its portfolio since its reorganisation in late 2014.

While the Core Technologies Division was the result of the merging of its Vmax/ VNX unified storage operation with its Data Protection Division, the Emerging Technologies Division focuses on complementary and non-primary storage products such as ScaleIO, hybrid cloud gateways, HPC (high-performance computing) storage, Isilon and ViPR.

“In the past, one customer commented that ‘the only time your products come together is on a purchase order!’ – and that really showed how we needed to bring out best-of-breed technologies together and focus on outcomes,” said Churchward.

At EMC World, the company announced what it claimed was the most comprehensive converged infrastructure portfolio to accelerate and simplify the customer’s journey to the cloud and big data.

In 2009, EMC and Cisco Systems formed a joint venture called the Virtual Computing Environment Company (VCE), with additional investments from VMware and Intel.

Under the VCE initiative, EMC announced a new family of Hyper-Converged RackScale Systems that it said would enable enterprises and service providers to simplify the deployment of next-generation scale-out mobile, cloud, and distributed Tier 2 (non-mission-critical) applications.

A key release for its Hyper-Converged Infrastructure portfolio, the VxRack System is intended to enable customers to start from dozens of servers and scale out to a maximum of 1,000 nodes, with 38-petabtye capability and 240 million IOPS (Input/ Output Operations Per Second).

“Over the past five years, customers have trusted VCE to enable them to rapidly deploy data centre- scale converged infrastructure so they can focus on delivering next-generation IT services to their businesses,” said VCE chief executive officer Praveen Akkiraju.

VxRack Systems can be ordered in July and will begin shipping in the third quarter, while additional details on the VxRack System based on VMware’s Evo:Rack and VMware Virtual SAN (storage area network) technologies will be previewed at VMworld 2015, scheduled to take place in San Francisco in late August. 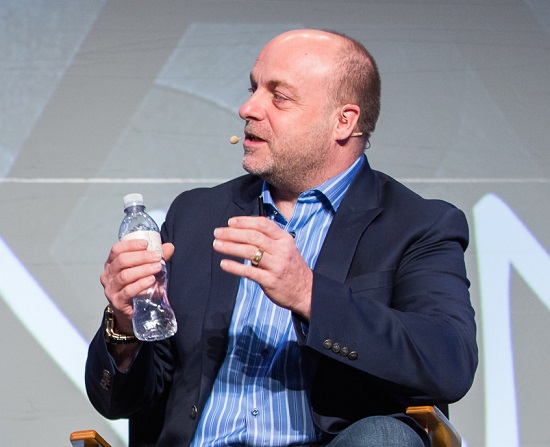 Research firm IDC estimates that EMC has a larger share in the all-flash array market than it has in storage as a whole (35% versus 31%), and its XtremIO business has reached US$1 billion in revenue in just under two years.

“Architecture matters in the storage marketplace, and XtremIO is uniquely architected,” said Churchward (pic, above).

EMC also said it is extending enterprise data services to multiple platforms with the launch of Fast.X, which automates storage tiering across the data centre.

It also launched an expanded set of Vmax3 data services and capabilities that it said further automates, consolidates and protects mission-critical IT operations.

New updates to its Vmax3 data service platform separates software-based data services from the underlying hardware, allowing local replication, remote replication, and storage tiering to be extended to other EMC platforms as well as those from third-party vendors.

Customers can now choose the optimal platform for each workload while consistently protecting and managing them based on their service levels using Vmax capabilities, the company said.

“It might seem like EMC is serving the same kind of workloads with our offerings, but to give you a better sense of the portfolio, I’m going to draw an analogy with cameras,” said Churchward.

“Vmax3 is like a Digital SLR, while XtremIO is like a mirrorless camera, and our Hyper-Converged Infrastructure is the smartphone.

“Now, they all take photographs, but will one replace the other? No, they all have pockets that they serve and it’s about understanding where these pockets are,” he said in his opening keynote.