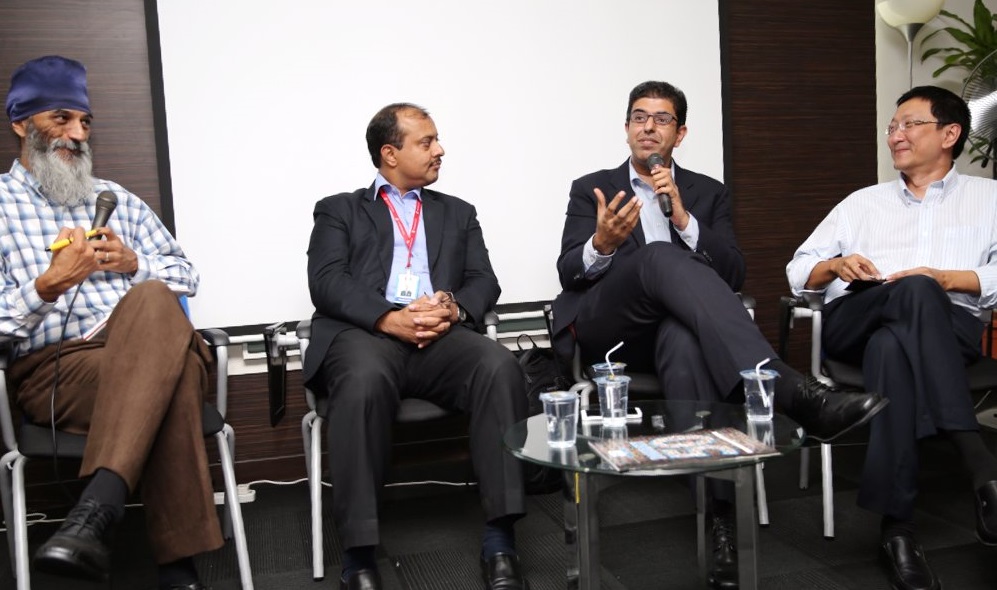 WITH technology becoming so much a part of our everyday personal and professional lives, with its marvels bombarding us through the mass media, with just about everyone on the Internet on social media too – everybody has an idea of what technology can do.

The trouble is, their conceptions of the potential of technology may not be entirely accurate, and that’s where today’s chief information officer (CIO) or his equivalent has to step in.

“This is just my personal opinion – everyone’s a CIO,” said Malik Murad Ali, the IT director at Mydin Mohamed Holdings Bhd, which runs the Mydin chain of hypermarts, as well as shopping malls and a host of minimarts.

Speaking at a DNA-TeAM Disrupt panel discussion themed Meet The Buyers, Malik said that many a time, he has been approached by someone in his company with a great new idea of how technology can help the business.

“That’s because they saw it on television the night before,” he chuckled. “The technology may be available but it may not be feasible, and it’s the job of the CIO to filter that information and determine if it is practical for us. Does it make sense? Is the value there for us?”

Malik was responding to a question from the floor about the changing role of the CIO, and whether today’s CIO is getting the support he needs from the other C-levels.

The Disrupt session on March 26, the 16th in a series of monthly meetups and panel discussions organised by DNA (Digital News Asia) and the Technopreneurs Association of Malaysia (TeAM), was focused primarily on what large technology buyers like Mydin were looking for, and the role that local technology startups and even more established companies could play in filling those needs.

However, today’s technology trends such as mobility, the cloud and even big data have changed what businesses expect from technology, and thus, even the role CIOs play. As a participant put it, the ‘I’ in CIO can now mean ‘innovation,’ ‘inspiration,’ or even ‘investment.’ “How are you preparing for this, essentially a very different job scope from managing the systems in place, to helping to shift the business direction of your company,” he asked.

“It’s an interesting question, and one I’ve been struggling with, actually,” said Malik (pic).

“When I was first hired for my job, it was to fix computers; after that, it was to fix a few thousand computers. Now, yes, IT has become ingrained into business processes, and is even more important to customers.

“Previously, POS was about selling a product and collecting the money; now it’s not so much ‘point of sales’ but ‘point of service.’ There are lot of things running on it.

“What must the CIO do? He must go out, figure out what’s going on, and come back and be a sounding board to his CEO (chief executive officer).

“For instance, my boss has a lot of ideas, and some of them are fantastic, but the problem is that technology has not reached that level yet.

“Businesses have great ideas, and we have to be within the business – we have to become kind of a bridge [between what the business needs or wants, and what technology can do], and the only way to do that is to get out of our shell,” added Malik.

That means going to conferences, going overseas and seeing what others in the industry are doing, and meeting a lot of people.

It was view that his fellow panellist Goh Eng Choon, head of IT at Eversendai Corporation Bhd, concurred with.

“The CIO has to be exposed to the various types of technologies and innovations in the market. So you have to read a lot, explore a lot, do a lot of POCs (proofs of concept), and speak to a lot of people,” he said.

“That’s the only way how you can come across technology solutions you never before considered and can then incorporate them into your annual IT plan,” he added.

That annual IT plan is also how a CIO can contribute to the business, Goh noted.

“Every year, senior management will sit down and look at the crystal ball and discuss where they want the business to be two or five years down the line. Say, for Eversendai, it is to be a two-billion-dollar company by 2017.

“In order to reach that, senior management will brainstorm: How are we going to get there, what do we have to put in place for us to get there?

“From a CIO standpoint, I will look at how we’re going to become a two-billion-dollar company – we will need to get things done faster, there must be fewer mistakes and more collaboration in real time – so what is the technology we need to put in place to enable people to work faster, information to be shared, to the right person at the right time?” he added. “Everybody wants IT today,” he said, “and we’re not just talking about young doctors.”

The company – which has 24 hospitals in Malaysia, two in Indonesia, one each in Thailand, Australia and India, and “a few more in the pipeline,” he said – has got three hospitals running their entire workloads on this application.

Yet at a recent meeting with doctors, one of them “told me to throw away the application because it couldn’t do everything,” he said. “One of them wanted analytics because he publishes in medical journals.”

“They’re so used to doing everything on their iPads, they want to do everything on it. We (IT) start from this end, they start from the far end. Facebook has done this, it has thought them how to upload pictures and videos,” he chuckled.

“On the backend, our HIS (hospital information system) does about two-billion-dollars-plus worth of calculations. Healthcare calculations are very different from banking calculations, because healthcare is 24 hours – every single minute, patients have something to do or are doing something, consumables are constantly in use, and so on.

“We calculated that there are 2.2 million different transactions going on every day on our backend systems,” he added.

Meanwhile, session moderator Karamjit Singh, also the founder and CEO of DNA, spoke about a former CIO who told him that most of his time was not spent on reading about technology, but about managing people.

Eversendai’s Goh said he could relate to that. “Technology is forever changing, so no one person can keep up.

“Most of my time is spent managing people, and managing issues. Tech is not really a big part of the role, so I depend a lot on vendors and partners to tell me what’s going on – but you still need to understand technology enough because vendors will promise you everything can be solved with their technology!”

Next page: Their pain points and visions of the future, and the role startups can play