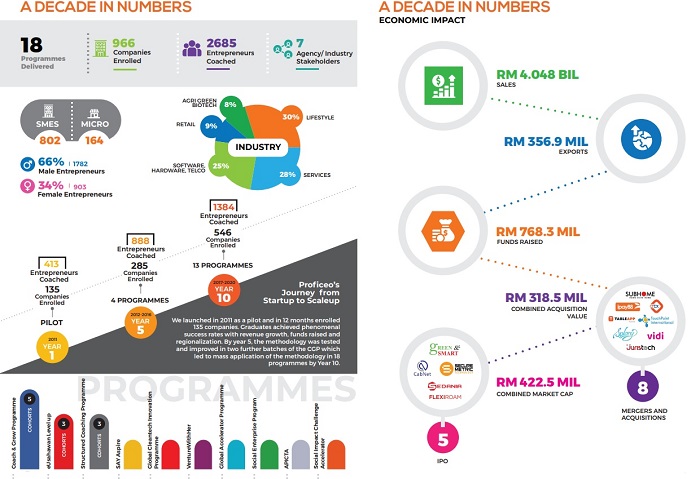 “We have to ask ourselves the hard questions,” say Renuka Sena and Dr V Sivapalan founders of leading entrepreneur coaching consultancy Proficeo Sdn Bhd. By that the duo mean, the Malaysian government and its relevant technology ecosystem development agencies which are aiming to create Malaysian unicorns/soonicorns or the US$100 million revenue startups, but yet will struggle to identify the most promising companies in the pipeline who have a better chance of making it.

“The MSC (Multimedia Super Corridor) is 25 years old now and we still haven’t organised ourselves well enough to identify which are our most promising companies coming through the pipeline,” says Sivapalan referring to the 1996 launched economic transformation plan that was Malaysia’s bold attempt to leapfrog from an agrarian and commodity economy, to a technology based one. “We need a more organised way to operate,” he stressed. Renuka and Sivapalan (pic), both linchpins of Malaysia’s startup ecosystem who are each closing in themselves on hitting 25 years being in the ecosystem, are not interested in laying blame anywhere.

Instead, they firmly believe it is time to be a data driven ecosystem in identifying and helping grow a strong pipeline of the best of Malaysia’s startups. The data will, sans guesswork or favouritism, help determine which are the best startups that deserve further funding to accelerate their growth. They are suggesting this because they now have the data themselves, thanks to their report, Proficeo: A Decade of Impact, which clearly shows that supporting the best Malaysian startups with funding injections, gives Malaysia its best chance of creating tech winners.

"The bar must be set high,” Renuka stressed. The key takeaway for her is, “Find the top 20% of any programme and support them with funding and customised coaching as they grow and we will see high growth companies emerge.” This has to be a long term game. “If we keep track of their growth and continuously provide further incentives when they achieve targets, we will develop a pipeline of high growth investible Malaysian companies. This is how we find and back the best companies all the way,” she adds.

To be sure, neither one is suggesting the government stop supporting a wider swathe of companies. They are instead urging for more focused support for those who are able to rise above the rest – strictly based on their performance.

The key pillar for this to happen has to be collaboration between all the agencies to share the performance of startups that go through their programmes. The silo mentality and reluctance to share data has to take a back seat to the greater cause of creating, at the least, winning regional tech companies, if not global ones.  Without this, Malaysia’s often lofty tech ambitions risk being mired in mediocracy and wrapped in fluff language instead of substance. And you can kiss goodbye to the aspirations of creating five unicorns by 2025. The story A Decade of Impact tells

Their belief in letting the data tell the story is borne by their own experience in being involved in various entrepreneur development programmes over the years, affording them both an unparalleled big picture and granular view of the impact of these programmes.

Speaking of impact, Proficeo has an unrivalled one. Over the past decade it has helped contribute, via the almost 1,000 companies it has worked with, to deliver RM4.048 billion total contribution towards Gross Domestic Product, RM356.9 million in export revenues, and RM768.3 million in funds raised for startups, with 8 mergers/acquisitions with a combined acquisition value of RM 318.5 M and 5 IPO's.

Its programmes include the highly successful Coach & Grow Programme (CGP) for Cradle Fund Sdn Bhd that ran from 2011 to 2021 before Cradle shifted direction and stopped funding it, the Structured Coaching Program for Cradle grant recipients, the MaGIC GAP (Global Accelerator Programme) and also MDEC's eUsahawan Level Up which is focused on micro entrepreneurs.

All in, this translates to 18 programmes with seven industry and agency partners while coaching 2,685 entrepreneurs across 966 companies, the majority of which were tech based. The loud message that comes through from all the data they have crunched and presented in A Decade of Impact, is that betting on the best companies, as measured by their growth, with funding throughout their journey, really helps drive further growth.

A Decade of Impact is a story of two data sets. One from the CGP and the other from all the other programmes. The more granular data they have comes from the CGP which ran for 10 years. With Proficeo involved from conceptualisation to running the programme, CGP saw 742 people (companies can send more than one person) accepted from 3,322 applicants from 577 companies during the five cohorts from 2012 to 2021. A critical condition for joining the programme was the sharing of company performance in the preceeding year and tracking them for a full year after the engagement ended. Why?

Having been involved in coaching long before CGP, the duo were convinced that proper coaching made a difference. But CGP was their chance to demonstrate this, backed by data. “We didn’t have to say ‘Trust Us’, we would have the data,” said Renuka. “We needed a base line in which to measure the effectiveness of our year-long engagement with the companies,” said Sivapalan.

And the post year performance was critical to answer the question of the program’s lasting impact, instead of the period of the coaching. This would tell them if the participants had learned enough during the CGP, that they were still applying the lessons and if those lessons were still effective.

CGP also dangled an interesting carrot to the companies. The top 20% in each cohort, selected based on qualitative and quantitative metrics, would receive additional support via a special Investment Readiness Programme (IRP) that helped them be more attractive to investors. This was introduced from Cohort 2 in 2014 when Proficeo realised the companies needed help with raising funds.

The impact was significant. When the top 20% received the IRP training, 79% of them went on to raise funding as well – not just via venture capital but IPOs or venture debt or bank lending as well.

But the penny really dropped for Renuka and Siva on the impact of coupling funding with coaching in 2015 with Proficeo’s involvement with Cradle’s Structured Coaching Programme that for the first time made coaching compulsory for startups that received funding in the form of grants or venture funding from Cradle. They credit the late Nazrin Hassan, Cradle’s CEO from 2005 to 2018, who realised that just giving companies funding without helping to raise their management and leadership capacity to make full use of the finding, resulted in lost growth opportunity.

This was when they saw the big difference funding made when paired with coaching.

When compared to the CGP, which offers no funding to the participants, the impact of the Structured Coaching Programme led to 51% of the companies doubling their revenue during the programme, against 30% among the CGP. “That’s a huge difference,” Siva stresses.

The common denominator for these top 20 performers? All had received funding at some point, in their journey. Some more than once.

To Renuka and Siva, this is vivid proof in the value of identifying the top performers and backing them all the way.

Getting out from being perennially under the radar

“Look, the government is spending millions on these various programmes but who is measuring the impact the programmes are having on the companies? On how those companies are then, through their growth, contributing back to the economy. We wanted to measure this as we wanted to see the contribution back to the country,” said Sivapalan.

How else will the country identify, from among the thousands of companies, which are the ones that can grow and eventually become the US$100 million company or uncorn and contribute back to the country? And with many technology companies part of some programme, somewhere in the ecosystem, why not have such a system in place to measure their performance and identify the ones that should be backed into becoming winners, Sivapalan poses. “That’s how you get your hundred million companies and unicorns,” he contends.

And with Cradle already identified to be the hub for startups in Malaysia, Renuka and Sivapalan feel that Cradle should be the obvious owner of this system to track the progress of all startups in the country, no matter which programme they are part of.

Carrying on as usual will mean still not being able to identify the most promising companies and relying almost on luck. “There’s a reason Malaysia is always described as being under the radar in the region. We cannot identify our most promising companies, we don’t have a pipeline. That’s why the big VCs are not coming here. They don’t see,” says Renuka.

“We need to change this. We need to be data driven and results oriented. Then we have a chance to be winners,” said Sivapalan.