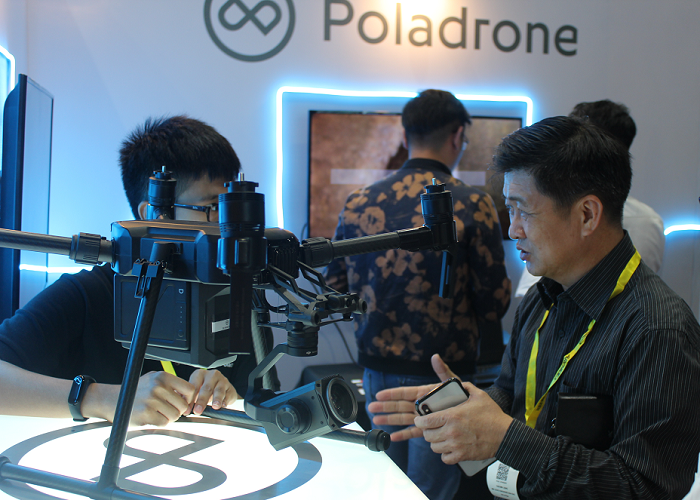 It was a love affair that started at 15 when Cheong Jin Xi was studying in Australia in 2006. “The drone hobbist community there is quite strong with groups of people across the whole region building their own drones – assembling, flying or racing for leisure.” Cheong too.

With this deep-set interest instilled early on, Cheong continued to pursue his love for drones, especially drone photography as a weekend hobby when he returned to Malaysia. In fact, when Poladrone Sdn Bhd was first launched in 2016, Cheong’s focus was on photography, completely different to what it is involved in today. “The initial idea was to make drone photography easy,” he says, explaining that the name of the company was inspired by combining the words ‘polaroid’ and ‘drone’.

The primary reason that drove Cheong to start his company was the lack of drone expertise in Malaysia. “When you match the lack of expertise with market demand and the solutions drones can offer, there is a very clear gap in the market.”

Today, Poladrone has 21 people with software engineers and data scientists making up more than half the team. As far as hiring drone talent goes, Cheong looks for people who like things that fly in addition to having technical knowledge. “If you’re looking for drone experts, you are not going to find them anywhere globally. But a lot of skills that are required for drones, especially in development, rely on very fundamental programming skills that can be found in other robotic companies,” he shares.

While still in the early days, Poladrone bounced around the idea of offering other services beyond photography such as surveillance and public safety. Cheong quickly realised, however, the challenges of technology and privacy regulations in this particular field. “So the next natural step we took was in a space with limited players – agriculture,” he explains.

“One problem that big plantations have is that the management often don’t know what is happening on the ground. You would think that an oil palm plantation knows how many trees they have, but they have no idea,” he says.

Cheong reveals it is of great importance for plantations to know the number of trees at the site because it “will correlate directly to the fertiliser allocation and the use forecast”. He further explains: “Even a 1% off will translate to a few million [in cost] for them.”

Currently, six of the oil palm plantations in Malaysia including Sime Darby, the largest plantation company, are clients of Poladrone’s. Others include small medium sized plantations in the range of 30,000 to 40,000 hectares.

On top of offering its drone services for auditing in agriculture, Poladrone also distributes drones for DJI Enterprise, the largest drone manufacturer in the world based in China. “They control around 75% of the market share globally. This distribution agreement opens doors for us to sell to a lot of different industries.”

Some other areas for drone tech is surveying and mapping for infrastructure, public safety and civil defence, as well as oil and gas. While there are other prominent Malaysian drone tech players such as Aerodyne, Cheong believes Poladrone’s differentiating factor lies in its in-house built analytics solutions.

“A lot of the players in the market take third party solutions from Europe and United States. The accuracy of these solutions, because they are not customised for our local market, will at best be 96% whereas we guarantee our clients 99% accuracy,” says Cheong. From setting up in Penang in its early days, Poladrone is now based in Cyberjaya, the digital economy hub of Malaysia. It’s a logical choice as Futurise Sdn Bhd, a wholly owned subsidiary of Cyberview Sdn Bhd, is focusing all its energy on developing the Drone Economy and ensuring it is given priority to develop within a safe environment and testing ground in Cyberjaya.

Cheong shares there are many challenges regulatory-wise. Among approvals needed for drone flight are from Malaysian Communications and Multimedia Commission (MCMC). Meanwhile, drones with cameras require the green light from the Department of Survey and Mapping Malaysia (JUPEM). “One those two approvals are granted, we need a civil aviation permit from the Civil Aviation Authority of Malaysia. Each of them has to be granted consecutively,” Cheong explained.

In response to this struggle, Futurise has cut through the layers by securing a blanket permit allocating a field as a testing ground for drone activity. This bypasses the lengthy process of startups applying for permits and provides them with an accessible testing bed.

Not surprisingly, Cheong commends Futurise’s efforts of spearheading conversations with the regulators. “This is really good because, quite often with regulators, it’s not that they want to restrict the sector, it’s just that they just don’t understand the space well enough.”

For now, Cheong says, analytics is offered as a service to its clients. “But it is only a matter of time before we decide to package it and sell the solution.”

As for its next game plan, Poladrone intends to enter drone automation to cover use cases of agriculture spraying. Although pushing adoption will be challenging, Cheong is excited to venture into this area. “We really want to push forward with our solutions within the next one to two years to really open up the market and create use cases.”

In terms of regional expansion, Poladrone is looking to potentially raise a Series A round next year, set up offices in Indonesia, Thailand and Vietnam due to these countries’ large agricultural footprint. As of now, the startup has clients spread across Southeast Asia with its channel strategy. “We currently have some partners in these countries that buy solutions from us and sell in their markets. But the challenge is that we are not able to provide them with the same level of support as Malaysia in terms of product demos or technical issues,” says Cheong who is hoping the Series A round next year will help him solve this issue.