MOST people who set life goals they hope to achieve by the time they are 30 years old would probably opt for owning property, getting married, travelling the world or even perhaps – given today’s startup craze – becoming a millionaire.

But for social entrepreneur Wong Gwen Yi, more popularly known as Gwen, her ambition is to change the lives of 30 million people.

“I have always wanted to make a positive impact on people's lives, but I’d never put any numbers to it.

“One day, based on a friend’s comment that Malaysia had a population of 30 million, I decided to set a goal – which is to touch the lives of 30 million people by the time I am 30,” Gwen told Digital News Asia (DNA) in San Francisco recently.

While she is determined to achieve that goal, she remains open-minded on the ‘how.’

“It could be a product, an application, or even a book … I’m not sure yet,” she admitted.

Still, she seems to be making steady progress towards that goal. Over the past two years, she has been actively involved in a number of youth and entrepreneurship events.

Among the events she has taken part in – either as a participant, organiser, or volunteer – are Geeks On A Plane, TEDxKL, Global Startup Youth, the 4th Global Entrepreneurship Summit (which was held in Kuala Lumpur), the 5th Global Social Business Summit, and many more.

She was also accepted into the ‘Thiel Under 20 Community,’ and was sponsored to attend conferences in Harvard, Brown and Stanford.

The Thiel Fellowship (originally named 20 under 20) is a fellowship created by PayPal cofounder and venture capitalist Peter Thiel through the Thiel Foundation.

Gwen is currently pursuing her undergraduate degree at Minerva Schools in San Francisco.

According to Gwen, her passion for contributing to the community began during her secondary school years, when she was actively involved in raising funds for non-profit organisations and visiting orphanages under the Leo Club.

“I was having a terrible time in college, as the focus on extracurricular activities had shifted from social causes to social networks.

“Nobody cared about the beneficiaries; they just attended the charity event so that they could go the club after,” she lamented.

As part of her own self-discovery process, she said she began to join various two-day programmes that offered insights into the fields she was interested in.

The more programmes she attended, the more she noticed a consistent trend – most of them were entrepreneurship-related.

She then started to attend more events related to entrepreneurship and even took part in various startup-related competitions.

String of successes in competitions 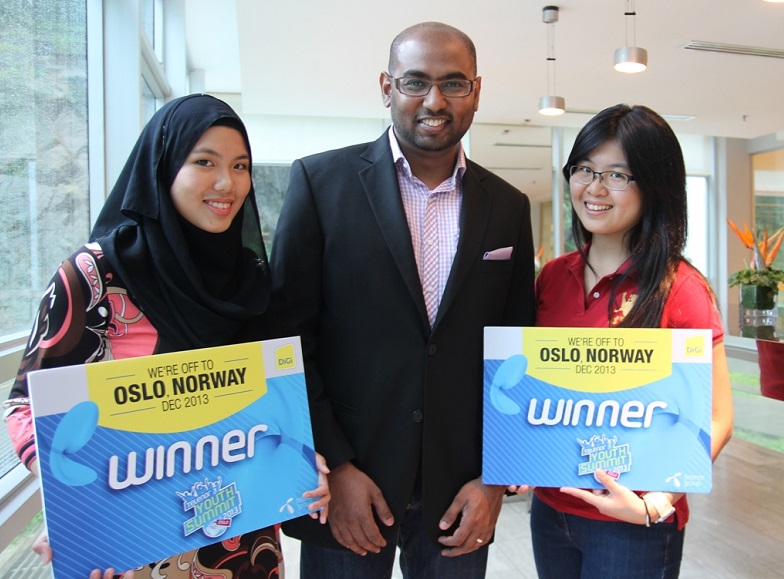 If DNA readers find her familiar, that is probably because she was one of the two winners to represent Malaysia at the first Telenor Youth Summit in Oslo in 2013. She won the ticket to Oslo by submitting an idea for an app that enabled the sharing of innovative learning tools and tips among teachers.

Four months later, she and her team were one of the top three winners at the Mega Startup Weekend, a three-day event that brought together more than 300 entrepreneurs in the region.

Earlier this year, she and her team won a regional hackathon organised by MasterCard and AngelHack. The winning app, called ‘One Small Step,’ encourages girls and women to better understand the technology around them by getting them to engage with coding-centric games.

“What inspired us to come up with this idea was the realisation that women are still severely under-represented in technology.

“With that in mind, we decided to create an app that would be useful for anyone regardless of age or gender, who has a genuine interest in understanding technology,” said Gwen.

Later this year, the entire team will be heading to Silicon Valley for the MasterCard Grand Finale. They will be competing for a grand prize of US$100,000 and be in the running to further develop their app, with mentoring and support from MasterCard.

Although she has enjoyed great success in competitions, Gwen admitted that she has yet to bring her winning ideas to market.

When she wanted to turn the idea she had submitted for the Telenor Youth Summit into reality, she learned an important lesson – not all problems can be solved with an app.

“I realised that the teachers who would benefit most were those in teaching in rural areas – but they may not be blessed with good infrastructure, let alone own a smart device,” she said.

“I learned the importance of factors like telecommunications infrastructure and devices,” she added.

Timing was also perhaps a factor. If Gwen’s idea had come at a time when smartphone penetration was higher, as it is today, it would have seen better chances of success.

As for her team’s winning app at the MasterCard hackathon, she said One Small Step will be put on hold temporarily.

This is partly because the app would require the contribution of experienced game developers. The whole idea of One Small Step was to encourage more women to be interested in technology by incorporating the basic principles of coding into a game.

Unfortunately, none of her teammates have any expertise in game design.

“It was a great idea, and we would love if it was brought to fruition,” said Gwen. “We just don’t have the capacity to build it ourselves at the moment.”

Nevertheless, she believes that everything will come together in the end. After all, like any successful entrepreneur, she is prepared to pivot when other opportunities arise.

Two Malaysian youth off to Telenor summit, chance to hobnob at Nobel event

A global hunt for innovation