“We have the aspiration to make Cyberjaya into a global tech hub in five to ten years. In the past three years, there has been a lot of progress with the mushrooming of startups and growth of multinational companies,” said Siti Shafinaz Mohd Salim, the acting head of technology hub development at Cyberview.

The demo day attracted interest for investment amounting to US$2.7 million (RM11.2 million) from investors and venture capitalists. Under the guidance of Cyberview and the programme manager, Finnext Capital, the startups participated in a five-month long process of mentorship before the demo day.

First to pitch their solution was EPC Blockchain which aims to monetise carbon credits from energy projects to benefit small project developers. The chief technology officer, Tan Lim Soon Fu explained how the platform works. “Using distributed ledgers to track energy generated and saved and the carbon emission, we can aggregate carbon credits from companies, help them monetise on that and do the settlement.”

Next to pitch was Touchless, a smart parking system using IoT, AI and Big Data technologies for easier and faster parking access. According to Mohammed Aljlal: “One-third of all parking operation hours are spent manually handling multiple parking systems. This results in higher initial and maintenance costs for owners.”

As for MedKad, it is a startup offering cost-effective solutions for companies to manage staff medical benefits. MedKad is the second startup founded by Ezuan Yaacob after selling his first startup, Job4Locum, to a Japanese company.

With a background in the healthtech industry, Ezuan shared, “The idea for MedKad was triggered from seeing clinic owners facing payment problems from their panel providers. Also, employers have limited choice in terms of monitoring at reasonable prices.”

The fourth startup, Cheqqme, is a gamified marketing platform aimed at converting a company’s online users to walk-in users at stores. “Our mobile app activates user’s interest in certain campaigns but the user must finish the campaign in the physical shop itself,” says CEO and founder Wei Chee Lee, who has more than a decade of experience in digital marketing.

The final startup to present its solution was Beebotic, a food delivery robot. While its current focus is sushi restaurants which include Sushi Zanmai, the CEO Ahmad Ahsan said it can be deployed in other restaurants too. The company is raising funds to build an IoT-enabled robot that can be deployed anywhere in the world while being serviced and maintained remotely.

"We mostly work with new restaurants and interior designers to incorporate our robots since it requires its own track," he said, explaining that this way Beebotic's robots do not intervene with humans on the floor.

"Our robots are designed to work 24 hours, addressing the hiring crisis of restaurants needing waiters for three separate shifts," Ahmad said, while also claiming that the robots can provide lifetime value with each robot built to last ten years. 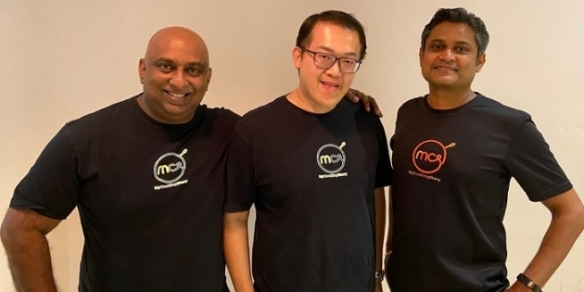