CROWFUNDING is just about the most empirical method of getting market validation for a product under development, and Singapore-based technology startup Innova Technology must certainly be pumped over its pledge effort on Indiegogo.

Seeking a total of US$5,000 on the crowdfunding platform for its Bluetooth 4.0-based Duet tracking device, it has already hit US$96,120 in pledges, with about 51 hours to go as we write this.

Duet's built-in alarm immediately beeps anytime the user is more than 10m away from his or her phone. By pressing a button on the device, the user can also get the phone to ring – even if it had been in silent mode – so that it can be located. Duet can also be attached to other items – wallets, handbags, etc. – with the Protag app constantly monitoring such tagged items. The app allows up to 10 items to be tagged, and displays their GPS (global positioning system) location.

The fact that Innova Technology has essentially busted its pledge goal on Indiegogo shows that the market is ripe for such a device, especially given the prevalence of smartphones that run Bluetooth 4.0 technology, said the company’s marketing head Johnathan Leow (pic).

“It tells us that we have chanced upon a hungry market, and that there is very, very big demand for phone loss prevention solutions,” he told Digital News Asia (DNA) via email.

Certainly one venture capitalist firm is banking on this market demand. In 2012, Singapore-based technology startup incubator Red Dot Ventures invested S$589,000 (US$480,000 at the rates then) in Innova Technology, according to Tech In Asia.

The company currently has a headcount of 10 staff, with four of them dedicated to overseeing iOS and Android development, as well as backend servers. Its products have rolled out in over 20 markets, including Malaysia, Singapore and Thailand in South-East Asia. Its No 1 market has been the United States, according to Leow.

Given that it already has such funding behind it, why did Innova Technology decide to go the crowdfunding path with Duet, and why Indiegogo in particular?

“We chose the crowdfunding path chiefly because we needed to validate with the mass market whether losing phones is such a real pain, and if people are willing to pay for a solution,” said Leow. “And we did actually use the Red Dot funding, as it gave us the funds to make this validation happen.”

“We chose Indiegogo because of the ease of setting up a campaign there, compared with the three to four weeks’ approval process that Kickstarter requires,” he said, adding that the delay would have been an opportunity cost.

“We needed to validate the idea quickly,” he said.

Leow also acknowledged that its US$5,000 initial pledge goal was deliberately set low because Innova Technboogy’s main aim was to validate the viability of the idea.

“And the results have been very positive so far,” he said. 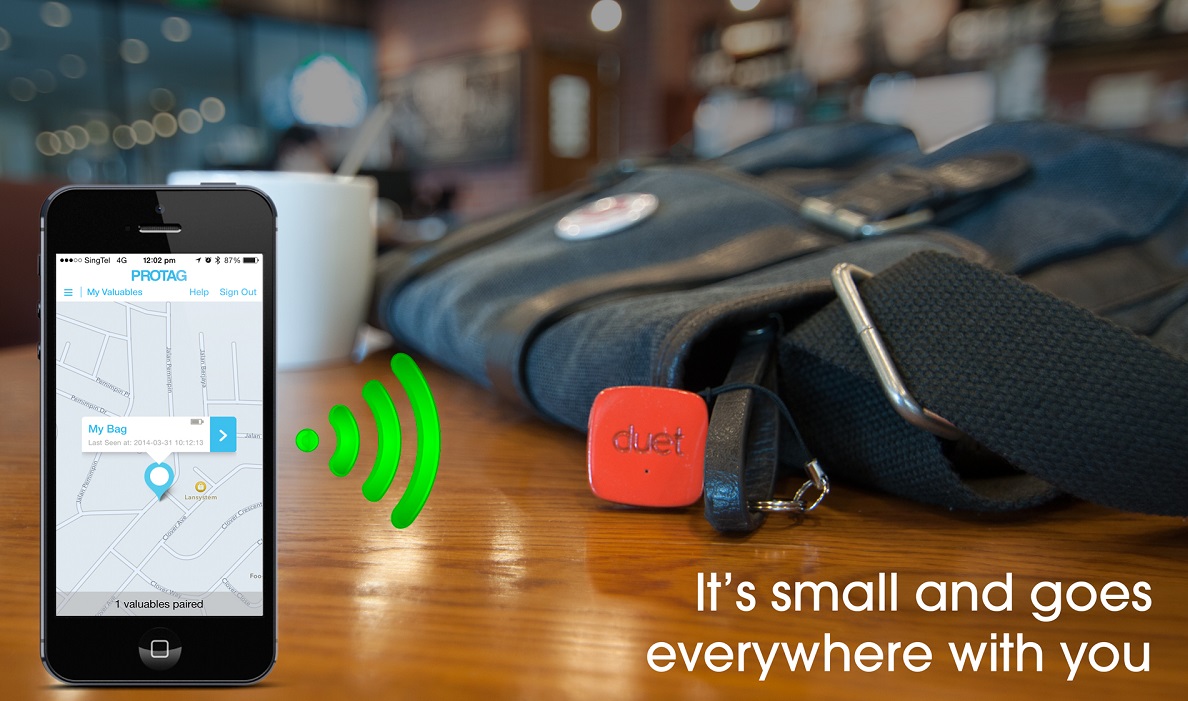 Innova Technology’s first two products were the Protag G1, which has been phased out, and the Protag Elite.

“The main differences between Protag Elite and Duet are the use case and the battery life,” said Leow.

“Elite is meant mainly to help business travellers protect their luggage, wallets and bags as they are highly mobile, and need to protect these items on the go.

“Duet, is a mainstream lifestyle accessory targeted mainly at protecting phones from getting lost.

“Elite also comes with a push-out rechargeable USB battery that lasts up to a year on a single charge, while Duet operates on replaceable 3V lithium batteries that last six months,” he added.

The company is now selling about 1,000 units of Protag Elite per month, and has sold 5,000 units of the Duet since its April launch, Leow claimed.

According to Tech In Asia, Innova Technology has been looking at telecom operators, banks, and novelty shops as potential distribution centres and partners.

“We've already secured a partnership with a major Singapore telco, and have also had our products distributed via a couple of banks and novelty shops,” Leow told DNA.

“We cannot name these partners at the moment due to confidentiality disclosure agreements,” he added.

The company also moved its production to China two years ago, saying this brought down costs by 30%.

“Our components are manufactured in China, but they are assembled inhouse at our headquarters for quality control purposes,” said Leow.

Duet is now only available for the iPhone 4S, iPhone 5, iPhone 5S and Android v4.3 devices.

“We don't intend to make Duet available for Windows Phones or BlackBerry as these platforms are still a very small minority in the market,” said Leow.

“We might look into Windows Phone towards year-end as the adoption rate has been slowly but steadily gaining,” he added.