IS this the beginning of Malaysia’s own ‘pay it forward’ culture? Something interesting happened over the past one year during the Coach and Grow Programme (CGP) funded by the Ministry of Finance and administered by Cradle Fund Sdn Bhd, the ministry’s agency that looks after entrepreneurs.

“The coaches and partners were very passionate about helping the entrepreneurs and I too fed off their heartfelt passion,” says Renuka Sena (pic), chief executive officer of Proficeo, Cradle’s partner in running the CGP.

With a budget of RM5 million (US$1.6 million), the programme is open to all tech companies, not just those who are recipients of Cradle’s grants, including those in the bio- and green tech, engineering, healthcare and medical devices, Internet and mobility spaces.

This was the first time such a programme has been run in Malaysia. The plan was to conduct three months of intensive coaching before the coaches took a step back and monitored the progress of the companies on a monthly basis.

The reality proved otherwise, with the coaching taking the full 12 months. “We were too optimistic in our expectations that the coaches and entrepreneurs would jell and start moving quickly,” says Renuka.

In reality, the relationships that needed to be formed for trust and credibility to be built in both parties took up to six months.

“That was when we started to see things happen,” she says. “And they all realised that this was a good programme but also that a programme funded by taxpayers had to show success for the Government to keep supporting it.”

As a result, despite the heavier time commitment that CGP demanded of them, none of the coaches pulled out or asked for higher compensation. Which was a good thing for Renuka as Proficeo would not have been able to pass on any cost increases on its side to Cradle.

Among the early challenges was entrepreneurs having to get used to external parties imposing KPIs (Key Performance Indicators) which they may not agree with. Adjusting the marketing plan, customer acquisition strategy or product roadmap were issues for many entrepreneurs too, in the initial stages.

But gradually the entrepreneurs realised there was no conflict of interest in the advice they were getting, and that the coaches had solid experience behind them. Even seasoned entrepreneurs benefited.

“It is a fantastic programme,” enthuses Cheong Yuk Wai, founder of MyBiz.net, who has been in the tech space since the late 1990s. It was not just the disciplined approach to strategy that he appreciated, but also the commitment of the coaches.

Underpinning this bond that started forming between the 20 coaches and their ‘wards’ was the sincerity of the coaches in wanting to see the entrepreneurs succeed, and in the realisation that the success of the entrepreneurs would reflect positively on them too.

But the entrepreneurs’ attitude and aptitude played a role too, with those who were proactive in reaching out to their coaches regularly tending to do better than those who stayed within the parameters of the programme.

She estimates that a third fell behind the KPIs set, mainly because this group was happy to keep on doing what they had already been doing. Coaches still met with them once a month just to monitor their progress.

Then you had entrepreneurs such as Cheong – even with his experience of being an entrepreneur in the tech space for over 15 years, he admits that his ‘go global’ strategy for MyBiz.net was flawed. 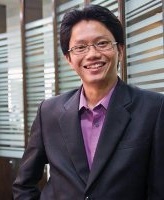 “I realised that our plans at that time to go regional and then global were flawed and had very little chance of success,” he says.

But post-CGP, he is confident he will have a more relevant ‘go to’ market strategy which he will launch within the next 24 months.

On the other end of the experience spectrum are first-time entrepreneurs like Yusno Yunus (pic) of Evenesis, who launched his online event management software company in 2010 before joining CGP in late 2011.

“I had no real coach or mentor before and found this experience greatly rewarding,” he says.

In fact, Yusno changed his business model from a B2C (business-to-consumer) to a B2B (business-to-business) approach in the second quarter of the CGP. Admitting to being caught up in the sexy nature of being in the B2C space, he credits his coaches with spotting the weaknesses in his business model and helping him target the right clients and scaling the business.

“We just spent the first quarter talking about the approach, strategy and the skill sets we had within the company and understanding what we had to do,” he says.

Yusno was fortunate that he also found a customer within the crop of CGP companies. One of the activities of the programme is to connect the companies to each other so they can share their CGP experiences and hopefully form a bond that will last them a lifetime.

“They did not have a proper event system which could scale, and so we partnered with them with a revenue share model in place,” says Yusno.

While not all was smooth sailing for CGP, enough has been achieved that CGP2 will soon be launched, but with a sharper programme thanks to the lessons learnt. Entrepreneurs can register now as applications are open with the closing date on July 15.

Next page: Q&A with Cheong Yuk Wai, founder of MyBiz.Net