The fact that MOL Global’s initial public offering (IPO) came in below expectations on a day of overall dampened sentiment in US financial markets could not detract from the fact that this was Malaysia’s and South-East Asia’s first technology IPO on Nasdaq in over 10 years, and that MOL Global was the first South-East Internet company to list on the exchange.

MOL Global, operating under the MOLG ticker, priced its initial public offering of 7.49 million American depository shares at US$12.50 apiece, trailing its expected price of $14.50 per share, according to Nasdaq.

Selling shareholders offered another 11.98 million shares, including Ganesh – the chief executive officer – who sold about two percentage points of his shares in company. He still owns 9.9%.

MOL Global shares opened at US$10.75, or about 14% under their IPO price, and closed at US$8.14, giving it a market capitalisation of about US$537 million (RM1.7 billion). The company raised US$169 million in its listing exercise, below the US$300 million it had hoped for.

MOL Global’s listing took place on a day that saw the NYSE Financial Sector Index sinking about 1.9% and the S&P Financial 100 Index dropping about 1.7%, Nasdaq noted. 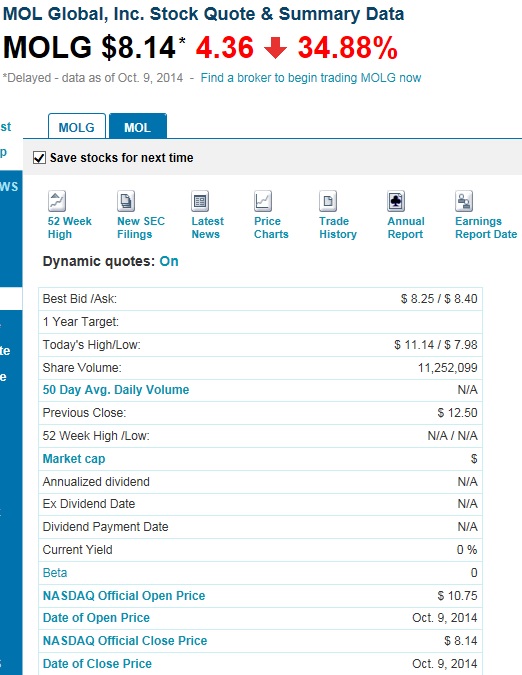 Having already recorded a string of firsts for MOL Global, Ganesh is claiming another – indeed, a world’s first, back when MOL first launched.

“We were the world’s first O2O company in the year 2000,” Ganesh told Digital News Asia (DNA), using an acronym that readers will start to hear of more, especially as Chinese Internet giants, Tencent and Alibaba build out their physical networks to complement their online presence.

They are only starting to do this now, while Ganesh started in 2000 by tapping into the 7-11 chain of convenience stores that his investor Tan also owned.

No surprise then that during the press conference at the Nasdaq Hq at Times Square in New York, Ganesh told DNA that Tan’s 7-11 chain proved more valuable to MOL Global than the money the Malaysian tycoon had pumped in.

That physical component is even more important today with Ganesh firmly positioning MOL Global as a proxy to emerging markets where credit card usage is low and e-commerce is growing at a faster clip than credit card penetration.

And with a new generation of savvy online users showing their willingness to pay for games, buy virtual goods and shop online – but are constrained by their countries’ financial infrastructure – MOL Global’s O2O business model offers the ideal solution. “The DNA (deoxyribonucleic acid) that we have built at MOL Global is that we can look at which payment methods work in particular markets and complement them. We don’t go in and try to change a system that exists,” Ganesh said.

Currently in 13 countries, and with an amazing 970,000 physical outlets that offer consumers the option of purchasing MOL Points, used for gaming; and MOL Pay, used for e-commerce; and with a deal close at hand with a company in India to add over 200,000 more outlets, Ganesh argued that MOL Global has also built a model that is replicable globally.

That gave him the confidence, during his short speech at Nasdaq, just prior to the stock being traded, to declare, “This is just the beginning.”

Karamjit Singh reports from the Nasdaq floor in New York at the invitation of MOL Global. All editorials are independent.