SOONER or later, most startups will have to raise funds, which means meeting all types of investors, from venture capitalists (VCs) and angel investors to companies looking to acquire. The 17th DNA-TeAM Disrupt panel discussion on April 23 threw up some cautionary tales.

Cheryl Yeoh, who recently returned to Malaysia to take on the role of chief executive officer of the Malaysian Global Innovation Centre (MaGIC) after having spent the last few years in the startup scene in the United States, had perhaps the most damning one.

Yeoh, who had shut down her first venture and sold her second, Reclip.It, to Walmart Labs, revealed that the retail giant was not the first interested buyer.

“This is one of those failure stories. A different company had expressed an interest in acquiring us before Walmart came into the picture, for a lot more money,” she told a full house at the panel discussion.

This other party had all the right connections, markets and resources that could take Reclip.It to the next level. “It was a match made in heaven, really,” said Yeoh.

“We were in such deep discussions – they asked how we came to this model, how we built the product, what technologies we used … and we thought the deal was about closed,” she said, adding that her startup had stopped speaking to other interested parties and investors during this time.

“Then they started stalling us, and two months later they dropped the deal … . Instead, they hired some people and copied our product straight up,” she said.

Yeoh said that she decided to not take any action because this other party was deep-pocketed and well-connected in the Silicon Valley ecosystem, plus she didn’t want to be dragged into long, legal entanglements.

She decided to walk away and get on with her life. “I have spoken to a lot of entrepreneurs and investors since then, and this happens a lot more than you think in Silicon Valley,” she said. “it is hardly ever shared because it’s embarrassing, really. You failed.”

She retains her optimism though, saying that “despite this, generally I think it’s good to share ideas.”

DNA-TeAM Disrupt is a monthly gathering and panel discussion organised Digital News Asia (DNA) and the Technopreneurs Association of Malaysia (TeAM). Joining Yeoh at the panel discussion were Slasshes & Dots founder Azrul Rahim, who sold his solution JomSocial to a US company; and Aaron Gill, head of products at MyTeksi, known as GrabTaxi outside its home market.

The panel discussion, which had the theme Leadership lessons from startups, was moderated by DNA founder Karamjit Singh. IP ain’t gonna save you

After hearing Yeoh’s tale, the panel discussion took a tangent to whether Reclipt.It should have protected its Intellectual Property (IP), and how important it was to do so.

“It depends on what kind of technology business you’re in. If you’re in software, apps or services, I don’t know if it’s very useful until you’re at a later stage,” Yeoh (pic) said.

“You can patent some things initially, and if you’re successful, then that is valuable. But if it doesn’t go anywhere, then that IP is worthless – nobody is going to buy it,” she said.

Many of the other entrepreneurs in the room also admitted that haven’t filed for IP protection either.

“Ideas are worth a dime. Everyone’s got good ideas,” said Yeoh. At the end of the day, it’s about execution – which is also why you shouldn’t be afraid to share your ideas, because nobody’s got all that free time to snatch at every good idea. I’m for no IP, unless you’re doing hardware.”

Another entrepreneur from the floor however argued that the first thing many VCs in Malaysia ask is whether the startup owns any IP.

“I think it’s the culture here,” said Yeoh. “East Coast VCs were like that too. They wanted to see revenue projections, 40-page business plans, and IP; while West Coast VCs were the total opposite.

“The other company stole your idea; isn’t that evidence why you need IP?” he said.

“Even if our IP had been protected, we were against guys with deep pockets, and we didn’t have the money to sue them,” Yeoh said.

“As an entrepreneur, was it really worth my time and effort to get an entangled in a lawsuit? I had to move on,” she said.

She noted that it was rare for a startup to win a long, drawn-out legal battle against a big company.

“There’s only been one in recent times,” she said, referring to TechForward filing a lawsuit against electronics retailer Best Buy in 2009 over misappropriated trade secrets.

In that case, TechForward’s VCs First Round Capital and NEA funded the lawsuit, and a California jury in December 2012 awarded TechForward US$22 million in damages, and another US$5 million in punitive damages.

‘Dumb money’ is good too

Startups open themselves to these kinds of situations because it’s rare for them to go all the way on their own. Even the ones successfully generating would sometimes need outside funds to scale.

When they do, they should look for ‘smart money,’ urged MyTeksi’s Aaron, referring to investors who bring more than just cash to the table.

“Raising money is a full-time thing, and when you do, you should look for smart money – investors who can get you access to markets, networks and the superstar employees you couldn’t afford to hire before,” he said.

Such well-heeled and well-connected individuals also have a wealth of experience they can draw on too, and can give any aspiring entrepreneur valuable advice.

However, one shouldn’t scoff at ‘dumb money’ either, said another member of the floor, Dr V. Sivapalan, chief evangelist at Proficeo Consultants, which mentors and coaches startups.

“Not all of us startups will have the traction or the brandname that MyTeksi has, so I always tell my startups, if you need money and someone wants to give it to you, just take it,” said Sivapalan, also a cofounder of TeAM.

Next Page: Getting the right talent, equity and regrets 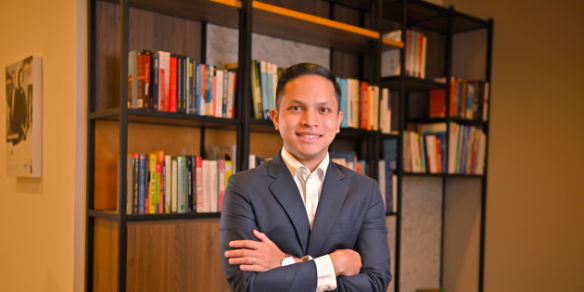