Disrupt: Raise funds in 6mths, or it might be too late! 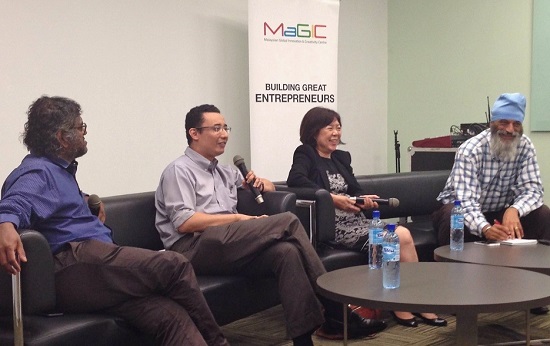 ENTREPRENEURS should go out to raise funds in the next six months as the window may soon close, with increasing signs of a possible global economic slowdown in the near-term.

“The window for funding may be tightening, so entrepreneurs should go out and raise funds soon and not procrastinate,” said Teak Capital managing director Chok Kwee Bee.

“Of course, I don’t have a crystal ball, but I think that there are signs that we need to be a bit more cautious,” she said at the TeAM-DNA Disrupt panel discussion in Cyberjaya yesterday (Dec 17).

Last month, Japan announced that its economy had entered its fourth recession in six years, while British Prime Minister David Cameron warned that the world economy could be heading for another slowdown.

In Malaysia, the country’s economic growth next year will likely come in at the lower end of its 5%-6% forecast, said Abdul Wahid Omar, Minister in the Prime Minister's Department.

Also, the weak demand for oil, resulting in declining crude oil prices, have hurt the Malaysian ringgit, which is now trading at RM3.48 per US dollar, versus the sub-RM3.20 level six months ago.

“When the economy slows down, funding will be affected. It is not that VCs (venture capitalists) are not funding – we will still go out and look for exciting deals,” said Chok. “But the funding euphoria may not go on for a long time.”

Chok, a DNA Digerati50, also recalled what happened during the last “dotcom crisis” in the late 1990s and early 2000s.

“Before the crisis happened, VCs were giving companies a lot of money even though they [startups] were not ready.

“At that time, everyone was so optimistic. It was so easy to raise money, and people were spending the money very fast.

“The crisis happened, and suddenly all the valuations came down. No-one wanted to fund these startups and they started running out of cash,” she said.

Thus, Chok advised entrepreneurs to raise money quickly so that they can build a war-chest and be able to sustain their business through the tough times.

This month’s Disrupt panel discussion had as its theme ‘The highs and lows of 2014,’ was hosted at Malaysian Global Innovation and Creativity Centre (MaGIC) in Cyberjaya, which also sponsored the event.

Disrupt is a monthly panel discussion and gathering organised by Digital News Asia (DNA) and the Technopreneurs Association of Malaysia (TeAM). The Dec 17 panel discussion was moderated by StartupMalaysia.org founder and TeAM president Dhakshinamoorthy Balakrishnan, also a DNA Digerati50.

Light at the end of the tunnel

This is partly because as far as the Malaysian technology startup ecosystem is concerned, most of the funding is driven by government-linked agencies or companies.

“I think at the stage of uncertainty, it is better to be prepared,” said Nazrin.

“Nevertheless, I still don’t think that the tech startup scene here will crash. The market here is a bit different. It is highly government-dependant and the government funds are already there,” he added.

Nazrin, also a DNA Digerati50, said that the strengthening greenback may in fact play into Malaysian entrepreneurs’ hands.

“The weakening ringgit may work to our advantage as far as investments are concerned. It is basically cheaper deals for the guys in the region,” he said.

“I don't think it is all negative; I think we need to see it through,” he added.

Meanwhile, Chok said that Malaysian entrepreneurs are perhaps “pampered” too much – they’re easily contented and do not usually want to go beyond their comfort zones.

“Malaysian entrepreneurs are very lucky as there are a lot of government grants and funding available to them.

“Perhaps because of this, it somehow affects their hunger. I would like to see them be lean and hungry, to be more aggressive, to move faster, to think bigger,” she said.

Chok said that many times, it was the VCs who had to push Malaysian entrepreneurs towards executing their business plans.

“I think I would like to see the entrepreneurs do it themselves,” she lamented.

DNA founder and chief executive officer Karamjit Singh, who surrendered his traditional role of Disrupt moderator to act as a panellist instead, said that Malaysian entrepreneurs needed to be more aware of what was happening in the tech ecosystem around the region.

“I think entrepreneurs need to be more well-read. There are many entrepreneurs who are still clueless about what’s going on in the startup space,” he said.

Nazrin concurred, saying that he noticed that entrepreneurs from other South-East Asian countries were generally more aware of the regional tech startup space than Malaysian entrepreneurs.

“When I talk to entrepreneurs from Indonesia, Thailand and the Philippines, they know more about what’s happening in the region or in Silicon Valley.

“They just simply know a lot more ... perhaps we are too Malaysian-focused,” he said.

Besides encouraging Malaysian entrepreneurs to read more, Nazrin believes that the key for them to move to the next level is increased exposure.

“We need to get out more. A simple bus ride down south to Singapore is a good start. Spend some time there, get to know the people there … and you will get to raise your game that way – just by hanging around with the people there.

“You don’t even need to ask for money. Go out there, and mix with other people, and you will realise that the benchmark in other parts of the world are rising,” he said.

Digerati50: A ‘dash’ of spice, loads of audacity