GALASYS Plc, an integrated services and solutions provider for the amusement park industry in Asia, has acquired I Logic Solutions Sdn Bhd (iLogic) for up to RM7 million (US$1.97 million).

The acquisition marked Galasys’ first since it was publicly listed on the London Stock Exchange’s Alternative Investment Market (AIM) in May, 2014.

Galasys had earlier acquired the entire stake of Green Laser Technology Sdn Bhd, a Malaysian company which designs and sells self-service kiosks and ticketing vending machines. The acquisition was completed in December 2013, for an undisclosed sum.

Galasys, which provides ticketing systems and solutions to theme parks, said that the final acquisition price will be based on iLogic’s business performance between 2014 and 2016. The acquisition, depending on iLogic’s performance in 2015 and 2016, as well as other conditions, will be paid in a mixture of cash and the issuance of new Galasys shares.

“This acquisition will strengthen and consolidate our market position in Malaysia. The acquisition is also timely as it gives Galasys an opportunity to fast-track Clota’s launch in South-East Asia,” said cofounder and chief executive officer Sean Seah (pic).

Galasys’ Clota (Cloud Online Travel Agency) platform allows amusement parks to directly connect their ticketing systems to the platform itself, which is integrated with online travel agencies in China.

This provides an additional avenue for theme park operators to sell their tickets, and also provides online travel agencies with additional products to sell to their customers, according to the company.

iLogic provides leisure and entertainment solutions, point-of-sales solutions, passenger management systems and others, sold under the brand i-Concept and used at the Sepang International Circuit and the National Zoo of Malaysia.

The company, which was previously known as RCG Solutions Sdn Bhd, changed its name to iLogic in 2012. Its board members comprise Eng Kin Hoong, Ho Wai Hoe and Law Yee Wei.

In a statement to the London Stock Exchange, Galasys said that it will buy the entire issued share capital of iLogic for a total consideration that would be based on the aggregate of a multiple of two of its audited profit after tax, for each of the financial years from 2014 to 2016.

A check with the Companies Commission of Malaysia’s database for iLogic’s financial results was not fruitful, as “no information on account is available as the certificate relating to exempt private company was lodged” (pic). Galasys’ shares on AIM have been trading lower since the announcement of the deal. They had been trading at about 22 pence for the most part of 2014, but closed at 18.75 pence on Jan 6.

It is not clear why the shares are behaving this way, but industry observers believe that it may be related to the acquisition.

“I don’t think the acquisition price, which is two times of net profit, is a major issue. I think investors may be concerned about the dilution when it issues new shares to iLogic,” said an analyst who declined to be named as he did not cover the stock.

The analyst said that another reason why the share price was trending this way could be due to lack of awareness of the company.

Seah, in an interview with Digital News Asia (DNA) recently, said that it was only a matter of time before investors started paying more attention to Galaysys.

“I think investors want to see our performance being consistent before coming onboard,” he said.

To illustrate Galasys’ “potential value,” Seah compared his company’s financials with one of its rivals, accesso Technology Group Plc, which is also listed on the London Stock Exchange.

For the six months ended June 30, 2014, accesso Technology reported revenue of US$25.88 million, an operating profit of US$1.28 million and earnings per share of 2.33 cents. Based on Bloomberg data, accesso Technology’s estimated price to earnings ratio (PE) for 2014 was 34x.

Although the financial data above, especially each company’s PE ratio, shows that accesso Technology is indeed a bigger company in terms of revenue, it also reveals that investors are paying a premium for its shares – or that Galasys is trading at a huge discount.

Will investors finally start paying more attention to Galasys with its iLogic acquisition? Only time will tell, but one thing’s for sure – Seah will be keeping his fingers crossed. 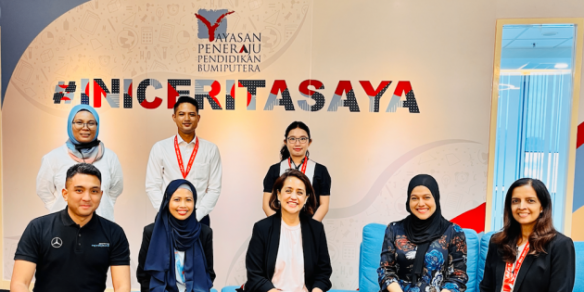