THIS week’s column is about a man I met during Echelon, the regional startup conference that was recently held in Singapore.

It was an impromptu meeting, the kind I love best, arranged by a mutual acquaintance because he thought it was a pretty cool story that I would like.

The man in question is Erwan Macé, the French founder of Bitsmedia, a Singapore-based mobile application development company he had started in 2009 and to which he returned full-time after leaving Google in June 2012.

Bitsmedia is probably best known for Muslim Pro, a popular app that offers prayer times and call to prayers for Muslims.

The app also features the full Quran with Arabic script, phonetics, translations and audio recitations, as well as a Qibla locator, an Islamic Hijri calendar, a map of halal restaurants and mosques.

Since its release to app stores in April last year, it has garnered more than 11 million downloads from around the world.

Erwan says that with one million active daily users, Malaysia is one of the biggest markets for the app. However, the top spot is occupied by France.

He says the biggest lesson he learnt with the app was not to make assumptions about where the biggest markets would be. He thought initially that it would be popular and used mainly in Muslim-majority nations.

“I then realised that in Muslim-majority nations, it’s easy to find out information such as prayer times and hearing the call to prayer due to the number of mosques.

“But when in countries where Islam is not the dominant religion, the app is most needed as people will rely on it for accurate information,” Erwan adds.

As insightful as it was to talk about Muslim Pro, that wasn’t the story that caught my attention.

When I encountered Erwan, it had been only over a week after his latest app – Mini Hug – had hit the Apple app store.

Mini Hug is an app that helps keep track of the number of hours and the kinds of activities parents and their children engage in.

Parents can accumulate points through each activity completed with their child and let the app track what activities have received the most or least attention.

Erwan didn’t come up with the idea for the app, he merely coded what was the brainchild of his seven-year-old daughter, Lia.

“I work from home most of the time, and with both her parents at home, our daughter was hoping to help her friends and other kids enjoy the same kind of privileged time she gets to spend with us,” he says.

Hearing him tell the tale of the app’s origins, one can’t help but smile over his sheepish guilt about at first delaying work on the app for a year, and then trying to delegate it to another developer. 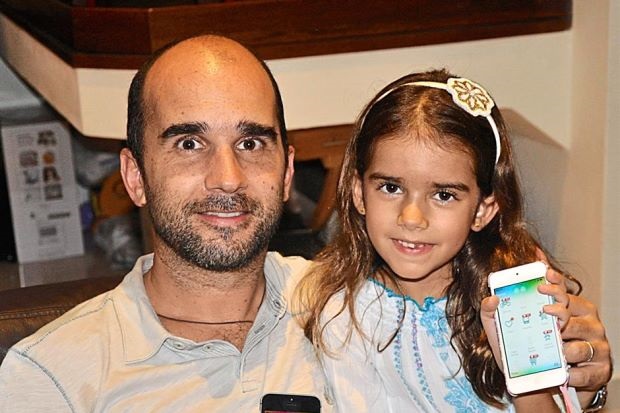 “My daughter gave me a look and said, ‘No papa, I want you to do it,’ when I suggested getting one of my colleagues to work on it. For her, it was an exclusive father-daughter project and she wanted the top guy, not anyone else,” he quips.

About six months of development work went into the app, with Lia giving full input into aspects such as design and how many points each activity gets awarded.

Its name is also another thing young Lia can take credit for.

“I thought since it was an app for her, I would call it ‘LiaApp’ or something like that and she told me that was a terrible name, suggesting ‘Mini Hug’ instead,” Erwan shares.

Since its launch, the app has received a few hundred downloads, with feedback and analytics insights already incorporated into a new version pending review by Apple.

But creating and launching the app was really only the first step of the project, with young Lia now tasked by her parents to handle marketing for it.

“We’ll be starting off with street marketing, we’re going to get some flyers printed out and taking her to where parents go like Toys R Us, then encourage her to talk to the cashiers, tell them about the app and ask whether they can help by letting her leave a few flyers,” says Erwan.

At present the app remains a free download. With monetisation plans for the future for Mini Hug and any other future apps, the Macé family already has a deal in place. It’ll be an even 50-50 split between father and daughter.

“I’m discussing monetisation with her now. I mean she’s seven, so it’s not like she understands everything.

“I would love to say that she’s gifted but she’s a regular kid. What I’m trying to do is instil in her a sense of what business is,” Erwan explains.

What about setting the money aside for college tuition?

“And I think that it would be unfair to tell her ‘this is all the money you made but actually it’s for school’, so I’m going to put it into an account and when she’s 18, she can spend it,” says Erwan.

Now, how cool is that?

A very belated Happy Father’s Day to all you dads out there making a difference.